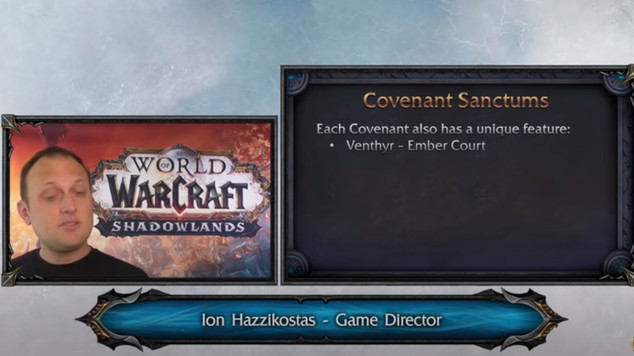 The new system in World of Warcraft: Shadowlands is called Covenants.  We've heard about these for quite some time, but the details remain vague.   What we know is that you will choose from one of four factions and that those factions will grant your character abilities.   Blizzard has stated that these will be "powerful" abilities, but we still don't truly know what that means.

Game Director, Ion Hazzikostas spoke about the path and opportunties that players will have once they choose a Covenant on the livestream.  You can view a recorded version of the livestream below.

The game will enter beta next week.  It will be feature complete and allow players to level up to max level.  You can sign up for beta on the official website by scrolling down and clicking on Opt-In.

The beta test will be the first look at the endgame content.

Hazzikostas says that Soulbinds are easily swapped out depending on your current goals.

Each covenant will have "Reknown".   You gain power within your Covenant by building Reknown.   You gain Reknown in a number of ways.  It is a metered progression, not an open grind like Azerite.   Hazzikostas said that they have catch-up mechanics built in to help alts and players that start behind the curve.

Each covenant has a Sanctum.   These are similar to Class Halls in Legion and Garrisons in Warlords of Draenor.

Hazzikostas covers quite a bit in the video.  It's worth watching if you have any interest in what is happening to WoW.