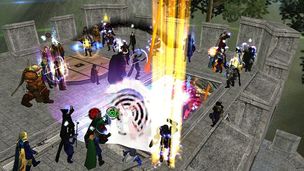 DAoC: Another Look at the Labyrinth
<b>Dark Age of Camelot's "Labyrinth of the Minotaur" Prepares to Put a Leaf in the Round Table</b><br /> <br /

How many games originally released in 2003 are you still playing? Dark Age of Camelot, the game that brought large-scale PvP to MMORPGs, is still going strong on the eve of its seventh expansion, "Labyrinth of the Minotaur." Last month, we featured enough LotM content to sink the Argo (click here to check out the first set of screens). Today, the spotlight shines on a new boss and a new all-realm Minotaur "Mauler" class.

"The Mauler is a unique class that mixes brutish martial arts with unique powers and spells. This brawling class channels earthen elemental powers, such as gravity, magnetism and auras to augment its combat abilities. Maulers wield ornate fist wraps in combat, often etched with magic runes and augmented by heavy weights."

Keep reading to learn more! What are your thoughts about this upcoming expansion? Let us know in the Ten Ton Hammer Forums today!