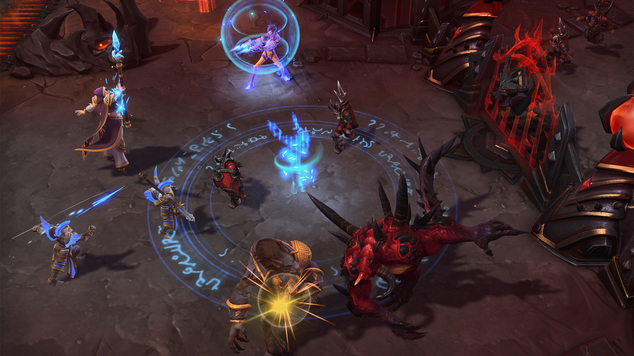 Dear Bigg: How Can I Deal With Diablo?
Max "Bigg" Hoskin answers your Heroes of the Storm questions. This time? Shutting down the Lord of Terror.

I keep wondering what the point of a Specialist is. Before the camp and tower changes, Heroes like Azmodan and Zagara were a real threat if left to their own devices. Now, it pretty much seems that any Assassin can take camps, and hold a lane with ease. So, what's the point in even drafting any Specialist? Besides Medivh, it seems that the majority of Specialists don't really have a role any longer, so it's better to take another Warrior or Assassin instead. Do you think that's true?

Hey Theriri, Diablo is annoying, isn't he? Diablo is one of the strongest tanks currently. The best way to play against him in Hero League is to ban him, since it's hard to coordinate a plan to beat him with random people. However, if you are matched against him, here are some things to keep in mind. Once Diablo charges in, he has a very hard time escaping. Heroes such as Garrosh and Arthas can deny any escape, making Diablo have to be certain to get a kill or he will die. You will also want some strong sustained damage such as Raynor or Fenix as well.

As far as your playstyle versus him, you should avoid walls as much as possible to deny any wallbangs that Diablo looks for. When Lightning Breath is activated, try to spread out from your team to only have one person getting hit. This is also a good time to attack him since he is immobile while channeling and can be easily hit with all spells. Overall, Diablo is a very strong tank which you want on your team rather than the enemy team. Try to keep his weaknessess in mind when playing against him and you will have more success than if you ignore them.

Max "Bigg" Hoskin is ranked #5 Grandmaster in Heroes of the Storm. He spends all his free time playing the game, and produces our Mind of a Master series. Have a Heroes of the Storm question you'd like Bigg to answer? Drop us a line on Twitter, Facebook or the comments section of our Tier List and Bigg will make every effort to answer it!