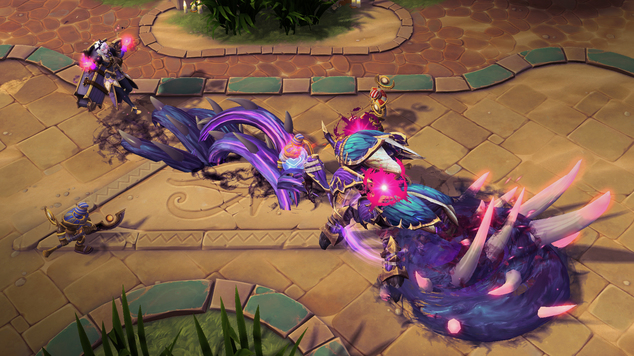 Dear Bigg: What's Your Thoughts On The Latest HOTS XP And Armor Changes?
Every week, Max "Bigg" Hoskin answers your Heroes of the Storm questions. This week? Major HOTS changes...

What are your thoughts on the Heroes of the Storm Tower/Keep XP and armor changes? Do you think it'll make HOTS too simplistic?

I think the armor change addresses the problem of having certain heroes on the same team. Heroes such as Raynor could have 50-75 armor for 3 seconds with a Yrel or perhaps a Uther on their team. This makes burst very weak and also makes it extremely difficult to kill a hypercarry or other priority target. This change allows them to add more armor giving heroes to the game as well, since they don't have to work around every other hero who can give armor.

As for the Tower and Keep experience, I think it is shifting the focus on how the game is going to be played. You are still going to want to take enemy buildings to open up the map but instead of XP, you will gain catapults every three minion waves when you kill a fort that will force enemies to respond. This should lead to more macro oriented play rather than snowballing an experience advantage and just deathballing every objective with your talent and stat advantages from your level advantage. My only concern is that Keeps give no XP as well. By the time Keeps are being taken it is often the later stages of the game. The lack of XP from Keeps will mean it is harder to close out a game without properly utilizing the catapults you have in each lane. It might be more common for games to end due to catapults and their pressure rather than one decisive teamfight.

I think these changes, particularly the Fort catapult change, will change how the game is played. I don't think it will necessarily be more simplistic, just shift the game's focus from teamfights to more macro oriented play.

Max "Bigg" Hoskin is ranked #5 Grandmaster in Heroes of the Storm. He spends all his free time playing the game, and produces our Mind of a Master series. Have a Heroes of the Storm question you'd like Bigg to answer? Drop us a line on Twitter, Facebook or the comments section of our Tier List and Bigg will make every effort to answer it!

HEROES OF THE STORM PTR PATCH NOTES – AUGUST 31, 2020
The next Heroes of the Storm patch has just hit the Public Test Realm and will be available for playtesting unt