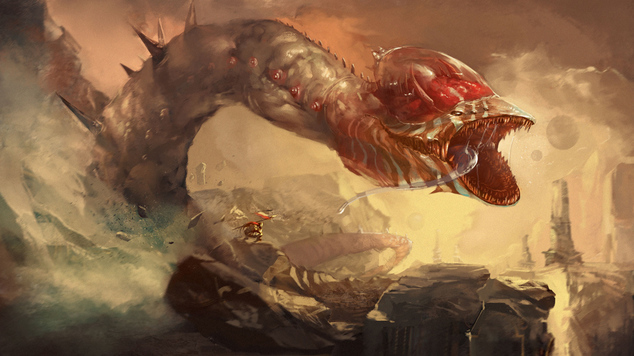 [Welcome to the second installment of my interview with Revival's Lead Content Designer: Chris Holtorf  a.k.a. "Ombwah" on the game's official forums. If you didn't get a chance to read Part 1, you can find that by following this link. If you want to find out more about what Revival is all about, go check out the game's official website. Shout-out to Chun Lo from Deviantart for the cover image for this interview, titled: Lovecraft's Dhole.]

(Continued from Part One)

TenTonHammer's Veluux: With Lovecraft and Howard's mythos playing a prominent role in Revival, there will obviously be no shortage of creepy cults worshiping creatures of horrifying origin. Can you talk about some of the driving themes in this world, and how some of these mythic entities will be impacting Theleston?

Ombwah: Some of the core themes in Revival are cycles of struggle and rebuilding, mystery and exploration, and the insecurity inherent in a lack of complete knowledge or mastery of our world. The gods and powers of the world are divided into three mindsets overall, those of the primal energies, or worldly powers: Elder Gods, Great Old Ones, and the Outer Gods

The Elder Gods represent what many would call the ‘natural’ forces of being, or are a patron of the wilds and the creatures of the world embodied. The elders will impact Theleston by working toward their own individual ends, but those ends are unlikely to destroy the world at its fruition.

The Great Old Ones on the other hand, came here from other worlds, in general seeking supplication or the worship of the people of the world. These creatures are independently thinking creatures, though they may have appetites that would bankrupt the world’s resources, and it is key that they don’t care at all about that. The Great Old Ones look out for themselves, and disregard the impact that their whims have on the world.

Distinctly different from both the other groups, the Outer Gods may or may not care about the effects of their interactions, as they are more or less ineffable. They will have seekers that attempt to use their power to worldly ends, and there are forces that are employed at their hand that may seem worldlier than they, but to countenance the actual presence of an Outer God is likely more than a mortal mind could withstand.

In addition to the great-ones, elder gods, and other variants of deities that will be influencing the world of Revival; what kinds of "lesser" creatures and beings/minions might players witness working on behalf of those greater powers?

I expect that many of the enemies one will face will come from the ranks of humanity. Greed, and the quest for power can be pretty compelling, that aside, there will also be representatives of the gods that are more or less obvious in their manifestation. These could take the form of empowered cultists, or as the creations of a given power, such as Animae’s Fetchers, or human/Great-Old-One hybrids, akin to the creatures in Lovecraft’s tales. There could also be large specimens, such as a giant snake in a temple of Set, or large animal god in the deepest wilds.

These may or may not be divinely inspired, and some individuals might assume they are, when they actually are not.

Over the longer course of the game, there’s an almost endless range of possibilities, as we interpret our own Thelestonian versions of those monsters that we all want to see. We’re staying away from things like classic western dragons, wyverns and similar, opting instead for our own interpretations of monstrous beasts and strange creatures.

Even if we create a flying, scaled creature, it will be our own unique abomination. 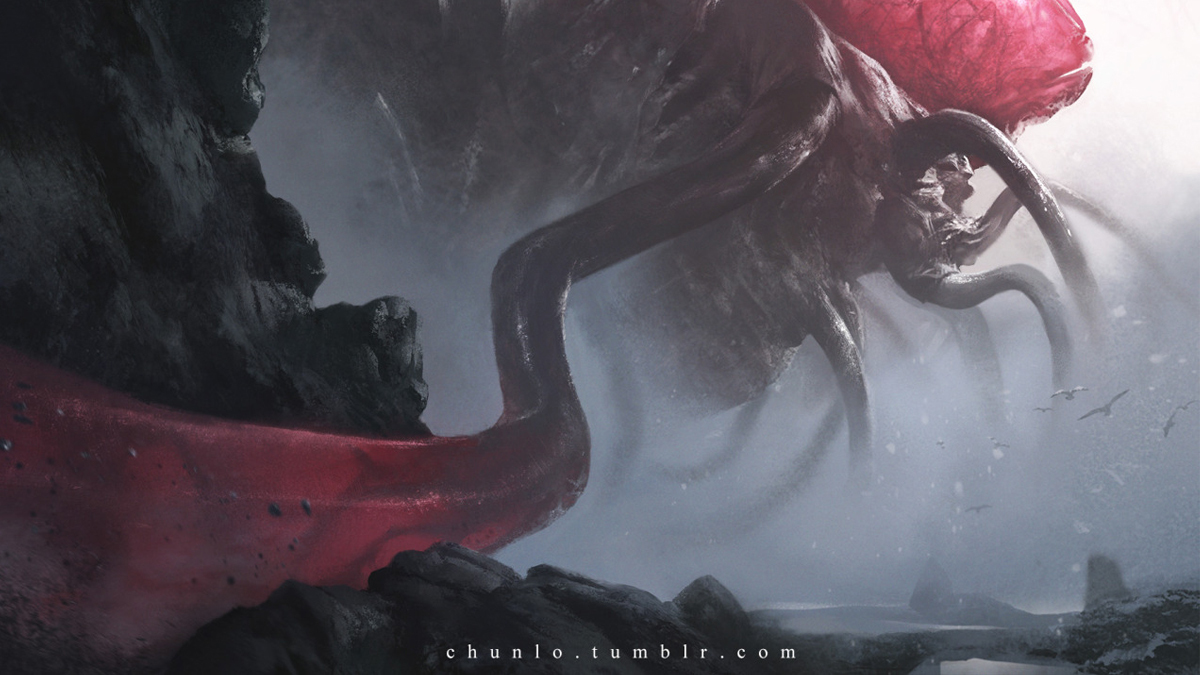 (Rendition of a "Great Old One", again by awesome artist Chun Lo - go check out his tumblr, if you want to see more.)

Can you talk at all about what types of events you're planning to have in Revival that might include influences, intervention, or direction action from any of the above beings/creatures?

While a whole lot of content and adventure can be inspired and achieved just within the economic systems of the game, the greater over-arching storylines running behind the scenes will most often be inspired by the agendas of the gods in tension with one another and in response to player endeavors.

This could be expressed as a quiet set of circumstances that aren’t readily obvious to those not paying attention; such as the existence of a cult that meets in a hidden cave once a month to worship, but otherwise isn’t obviously dedicated to Haedra.

If a player discovers the clues they could rout this cult, or try to join it. If they do the former, maybe a month of game-time later a plague of sea-toads begins (as the cultists didn’t perform the ritual to satiate the Great Old One), or perhaps a different cult takes their place, and another power begins to muscle into the void. Or, an envoy of mother Haedra could arrive to re-establish her cult. Perhaps even all three things happen, but each are separate, interacting events.

On Gold Servers, the gods will often be tools (or excuses) for the Storytelling Team to utilize while steering the plots of the world. This could take the form of the appearance of a divine envoy, a supernatural occurrence, or the endowment of players with a burden of terrible purpose. We can craft an event out of any set of circumstances that the game systems will support, so the potential space is pretty wide.

While the actual gods walking around and doing things all on their own is likely to be pretty rare, their agendas will influence many elements of the ongoing game world.

How will player's characters be affected by encounters with those foreign entities?  For a persistent, evolving world, there's got to be some lasting impact from such an experience, beyond right?

An old Cthulu Mythos cliché is that final scene in which one survivor of an encounter with the supernatural is left scarred for life, or even interred in a sanitarium. That said, a player character that meets a human-enough representation may not even know that they’ve interacted with a god. Of course, if that god was Great Cthulu or Mother Haedra, it could be rather obvious and would then likely have an effect on an unprepared character’s sanity.

If a character has interacted knowingly with a god or goddess, they will almost certainly receive "Tags" to that extent, though that may not be obvious to them at the first. It just means that elsewhere they will be potentially more likely to see the impact that a given power has had.

Now then, if special circumstances are met, and the character has sought contact with a power in order to extract some boon or to perform some service for that power, they could come away with more than just a "Tag" (though rest assured some tags will transfer.) Likewise, if one has run afoul of a god or goddess in such a way that said power sees fit to curse or otherwise mark that character, they will leave that encounter thusly touched.

Most other MMORPGs seem to only offer gear upgrades and arbitrary experience from encounters - to feed a slow and steady power-creep... but I've gotten the impression that Revival will do things differently with post-encounter rewards. Can you talk a bit about how the end-result of characters' actions might alter the in-game world or a character's individual story?

Well, to continue a bit on the previous topic:

The "Tags" that a character carries alter the content that they see, or - that they can affect. This can be something as simple as an interaction with some representative of Nodensthat revealing to you the secrets of working with the elements; or something more nuanced, like a meeting with a force of Beth-Khalor in which you are bound to her service and are granted boons to help complete the task – but only for as long as you serve well. If not, perhaps you will waste away, or suffer a debuff to your stats that food won’t cure like it used to.

For that matter, much of what can be gotten by way of this sort of interaction will be information itself, NyarLatHotep might reveal to you the location of a heretofore undiscovered island, or tell you where the fabled gem known as the Eye of Azathoth was lost. YogSothoth could teach you some lost Tongue of Madness that no one else speaks or reads. It could be that time spent in communication with particular powers is temporally taxing, so that each time a character calls up that power they lose a year of permanent lifespan, simply as cost of establishing the contact.

In short, the interactions that characters have with any power greater than humanity will leave marks that range from subtle to momentous. These abilities, gifts, marks, Tags, etc. will differentiate those that have brushed against these powers from those that haven’t, certainly. However, they won’t always be entirely positive either.

No choice is without some consequence.

[Stay tuned for final bit of this interview as we delve even further into Character life in Revival. For now you can go visit the game's official website and browse around a bit. There's plenty of information there to whet your appetite about what this game is shaping up to be. The Mission Statement and the Developer Blogs in particular are quite revelatory. Additionally, below you can find the latest episode of Revivalcast, where I and my fellow cohosts explore the latest information from the Developer Blogs, Founder's IRC, and other communication avenues.]