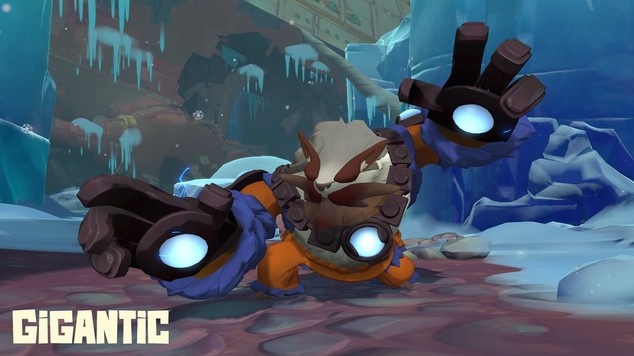 Gigantic: Final Thoughts
Is Gigantic worth your time? Here's our thoughts.

Upon Gigantic’s official release, I watched with interest the public and press reaction to it. The vast majority rightly heaped praise on the game. A beautiful art style, fast paced action, a unique game-mode in a genre that’s already brimming with competition, were all rightly pointed out. What was apparent however, was that many reviews were incredibly neutral when it came to pointing out flaws in Motiga’s design. I make no suggestion that flaws had to be found, but it does always lead me to raise an eyebrow when juggernauts such as Polygon gloss over the obvious.

I’ll freely admit that I love Gigantic, and unlike many of my peers, I’ve played it for a long time. As someone fortunate enough to have been invited to its now-defunct Core tester program over 18 months ago, I’ve witnessed the game go through significant change. Gigantic and its development studio, Motiga, haven’t had an easy ride: it has finally reached the finish line thanks largely to intervention from Perfect World. Was it worth the years of struggle? Yes and no.

Few could question the uniqueness of Gigantic. While there are similarities between it and other games in the MOBA genre (notably limited action sets, Heroes and upgrading your abilities), it plays drastically different to all its peers. The introduction of guardians, AI controlled beasts that act as your “core”, control the ebb and flow of battle. Securing kills, collecting Power orbs and destroying enemy Creatures all contribute towards your guardian gaining enough power to rampage across the map. Once it has, it will strike at the opposing team’s guardian, allowing your team to attack its heart, in order to cause a wound. Enough wounds against an enemy guardian result in the creature being killed, and you becoming the victor. 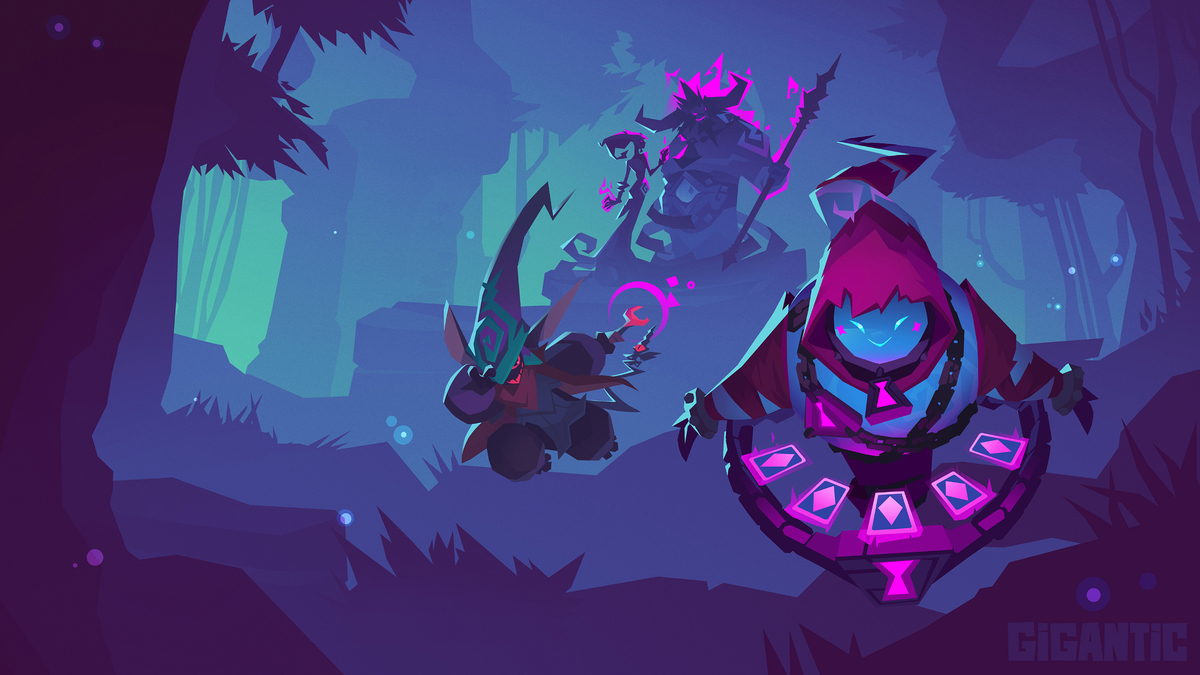 Gigantic has a beautiful aesthetic, with Oru demonstrating just how unique its Hero designs are.

It sounds a simple concept and yet the intricacies of securing wounds, or even just a rampage, eludes many players. While the tutorial does a reasonable job of informing players of the game’s basic mechanics, it fails to truly detail the depth behind such a system. Ensuring you don’t die, killing an enemy Creature after a failed wound, upgrading Creatures in order to secure more Power, or simply buying time to gain a next intake before your opponent, are subtleties to its design most seem entirely unaware of. While significant play time will expose you to such tactics, to not know them places your team at a significant disadvantage against one who does.

One of the biggest hurdles Gigantic faces, and I’m unsure if this issue is exacerbated by the emphasis on it being an arena brawler, is the fact that dying - and its direct contribution in powering the enemies guardian - is a very bad thing. Death in Gigantic and the inevitable consequence (an eventual rampage for the enemy team), will see your team lose quickly. Unfortunately, such a mechanic punishes teams who cannot control what their teammates do. Watching a match slip from your grasp because you have one team-mate who repeatedly dies (whether intentionally or not) is a variable you simply cannot control, and while there are moments where you and the rest of your team can attempt to carry, it’s an uphill struggle few can recover from. The “snowbally” nature of play, especially when you’re on the back foot after repeat rampages, can make Gigantic exhausting.

I’m not suggesting comebacks aren’t possible (they absolutely are, and I’ve had plenty), but there’s no doubting that the game has a combination of mechanics that make play in a random environment particularly stressful. Fundamentally, it draws from the fact that all its systems combined, alongside an incredibly fast pace, create a game that’s not particularly friendly for new players. Even those with some hours under their belt can still find themselves beaten into submission by experienced groups of players, with matches over in minutes once back-to-back rampages begin. 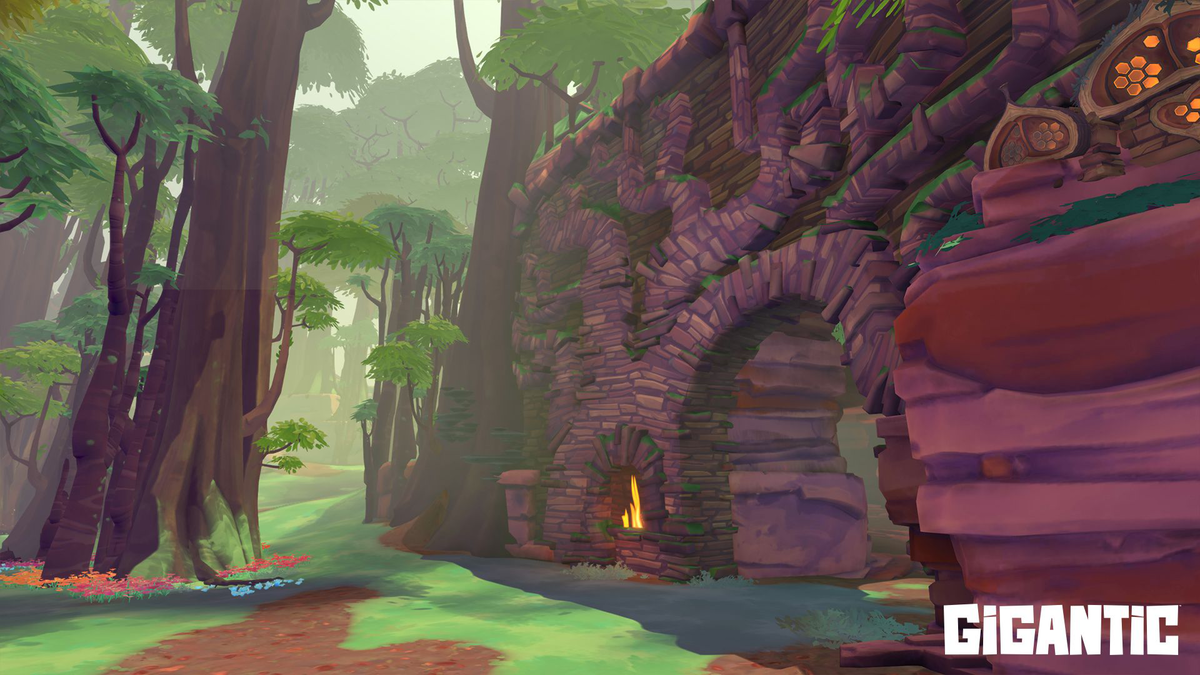 The new map, Wizard's Wood, looks as stunning as every other in the game.

You might consider these significant problems for the game, and while they are problematic, its steep learning curve is something I find incredibly appealing. Gigantic is a competitive game which doesn’t try to hold your hand, and which punishes poor play: it's rare to find such a game. Unfortunately for Motiga, it likely means that long-term retention is potential an issue. When players feel they aren’t in control of a match or their own progress, they’ll inevitably become frustrated and move on. With only three maps, no ranked mode, no seasons and no additional game modes, Gigantic is entirely reliant on players being hooked on what they’re given, rather than what could be. While I have no issue with this (the game has kept me engrossed all these years already), I can imagine many will grow tired quickly, especially when combined with the frantic pace and unique mechanics.

It would be a real shame for Gigantic to not gain traction, because Motiga have dared to be different and created something that’s not only a great deal of fun, but also incredibly exciting. Those frantic moments when both teams are vying for Power, with the next kill or Creature capture ensuring a potentially winning rampage are adrenaline fuelled. Gigantic might be rough around the edges, but it also offers a great deal. Hero balance, tutorials and match-making can all be tweaked: the foundations for something extraordinary are all here. Unfortunately for the studio and with the genre already filled with exceptional titles, pulling people from their go-to games, and keeping them playing Gigantic, will be an entirely different challenge.

The release of three stunning new Hero so soon after launch, alongside a new map, shows Motiga are making every effort to not only keep its players entertained, but demonstrate they’ve plenty up their sleeve. If they can continue in this vein, polish where neccesary and place all their resources into delivering a ranked mode as soon as possible, there’s every chance Gigantic could muscle in on the competition. For now, I’m keeping everything crossed and if nothing else, I'd recommend you go and play it to appreciate just how good every single Hero is, with most, if not all, putting the competition to shame.

Gigantic is available now and is free-to-play on Steam and Arc.