EVE Valkyrie: Hands-on Time With the Latest Demo
Dalmarus gets down and dirty with EVE Valkyrie and the HD Oculus Rift
Preview
EVE Valkyrie 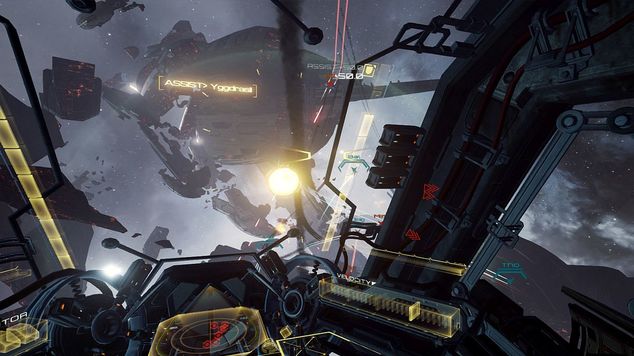 Hands-On with EVE Valkyrie at EVE Vegas 2015
We got our hands on a preview build of EVE Valkyrie, CCP's upcoming VR spaceship dogfighter, and have some opin

At EVE Vegas I was able to get some hands-on experience with EVE Valkyrie and I must say, I have walked away insanely impressed. There isn’t really a way to explain my excitement and enthusiasm without sounding like a shill, because I have nearly nothing negative to say about my experience with the game, beyond just telling it like I seen it.

You play a capsuleer, I think, who flys a spaceship. In the retail launch, you’ll fight against other players, but in the mode I played, I fought against the various AI bots, which was much like playing shoot the bottle, except better since it’s in space and really fun.

First, the fidelity is absolutely gorgeous. As you’re flying around in space, not only are the physics top notch, but everything is so well drawn, rendered, and just presented straight to your eyes. The interior of the ship has details everywhere and you can look around the ship and see nails, scuff marks, and other small details. The ship is completely rendered 360 degrees, so you can look directly behind, above, and below you. The only nitpick is the human model inside felt a bit, odd, I suppose, but it also I believe moved along with you, which is very nice. Everyone I spoke with was blown away by the detail in the cockpit, which is really important in VR games as details help make you more immersed.

The GUI is initiative, smooth, and useful. Flying in what I believe was a Wraith, it was very easy for me to unload missiles, fire my guns, steer, and monitor the surrounding battlefield. The monitoring the surrounding battlefield mechanic is important, because you can easily see anywhere and everywhere around the ship by moving your head. So it’s rather easy to lock on to someone, fire at them, and look around for your next target.

Combat was fast and addictive. I played the demo twice, and regret not begging to go through again and again. You basically launch and feel as if you’re in the ship. You don’t have very long to think before you’re having to fight it out against the enemy, focusing on finding nearby targets and fighting it out. The immersion helps a lot, because there isn’t much to distract you.

The head tracking had no latency in the setup I played on. Mind you, this was on an Alienware that I assume had some beefy specs, but the Oculus camera was in front of you (the mocap tracking device thing) which I assume helped. I spun my head around so much trying to get motion sick and wasn't able to, looking up, down, left, right and shaking my head, it tracked it along with it.

That’s about all there is to report about the mechanics. It is still an alpha/beta build, but that wasn’t the interesting part with only about five minutes of gameplay. For some reason, the part that was so good was just, everything, and I really didn’t find anything that didn’t make me want to keep playing it.

The hardest part for me is to describe the fun. I’m not sure how to describe how much fun I had during my experience. It was just a raw, insane, desire for more. With the headset on, with the perfect head tracking (not even near perfect, literally perfect, I spent a solid minute trying to bug it out shaking my head around), and satisfying combat, I felt completely immersed and excited. This craving that I can’t kick. I want to honestly say that I’m actually in near tears, sitting at home, unable to play more. I would consider myself almost absolutely addicted to the gameplay, wanting nothing more to slide the Oculus on my head.

Sometimes you can't figure out why something was so fun and put it properly into words and I think this is the case. I didn't have enough to break down everything that was amazing with it, but at the same time, I really want to have that additional time with the game to be able to figure out my feelings. The immersion, I think, is one of the biggest factors of the experience.

I could be wrong, maybe my limited experience has poisoned the well, but I would say that if you’re anywhere near a fan of VR, please have this on your radar and see me the second it launches, because I’m going to be there.

EVE Valkyrie will likely be a launch title for the Oculus Rift consumer edition, launching sometime likely in Q1 or Q2 2016, and also Playstation VR, which will launch I assume when it wants to. Pricing and other details are not available. I wasn’t able to try any of the features in the game, like alternate ships, the skill trees, etc. and just the raw gameplay. Experience can and will likely change when the game launches, but I hope to whatever is appropriate to the EVE universe that it doesn’t change much.

To read the latest guides, news, and features you can visit our EVE Valkyrie Game Page.

EVE Valkyrie: Hands-on Time With the Latest Demo
Dalmarus gets down and dirty with EVE Valkyrie and the HD Oculus Rift