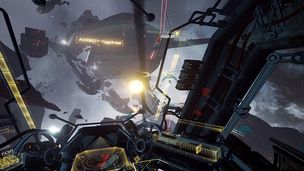 Hands-On with EVE Valkyrie at EVE Vegas 2015
We got our hands on a preview build of EVE Valkyrie, CCP's upcoming VR spaceship dogfighter, and have some opin
Preview
EVE Valkyrie

EVE Valkyrie: Hands-on Time With the Latest Demo
Dalmarus gets down and dirty with EVE Valkyrie and the HD Oculus Rift

Ever
since I tried out a virtual reality mega monstrosity
of a system in my local mall 20 years ago or so, I’ve
desperately wished some
company would be able to bring a viable virtual reality system to the
masses.
The Oculus Rift has been getting a lot of interest from developers and
gamers
alike, but a peripheral isn’t going to become a household
name without an
awesome game behind it. Enter EVE
Valkyrie.

Now
to be clear, CCP has not said they are officially
endorsing the Oculus Rift. For now, it’s just being used to
develop and
demonstrate EVE Valkyrie. I had a chance to try out the tech demo of
Valkyrie
(when it little more than a side project by some developers called style="">EVE-VR)
at E3 this year on the old
Oculus Rift. It was awesome then (you can href="http://www.tentonhammer.com/events/e3/2013/eve/eve-vr-virtual-reality-project">read
my thoughts on that experience here)
and it’s even better now. For those
that may not be familiar with EVE
Valkyrie, it’s the
third game to be introduced to the EVE universe, joining
EVE Online
and DUST 514.
Currently in development, it’s expected to be released
sometime in 2014.

style="">EVE Valkyrie
has seen some drastic improvements over the previous tech demo.
That’s not
unexpected in and of itself, but the level of improvements to an
already
incredibly fun game are. First up, the obvious – the graphics
are clearer,
there’s far more variety in color, and the level of detail on
individual ships
and background settings have all been vastly improved. The gameplay is
still as
fast and furious as it was before, but there have been a number of
improvements
made to the UI in order to provide players with more information about
their
surroundings.

In
the previous tech demo, the only indication you had of
an incoming missile from an enemy craft was an impending sound of doom
through
your headphones. EVE
Valkyrie now
sports a proximity radar system that’s viewed by just
glancing down. Floating
in the air in front of your virtual legs, you’ll see an image
of your ship.
When an incoming threat is detected, a line will appear giving you the
direction that threat is coming in from. By use of this line system, it
also
allows you to judge the distance between you and the incoming missile.
As the
missile gets closer, the image begins to zoom in. Since style="">EVE Valkyrie
is a virtual reality game with 3D elements, the
proximity radar also shows you whether the missile is coming from above
or
below. All of this adds up to loads of new information at each pilots
fingertips that can be absorbed and acted on in less than a second.

There
have been some improvements made to missile locks
as well. I’ll admit they caught me off guard because I was
happy with the
previous system and quite frankly didn’t think it could be
improved upon.
Compared to the tech demo, the missile lock system of style="">EVE Valkyrie
feels as though it has a slight delay in choosing a
target, and a slightly longer lock-on time. Despite the way that
sentence may
sound, I can assure you that I view both of these as improvements and
not
complaints. If two enemy ships are flying in close proximity to each
other, the
initial targeting delay makes it easier to get a lock on the target you
were
going for. Sometimes in the demo, you’d pull your trigger to
initiate a lock
and get the wrong ship. The slightly longer lock-on timer just adds to
the fun
and rewards pilot skill by taking longer to get a lock.

This
is all well and good, but for now, EVE Valkyrie is
still a succession of quick battles. David Reid, CCP’s Chief
Marketing Officer,
quickly acknowledged this when I asked him about it. The team
recognizes that
it still has a long way to go before the game is ready for public
release. It
still needs to be tied directly into the EVE universe as well as adding
more to
make it a full game, rather than just a match lobby. After seeing how
much EVE
Valkyrie has improved in the
short
months it had been since I played the tech demo though, I have little
doubt
they’ll manage to do just that.

As
a side note for those curious, once again, I had no indication
of motion sickness, even when whipping my head around to keep a lock on
a fast
moving target. I’m also one of those poor bastards that
can’t go to 3D movies.
I’ve tried multiple times and I either had to live with a
splitting headache
and eye strain to see the effects, or tilt the glasses to extreme
angles in
order to see the film. Doing so cancels the 3D effect though.
I’m happy to
report that I haven’t had any trouble getting the 3D effect
with the Oculus
Rift (Low res and HD versions) and have had no eyestrain or headaches
either.

I’ll
sign off by saying if there was ever any
game you have to try when it’s at your next gaming
convention, it has to be EVE
Valkyrie. I don’t care
if you hate
space games, hate video games in general, or just think
you’re too cool for
school. The game is instantly accessible to every person out there,
though I
have no doubt it will take a lot of work to master. And those, my
friends, are
the best kind of games out there.

To read the latest guides, news, and features you can visit our EVE Valkyrie Game Page.

Hands-On with EVE Valkyrie at EVE Vegas 2015
We got our hands on a preview build of EVE Valkyrie, CCP's upcoming VR spaceship dogfighter, and have some opin