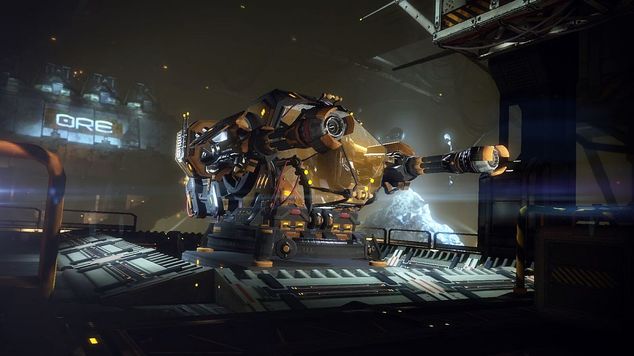 Gunjack is a new mobile VR game from CCP, creators of EVE Online, in which you play a “gunjack” a Human that basically doesn’t get to respawn in the world of EVE Online. They man various turrets and are considered disposable. As such, your goal (if you should so accept it), is to defend the structure (I think it was a structure, I so could be wrong) from the incoming waves of enemies using a stationary turret.

It’s a virtual reality title that is exclusive to the Samsung Gear VR. Utilizing the controls on the headset itself, you press and hold to fire automatically, tap to fire, swipe forward to use a buff, and swipe back to reload. The Samsung Gear VR utilizes various compatible Samsung phones to operate itself.

It plays a lot in the style of Galaga / Space Invaders, as waves and waves of enemies fly onto the screen in various formations and you blast them. In the level that I played, it was split into two sections, the first involved ships launching at you and you need to blast them, followed by a segment where a ship flew in front of you and you had to blast these lasers that were charging.

Powerups showed up, including various weapon upgrades in the first part, and armor in the second part. The armor was so that you could have some defense to reload, as the laser blasts were intense and constantly coming. You get three continues per level and are scored based on accuracy and use of continues.

For the gameplay, it was fun and I enjoyed it. As a mobile game, I would definitely say it’s a top tier game, you probably won’t see other games with as much fidelity, especially on a mobile. The mechanics were solid and gameplay was really well done. Unlike the Oculus, the Gear VR uses only the phone, so it isn’t hooked to a PC or anything similar to that, however, the experience was rather good.

The head tracking worked well, I never was very frustrated with trying to aim (you look to aim). The button on the side I had a lot of issues with. Reloading often didn’t happen, or I would accidentally use a power-up, and certain weapons had a major disadvantage that after you got it and it was used, there was a reloading animation that had to play which allowed you to take damage. I think those are the kind of kinks that’ll be worked out, but I hope it’s compatible with the Samsung controller that’ll be an accessory for the Gear VR.

I had a positive experience with it, as a game it performed its duty of keeping me excited and enjoying it, but there were a few of those frustrating moments with the controls, but much fewer than I was expecting when I was sitting down to play a mobile VR title.

Gunjack has a lot of promise and if you’re a Samsung S6 or Note 4 owner, then I would keep this title on your radar. Pricing details haven’t been released, nor is there a confirmed launch date. It likely will be a launch title for the consumer edition of the Samsung Gear VR.