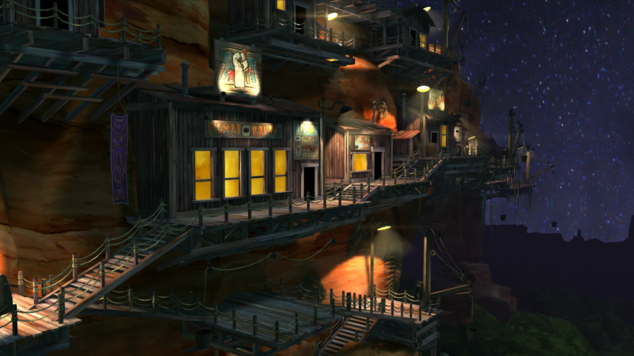 The Labs may be Undead, but that doesn’t mean the studio is all zombies, all the time. That was one of the more impactful revelations discovered during our recent time spent at Undead Labs’ downtown Seattle studio. While we were pretty stoked to learn the first details about the State of Decay: Year-One Survival Edition coming out on Xbox One and PC (via Steam), we also got to battle like galactic stars for a couple of ours in Moonrise.

First and foremost, you should know that Moonrise is very much a mobile deal. While 99.9% of the mobile market falls too far out in left field for us to regularly cover as a core MMO or RPG outlet, Moonrise is one of those rare exceptions that we feel will cater quite well to that core MMOG audience.

If you’re unfamiliar with the game, here is a little recipe I whipped up that should help give your brain a taste of what Moonrise is all about through the eyes of a core MMO gamer.

The first two points of reference are probably quite familiar with most gamers given that Pokémon and Final Fantasy are globally recognized brands. The third ingredient, Polymock, is a collectable creature battling game added to the original Guild Wars circa the Eye of the North expansion. Given that there are more than a few ArenaNet veterans walking the halls at Undead Labs it seems only natural to me that a mini-game like Polymock might filter into a title with similar gameplay like Moonrise.

While I’d say the game absolutely has some distinct and obvious heritage from the titles mentioned above, Moonrise is – at the same time – attempting to offer something wholly new to mobile gamers. 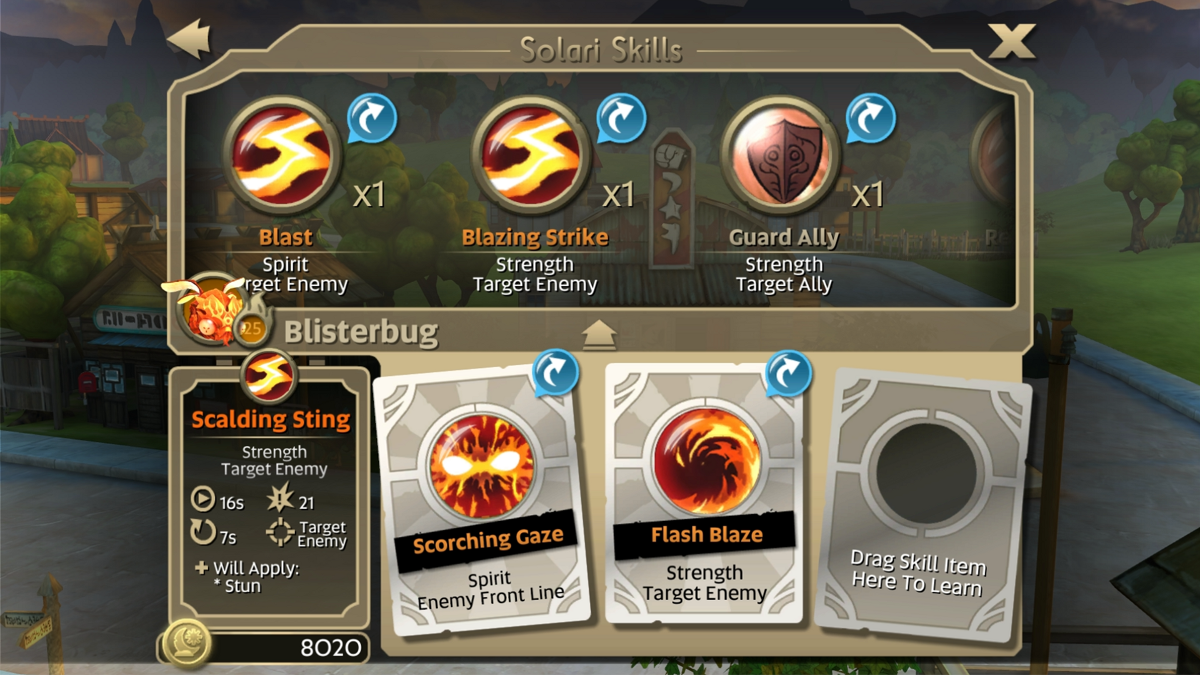 Similar to characters you’d play in MMOGs, your collected creatures – known as Solari - will grow in power and either unlock or improve at using a variety of skills. Likewise, your Warden (character) will continue to evolve and improve over time, and is an active participant during combat. The key area where I’ve found Moonrise differs from Polymock is that there are no (obvious) interrupts, at least none that are more reactionary or twitch-based.  The thing is, Moonrise isn’t necessarily turn-based either, but instead sits somewhere between those two planes of existence.

Of course you can’t have a pet battling game without having a strong PvP system in place. Well, you could, but I would suspect that after a while it would get a bit stale to simply fight against AI all of the time.

After getting a feel for the core gameplay and mechanics for maybe 20-30 minutes, a number of us at the studio began to queue up for some PvP matches. Apparently I royally suck at pet battle systems (I’ve never been much of a fan of JRPGs either, for that matter) because I never did win a single match. It was still fun, but made me want to sit the iPad down, and then spend the next hour reading the skill description text, mentally cataloging cooldown times, and contemplating strong counters. 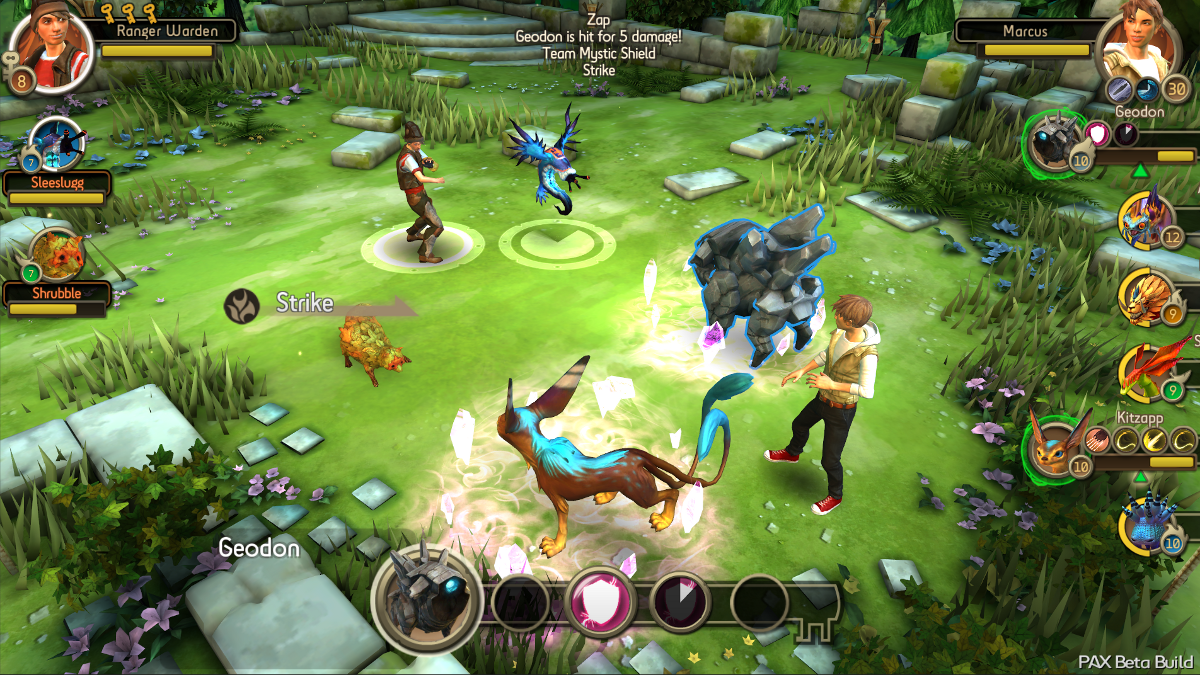 Instead, I simply bumbled through each match – one defeat so humiliating that Skylatron actually managed a flawless victory against me. Eventually I did pick up some of the basics and could even see how Undead Labs is attempting to make the game more than just a very one-dimensional pet battle sim.

It’s possibly worth mentioning that I’m also in no way whatsoever a mobile gamer. I own Windows mobile devices, so naturally I don’t game on them because no one is ballsy enough to help make the marketplace better.

For a moment I did have a flicker of hope that Undead Labs would be awesome enough to be bringing Moonrise to the Windows mobile marketplace. When I asked directly if there’s a snowball’s chance in hell of it happening, I got the stock answer that ever mobile developer gives. “Blah, blah, market saturation, blah, blah metrics, blah, blah, maybe in the future blah, blah, blah”.

(I’m pretty sure a copy of that dialog comes bundled with each and every software development kit for Android and Apple devices.)

In this case, I would have thought there was a higher than zero percent chance of Moonrise hitting at least one Microsoft device, given how much they’ve partnered up for all things State of Decay – a relationship that by all accounts will continue long into the future.

Getting back to the subject at hand, overall I would say that Moonrise has been a lot of fun, and I could definitely see how it will appeal to a fairly broad spectrum of gamers. On the surface, it has that whole “easy to learn, difficult to master” thing going for it, and I also don’t think it’s by any accident that many of the folks I talked to at Undead Labs were more prone to name dropping Hearthstone as an inspiration than any other existing game.

All told, Moonrise gets a big blue thumbs up from me, and scores a solid 8.3 on the Sarduometer. I’ll be pestering Skylatron to weigh in on the game from her perspective later this week, so be on the lookout for that.

To read the latest guides, news, and features you can visit our Moonrise Game Page.