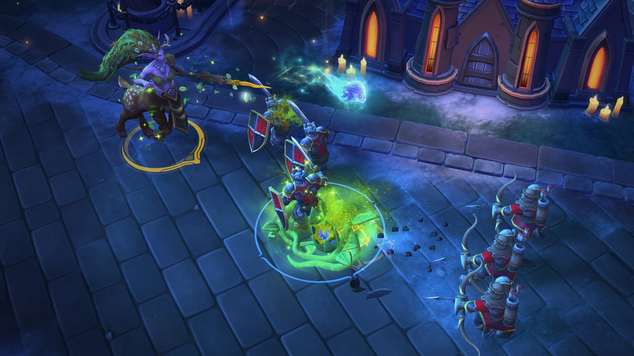 Heroes of the Storm: Best 5 Heroes To Carry You To Grandmaster
If you're wanting to climb the ladder in Hero League, you might want to learn these five Heroes.

I regularly get asked how to reach Grandmaster Rank in Heroes of the Storm and while there’s no guaranteed method, it’s all about minimizing the risks you take. Avoiding Heroes that are out of the meta, acknowledging that you can’t control other players and their faults, while making sensible engagements can go a long way. A large part of climbing the Heroes of the Storm ladder is also choosing a set of Heroes that you’re comfortable with and while they might not necessarily be at the cutting edge of win-rates, if played properly they can carry you and your team to victory. Below are a list of five that with practice, can often win matches irrespective of who they’re paired with. Mastering these can - at the very least - get you all the way to Grandmaster.

Without doubt the best support hero in the game by some margin, Lucio is a must-have. His AOE healing, movement speed boost, knockback and wallride make him an absolute nightmare to deal with. If you then combine this with his shielding from his Heroic ability, there's very little he can't do well. The fact Lucio is easy to play and hard to play badly, make him even easier to carry a team with. Although he's still at risk from crowd control and being focused, as long as you remain at the back of a team fight, while regularly switching your songs, you shouldn't have any trouble carrying your team.

Before he hits level 10, Varian isn't anything eceptional. However, once he obtains Colossus Smash or Twin Blades of Fury, combined with his level 4 talent, Warbringer, he's like The Butcher on steroids. Able to charge and slow every 6 seconds, for 1 second, he's a menace who's incredibly sticky. Combined with his rapid attacks from Fury, or huge burst from Colossus Smash, he can comfortably solo most Heroes and lock down key targets with ease. When you also add in the sustain he has when pursuing a Fury build (taking Second Wind and Banner of the Ironforge) he can solo any camp and any boss in a matter of seconds. While Varian can be locked down fairly easily, he can also snowball once he gains a level lead. Once he reaches 16, he only gets stronger as he not only reduces healing against a target by 40% (Mortal Strike) but can also destroy shields: Zarya, Tassadar and Artanis don't stand a chance.

Nazeebo has been able to carry a team fairly hard in recent months. His Corpse Spiders are amazing at pressuring any team and the fact uncoordinated teams will often group up ensures he can deal massive damage very quickly. His Zombie Walls are excellent for area denial, his Ravenous Spirit fantastic for dealing high damage and with the right talents, he also has lots of sustain. Although Nazeebo requires a fair amount of skill to play well (especially in order to land your Zombie Walls) he's also fairly forgiving. Corpse Spiders are easy to aim, Ravenous Spirit and Gargantuan are impossible to miss with and even Plague Toads are fire and forget. Despite his accessibility, he sits on a 53% win rate right now which is the highest of any specialist.

Jaina has always been strong but her ability to carry a team is fairly strong right now. Her burst is incredible, her Ring of Frost still a must-have talent for a group-wide wipe and her Blizzard more than capable of clearing waves or mopping up low health heroes. She still relies heavily on positioning and having a reasonably solo composition around her. However, in the right hands and if she arrives a little late to a team fight she can often clean up. With the right talents not only can she withstand some punishment but she's also good at poking enemy players and generally being a nuisance with her trait. If you can master Ring of Frost and when to cast it, you'll have no problem reaching Diamond and onto Grand Master.

He might not be as strong as some melee assassins in our Tier List right now, but Illidan in the hands of a skilled player can carry any team. Playing him effectively usually sees you on a knife-edge. You have to push his play and health to the fringes by constantly harassing the enemy - sometimes over-extending when necessary. However, Illidan is a high risk, high reward Hero. You can tunnel enemy players like no one else and if supported by a healer, there’s few Heroes that you can’t kill quickly. The only advice I can give when it comes to Illidan, is play aggressively but don’t go in first and most importantly, take him to Quick Match. There’s no better place to practice how far you can push him. If you can, try to convince your team to draft around you - you'll reap the rewards.