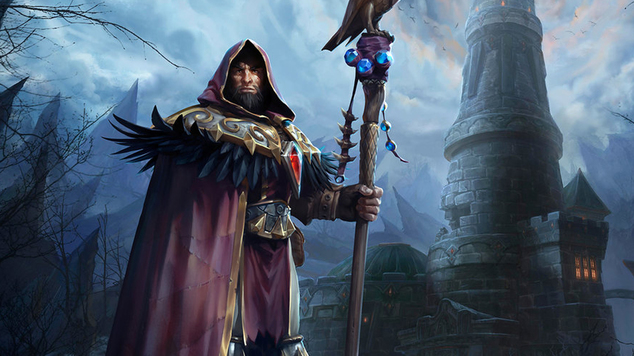 Our ever popular Heroes of the Storm Tier List ranks each Hero in a Tier that we consider to be "the best" and while we have descriptions next to each detailing why they're there, its detail is intentionally limited: we want you to be able to quickly view the list and see where Heroes are placed. This article will, upon every change to our Tier List, reflect the best 5 specialists in Heroes of the Storm.

Azmodan currently has one of the highest win rates out of any Specialist. Having recently been reworked, he remains strong and the fact Battlegrounds are getting bigger plays to his strength. His ability to split-push with his Trait allows him to pressure all lanes globally. His Globe of Annihilation also means that he can deal enormous team damage from a significant distance, allowing him to burst an entire group of players. While Azmodan is a fairly easy target, his 1 on 1 potential is good if he pursues All Shall Burn, while he can blitz down bosses and static Objectives due to his rapid damage over time. On large Battlegrounds Azmodan can pressure any team with easy and most instances, carry them to victory just for being so oppressive.

Sylvanas is, without question, an exceptional Specialist. She has one of the most powerful traits in the game that allows her to disable any structure or minion, permanently, as long as she hits them with her basic attack. This puts her in a position where she can comfortably solo a Fort and its Towers without the need for a minion wave. Unsurprisingly this makes her devilishly good at split-pushing but it has also given rise to a tactic of five-man rushing one point on the map. Although said tactic is fairly easy to counter (players tend to wait until Sylvanas shows herself in a lane before moving to it) it can often result in the enemy being put under immediate pressure, and see them lose lane experience.

On Battlegrounds that have AI objectives, such as Battlefield of Eternity or Infernal Shrines, her ability to disable structures places her at the forefront of drafting. It not only allows the objectives to push, but significantly reduces incoming damage from Forts and Towers. The result, inevitably, is a far more powerful push that opposing teams can struggle to deal with. While Sylvanas might be the queen of push, she's also more than capable of dealing high damage in a team fight against enemy Heroes. Her Shadow Dagger, capable of applying team wide damage over time, combined with her ranged silence (Heoric) and fast-firing Withering Fire make her a nuisance. It also helps she has an amazing escape in Haunting Wave.

Zagara isn't a mandatory Specialist, but she is good on large Battlegrounds that allow her to split-push. Haunted Mines and Infernal Shrines allow her to push lanes incredibly well, as the opposing team are distracted by securing an objective. If she makes effective use of Nydalus Network she'll not only be able to pressure lanes, but also join team fights once a lane is pushed. This provides Zagara with amazing Battleground presence that allows her to roam, soak and secure team-fight kills. If she uses her Banelings effectively, to bombard the enemy team and repeatedly soften them up - alongside her Infested Drop - she'll deal significant damage.

There's no mistaking Medivh is a pain in the arse to deal with, and in the right hands, can be unstoppable. His ability to mitigate incoming damage, provide constant vision, and teleport players in and out of combat is a huge headache. Combine this with powerful Heroics, bags full of damage (once he completes his quest) and you've an amazing Hero. With enough practice, Medivh can be a thorn in any teams side, and is more than capable of hard-carrying them to victory. Just be sure to hit Quick Match to practice him before you jump to Ranked. A bad Medivh is a liability.

Right now Nazeebo is my most played Hero: I've always loved him. It's fair to say however that he's been awful for some time. He has begun to rise in popularity however, especially now that people pursue a spider-based talent build. Although he offers little burst outside of his Toads, and his Zombie Wall is still hit and miss, he's incredibly strong. His Corpse Spiders are capable of dealing amazing damage and the poke potential of them (when talented and with reduced cooldowns) makes him a frightening Specialist by the time he hits level 13. Combined with his Heroic, Ravenous Spirit, he can absolutely destroy enemy teams if left unchecked. If you also factor in his Zombie Wall acting as a body-blocking tool, alongside his Toads for wide area pressure, there's little wonder he continues to shine.