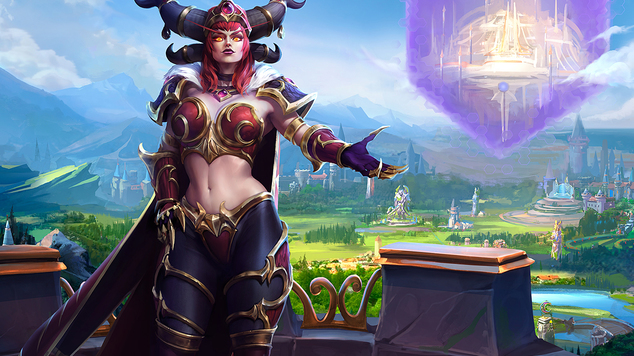 Our ever popular Heroes of the Storm Tier List  ranks each Hero in a Tier that we consider to be "the best" and while we have descriptions next to each detailing why they're there, its detail is intentionally limited: we want you to be able to quickly view the list and see where Heroes are placed. This article will, upon every change to our Tier List, reflect the best 5 supports in Heroes of the Storm.

To keep our ship afloat, Ten Ton Hammer often uses advertised links within our content. This article contains such a link. Thanks for your support and understanding!

Alexstrasza is undoubtedly one of the strongest Support Heroes in Heroes of the Storm. Not only does she have excellent utility in Flame Buffet, but she'll allow you to play at the best casino online. Better still, her Trait alone can carry most teams to victory thanks to the abundance of healing she brings in dragon form. Combined with a powerful knock-back, and her aerial bombardment in Cleansing Flame, she can be invaluable to her team. While she's weak to dive compositions (not unlike Ana), with the right positioning and management of her Trait she can comfortably solo heal, and survive significant pressure. In the right hands, Alexstrasza is exceptionally strong and vying for an S Tier placement.

With the greatest area control of any Support Hero, Deckard is incredibly difficult to deal with. His constant supply of potions, combined with his root and slow ensures he can excel at area denial. Combine this with Stay Awhile and Listen, and he can shut down an entire enemy team. What's also particularly frustrating about Deckard is that his armor bonus, combined with reduced cooldowns when near his team, mean that he's surprisingly challenging to kill. Reaching him, and bursting him down, can prove difficult if he positions himself well.

The king of Supports doesn't seem to be showing any signs of slowing down. His hard crowd-control in Entangling Roots, combined with his masses of sustain ensures he's a mandatory pick in most compositions. Add to this a powerful AOE silence in Twilight Dream, and Ice Block to defend himself, he's frustrating to shut down. What's also amazing about Malfurion is the fact he provides a constant stream of mana to casters, ensuring Jaina, Kael'thas or anyone inbetween always has amazing amounts of sustain.

Rehgar has had a mixed time as a support Hero. Buffed, nerfed, buffed again. He has however found himself on the receiving end of some particularly nice improvements in recent patches, notably to the much loathed Bloodlust. Not only does Rehgar now bring with him a valuable heal and slow, but he's also more than capable of dealing respectable melee damage when also combined with his Storm Shield. What's particularly interesting about the improvements to Rehgar is that he can now be played aggressively and if you do pickup Bloodlust, there's still the damage component alongside its healing. If you also consider his mobility from Ghost Wolf and the 90% slow he gains on his Earth Totem at later talents, there's little wonder he's now regularly picked.

Stukov is undeniably strong. His healing over time is high, his slow invaluable and his Silence oppressive. While Stukov relies heavily on later level Talents and his Trait in order to maximize his healing potential, he still excels as a solo Support. As long as he positions himself correctly, not only can he sustain a team with ease, but he can also deal a reasonable amount of damage. Both his Heroic abilities provide tons of protection for him and his team, while Weighted Pustule, if placed correctly, can gaurentee kills. Although Stukov requires a skilled player, there's no mistaking his value.