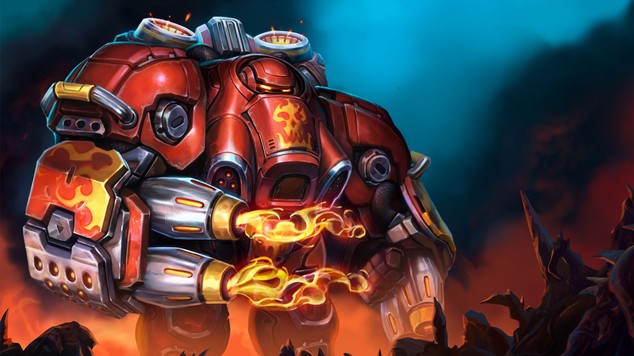 Our ever popular Heroes of the Storm Tier List  ranks each Hero in a Tier that we consider to be "the best" and while we have descriptions next to each detailing why they're there, its detail is intentionally limited: we want you to be able to quickly view the list and see where Heroes are placed. This article will, upon every change to our Tier List, reflect the best 5 warriors in Heroes of the Storm.

Blaze is without doubt one of the strongest Warriors in Heroes of the Storm. His kit is filled to the brim with utility and diversity. He's exceptional at solo laning, his damage is high, he has bags of self-sustain if he lands his Oil Spill, and his Trait is fantastic. While he lacks the mobility of Sonya or the hard crowd control of Arthas, he makes up for this with Jer Propulsion and the slow Oil Spill provides. His Bunker Drop is exceptional, while his ability to zone the enemy team - for a Warrior - is unrivalled.

With amazing mobility and a double-dose of crowd control, E.T.C still proves to be a very reliable and powerful off-tank. His self-sustain is solid, Mosh Pit remains a game-changer, and Powerslide can get him out of most sticky situations. Although he can be focused easily without his abilities, in the right hands E.T.C proves difficult to bring down and a Hero that can disrupt the enemy team with ease.

Irrespective of what position you are in Ranked, Garrosh remains a threat. In lower leagues he can carry any team, simply because players fail to avoid his stun and throw. In higher ranked play, his kit is still powerful thanks to an early Unstoppable Talent, high health pool, mitigation in his Trait and a very frustrating taunt. If you also factor in his self-sustain through his Bloodthirst, he's incredibly tough to bring down. In the right composition, Garrosh can hard-carry, especially if he snowballs early game.

Johanna is very much back in the meta. Her blind, combined with massive shielding from her Trait, ensures she can limit the opposition damage, while also surviving for long periods of time. Johanna is one of the few Warriors, like Muradin,

Sonya has been up and down our tier list over the last year. Although she's still somewhat slow (and predictable), her stun remains viable and both her Heroics are effective. What makes her so strong however, especially after her rework, is the fact her sustain is unrivalled. Her Whirlwind provides enormous amounts of health return and allows her to dive deep and still make it out alive. She isn't great as a solo Warrior, but as off-tank she's fantastic. Capable of quickly taking camps, soloing bosses and farming lanes, Sonya is also exceptional at taking on any other hero 1 on 1.

The queen of solo lane, Yrel is an absolute monster on Braxis Holdout or Dragonshire. The only Hero who's capable of dealing with her is Malthael, and even then she can eat him for breakfast if she repeatedly lands her leap. With the right build, her sustain is ridiculous and at 16, her damage spikes massively. Both her Heroics provide even greater survivability, while her leap > knockback can displace squishy Heroes instantly. Although she's weak to repeated CC, if she's maintaining solo lane few can stop her.