Runescape May Behind the Scenes
<p><strong>Peak out into the Runescape!</strong></p>
Article
RuneScape 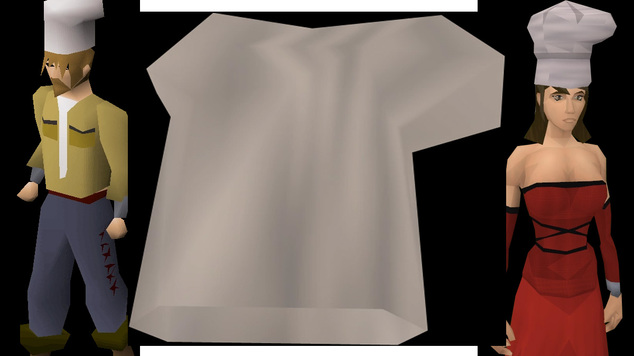 How Do You Get a Chef's Hat?
A chef's hat in Runescape allows players who meet the required level of cooking to enter the Cook's guild.

How Do You Get a Chef's Hat?

A chef's hat in Runescape allows players who meet the required level of cooking to enter the Cook's guild. That is its primary purpose and goal. After that, there's not much use to a chef's hat. It has absolutely no defensive capabilities and does not boost any of your character's stats. The only other value it probably has is roleplaying. For example, playing as a kooky alchemist that is also a chef, or something like that.

At any rate, here's how to get a Chef's Hat in Runescape.

There are three ways to get this hat in Runescape. The first and easiest way is to buy it. Two stores sell it. One is near the windmills somewhat north of Lumbridge. Follow the path that goes north (and a little west) of the town and buy one from Beefy Bill's supply store. It should cost two gold pieces. The most convenient time to get one is while collecting ingredients for a redberry pie for the Knight's Sword. Bill's shop stock all the ingredients except wheat, which can be harvested in a field nearby.

The other shop is the Fancy Clothes Store located in the south-eastern portion of Varrock. The shop sells needles and thread among other clothing as well as hunting gear. Same as Beefy Bill's supply store, the Chef's Hat here also costs two gold coins. Drop by and buy one when you're in the area.

The second way is to hunt creatures that drop it. Goblins (and other variants, specifically Goblin guards on the observatory and Cave Goblins) drop chef's hats. The first two drop it commonly, while the last drops it rarely. Imps and Imp Heralds also drop this hat, also infrequently though. Lastly, Pirates will drop it occasionally. The Goblins are very common and easy to farm. It's recommended to farm while leveling combat skills.

The third is simple, with at least level 67 of Construction, you can build the Teak Shelves 2 in your house. These shelves will give an unlimited number of kettles, teapots, porcelain cups, beer glasses, bowls, pie dishes, empty pots, and most importantly, chef's hats. The shelves require 3 teak planks, 6 soft clay, and 2 gold leaves to build. It also can only be built in a shelf hotspot in a player's home.

Of course, it can be bought on the Grand Exchange as well. Prices fluctuate, but the current average seems to be around 300 Runescape gold coins (as of the time of writing). It might be the easiest and most convenient way, though quite expensive. Compared to the price at which shops are selling it, 300 gold seems to be too much. It is up to you as the player, though, to choose a more significant loss or more effort to get one.

If you're into PvP, you may be able to get a chef's hat by defeating a player who has it in the Wilderness. It's quite risky, as you're never sure if they have it in their inventory to drop. There's also the risk of dying yourself and losing most of your inventory by dying accidentally or otherwise.

Whichever way you decide to get it, we hope you continue enjoying Runescape. Happy cooking!

Runescape May Behind the Scenes
<p><strong>Peak out into the Runescape!</strong></p>