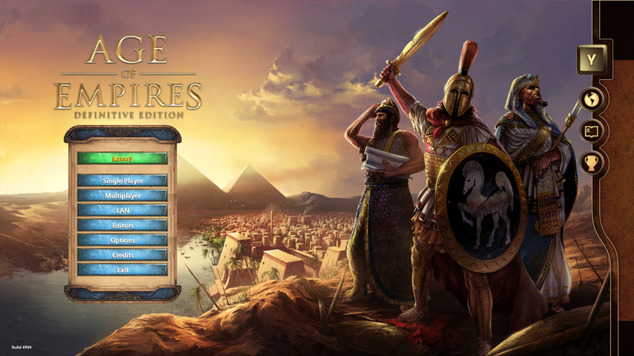 Age of Empires is a game that lives long in the hearts of many 90s children. The original Age of Empires was first released in 1997 – over 20 years ago now – but still enjoys a cult following as does its sequel – Age of Empires 2. The Age of Empires series has inspired dozens if not hundreds of other real time strategy (RTG) games, but nothing really comes close to the original. Age of Empires was always a history based RTG, players could play as a number of civilisations from across history including the Romans, Aztecs, Babylonians, Macedonians amongst many others. But what if the team behind Age of Empires - Ensemble Studios – decided to create a modern Age of Empires? What likely civilisations would be included? What would be their strengths and weaknesses? Would they have a super strong but expensive military? Would a team trading boost mean that they gather gold at double the rate of their enemies? Here’s how we think a modern-day Age of Empires would look!

Back in Age of Empires 2, modern day Sweden was occupied by the Viking civilisation – but hundreds of years can change a lot! These days, Sweden is not the aggressive and pillaging mass of land that it once was, far from it, they are one of the most peaceful nations on Earth with a government that is very accepting of people from all walks of life. Sweden’s capital city of Stockholm is one of the most beautiful in the world so the civilisation of Sweden you would expect to have exquisite looking buildings. Sweden’s main exports include steal and wood so you can be sure that Swedish villagers will receive wood chopping bonuses and a discount for their blacksmiths. Sweden is also known for its high levels of fish exports, so we have decided to give Swedish fishermen and fishing boats a 20% increase in gathering speed. Mixed with their pacey wood chopping skills, Swedish players should have no problem building up their food supplies quickly once they purchase a dock/fishing yard.

Modern day Sweden is also seen as quite a diplomatic nation given that they do not have any major enemies, therefore we have given them with a trade cart bonus which would allow the trade carts of the Swedes to bring back 10% more trade for its players.

Age of Empires 1 and 2 had the Persians, but Age of Empires modern edition has Saudi Arabia. Saudi Arabia are a nation that now has a lot of say in the big wide world – thanks to their oil fields. The country in the Middle East is mega rich thanks to their oil exports – and oil means gold. Saudi Arabian villagers will mine gold 25% faster than normal whilst the countries 0% tax rule means that Saudi Arabia will be the number one civilisation to play as if you want a civ that makes lots and lots of gold very quickly.

Saudi Arabian units will also be highly resistant to enemy monks once they purchase Wahabism at their monastery, this will give their units +50% conversion invulnerability.

Ireland have a long and rich history and would certainly be a fun civilisation to play as, although it is hard to determine what their unique unit would be, not a leprechaun, definitely not a leprechaun. Modern day Ireland is, after all, known in part for its happy go lucky people. It is no surprise that the Irish are good at beating games involving luck which is why Rainbow Riches cheats is popular reading material in the country as is James Joyces’ Dubliners and it is for this reason why we have given Irish monks a conversion bonus. The Irish people themselves are known for their luck of course which is why their ‘luck of the Irish’ bonus will give them more gold trade via their trade carts.

The country has a history of migration, tens of thousands (at least) sailed from Ireland to the east coast of America in the 1840s so we figured to ensure that Irish transport ships would be some of the best in the game. The Irish will also receive a bonus to their buildings given the recent ‘bloody history’ in the country involving the IRA and the British. The Irish are also extremely hardy when it comes to surviving food shortages and sieges, the Irish will have a unique technology known as the Potato Famine. Once upgraded at the university, it means that they will be the only civilisation in the game whose villagers cost less than 50 food (45 food).

There could be no modern-day Age of Empires without involving the United States of America (USA). The USA is currently the mightiest country in the world with a military force to boot, hence why we have decided to give them the Military Might unique technology which will ensure that American military units will cost -25% food. They also have civ bonus called World Conquerors which allows their ships to move across water 50% faster than normal.

The country in terms of land size is also one of the largest on the globe so thanks to the countries GMO farming, another civ bonus the Americans have will be GMO farmers which means that USA farms will produce 25% more food. USA is also known for its presidential home so it will have a unique tech called ‘The White House’ which, when bought, will mean that all USA buildings will cost 25% less stone to build. American monks will be extremely strong and powerful too and thanks to their ‘Make America Great Again’ unique tech, USA monks will convert enemy units 50% faster, making their monks very persuasive when they sing their Make America Great Again conversion song.

The White House: All military buildings -25% stone to build

Malta is a tiny fortress like island in the middle of the Mediterranean ocean. Malta became mighty under the leadership of the Knights of Saint John who built the capital city Valetta into a huge fortified town by the sea. Due to the strategic importance of the country, Malta has been invaded numerous times and has been occupied by numerous different civilisations. Malta was also bombed heavily during both World Wars, but the Maltese people were extremely resolute during the sieges which is why Malta has a civ bonus which gives Malta’s villagers +35% HP. Modern day Malta has seen the island come under lots and lots of construction, therefore Malta’s villagers have +5% in building construction speed.

We have also decided to give Malta an Island Fortifications unique technology given that they have come under so many sieges in their history.

Island Fortifications: All walls have +50% HP

Do you agree with our picks of modern-day Age of Empire civilisations? Let us know in the comments section below!