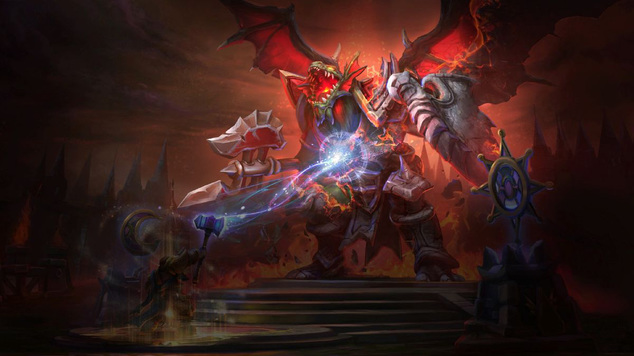 Dragon Shire is a deceptively complicated map. Having a simple objective with many different strategies to capture it. Before we delve too deep into the specifics, let's start off with draft compositions for the map.

A very common and easier strategy on the map is to have a strong solo laner, a strong duelist with waveclear in middle, a tank that can hold the rotation from middle to bot (also called tri-bush), and a ranged DPS who will win the 2v2 or 3v3 bot with a sustained healer in bot. Typically, the most important hero is the middle hero as they dictate the flow of the game through their rotations from mid. As a few examples of strong heroes for each lane:

Each lane has its own goal of what it wants to accomplish. Here I will break down each role into their separate parts. 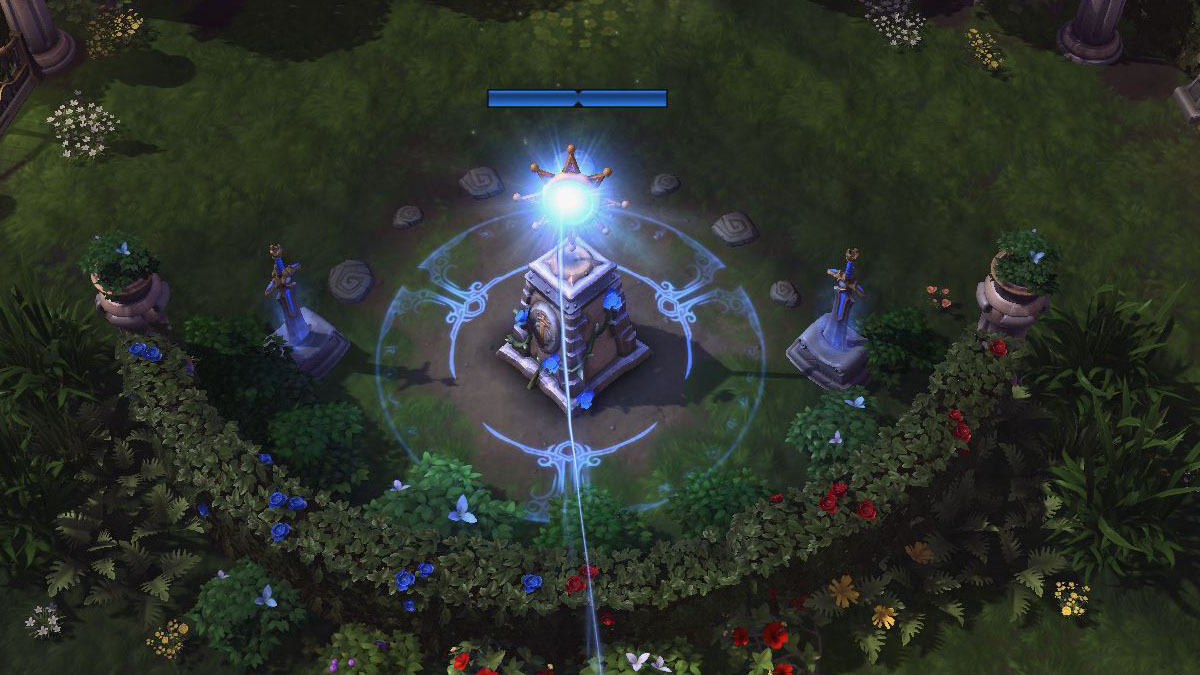 If you are winning shrine then you probably want to play slightly more passive as the enemy mid laner will be looking top more often. You still want to get damage on the enemy buildings whenever possible, either by seeing the enemy mid laner on the map or knowing that your mid laner is close by to help you out if enemies appear. You will be reacting to how the enemy is playing for the most part. If they leave to take bruisers then you should do the same. If they head middle to attempt a gank, then early game you want to keep soaking top to gain a lead. Later in the game you want to follow them in case a teamfight breaks out middle or bot.

If you are losing shrine then your team has a few options. They can either look to win top through the use of bruisers or having your mid laner rotate top, or they can focus on bottom and let you hold the line at your buildings. You are mostly top to keep the enemy top laner here. Make sure that if they leave you grab top shrine.

Holding Shrine Half of the Time

This is the least common of the three. This can happen when one top laner has better waveclear but weaker dueling as they can clear the wave and cap shrine while the other top has to clear the wave first before recapping. Typically this only happens when a team wants to stall out the game to allow their heroes to scale. If you have the stronger waveclear you want to keep stalling by grabbing the shrine whenever possible and roam whenever it is not possible. If you have weaker waveclear you want to make sure you are catching experience until your team wants to look for a Dragon Knight. When this is the case you can miss experience to hold the shrine, giving your team a chance to cap the Dragon Knight.

Middle is often the most important role in this style of play. They have the freedom to roam either bot or top, determining the flow of the game and where fights will occur. This usually occurs in a few steps. 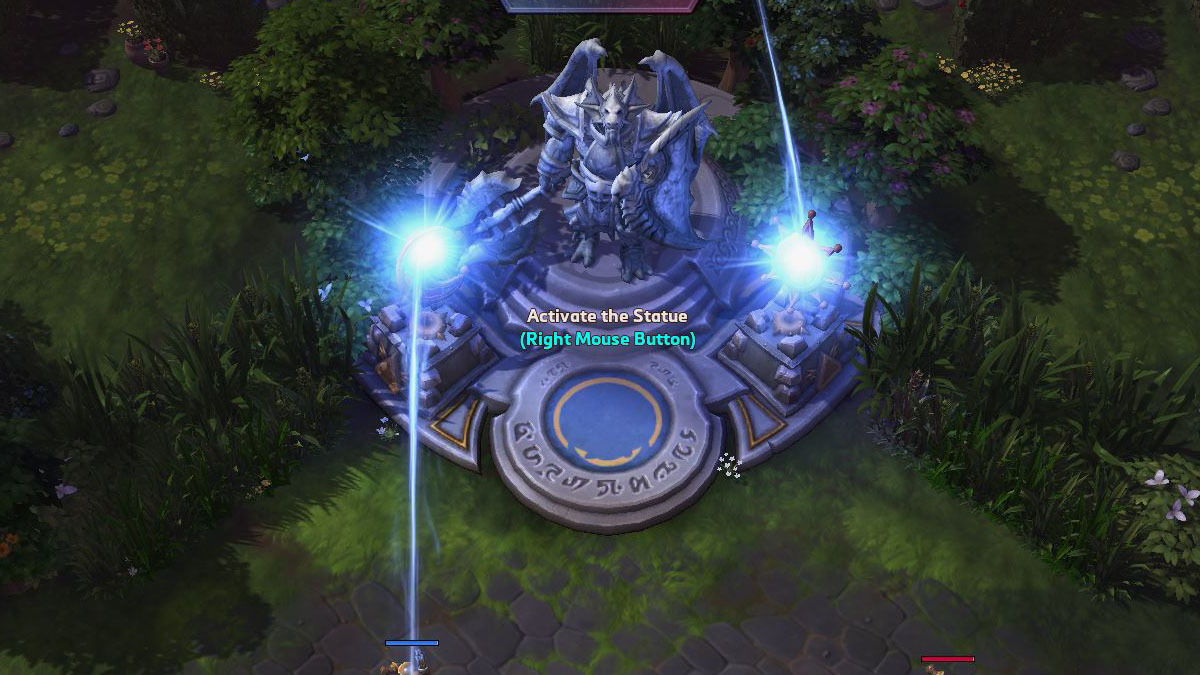 First things first, you need to clear the middle minion wave. If you are able to pressure out the enemy mid laner then you should always do that first. If you cannot, then just avoid them and clear the wave as fast as possible. Once the wave is cleared you should look at which of your lanes is winning. If you have drafted properly, you should be winning either top or bot but unless your opponents drafted poorly, you will not win both.

If you can rotate first then you likely want to head to the lane that is losing to attempt to win it. If the lane is unwinnable even with your presence, head to the winning lane to try to get some damage on buildings or look for a pick. If you rotate second, follow the enemy mid laner if it means you will win the fight and hold the shrine. If you cannot win that fight, head to the opposite lane as they enemy mid laner to apply pressure there by wither capturing the shrine or looking to damage buildings.

For the majority of the game. You will be attempting to control the tri-bush between middle and bottom. Harass enemies that try to rotate through here and help bottom or mid if enemies overextend. If your bot lane can win a 3v3 but not a 2v2, head there often to win the shrine, but don't stay bot forever. If your team grabs a pick bottom. Head bottom to hold the shrine to allow your bot laners to rotate middle for the DK. You want to slow enemies rotations and be a constant threat to enemies on the bottom half of the map. 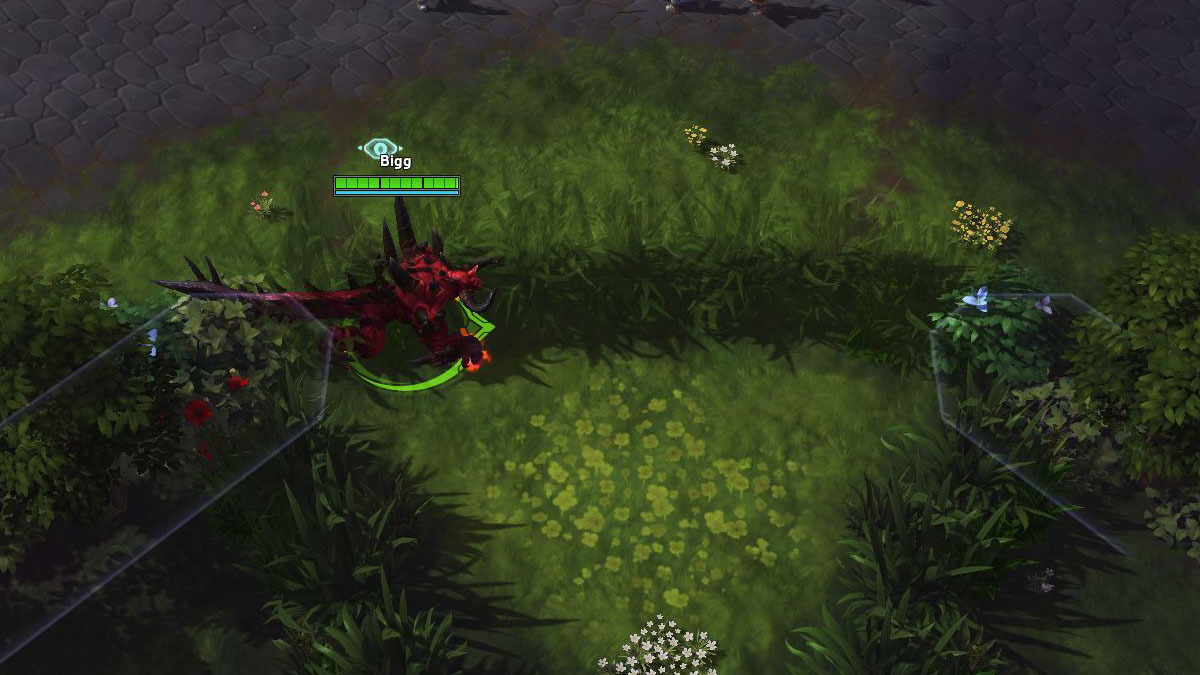 Your main goal is to hold the bottom shrine. If you cannot win the shrine 2v2, call for your tank to rotate bottom often to grab the shrine and look for picks. If you win shrine. Try to push your advantage by damaging buildings with poke or by grabbing the siege camp to push. When you get a pick bottom, head middle after your tank has come bot to push enemies away from whoever you want inside the DK as they cap.

Your job is fairly straightforward. You stick with the ranged DPS for the majority of the game. Keep your CC for when enemies attempt to stand on the shrine to punish them or stall long enough for your tank to arrive. If there is no pressure bottom and you hold bot shrine, rotate middle with the tank to look for a pick or to heal the mid laner and tank.

These will be the goals that each lane is working towards while doing their individual plays. The biggest goal is to always be holding at least one shrine or to have control over middle. If you fail this then the enemy team will secure a DK. Events that will lead to losing both shrines and middle control are deaths and overwhelming pressure. Deaths are straight forward but the pressure might not be. Pressure can be from minion waves that need to be soaked mercenary camps, or experience disadvantage. Make sure you do not overcommit to clearing camps as it gives enemies a good chance to grab the DK. A way to gain a lead without kills or the DK is to outsoak the enemy team or slowly damage enemy buildings until you can kill them, giving your team an experience advantage, leading to DKs or kills through your talent advantages.

Merc camps can have a huge effect on the outcome of a game. The timing can determine whether it just gets cleared for free or it secures a Dragon Knight. 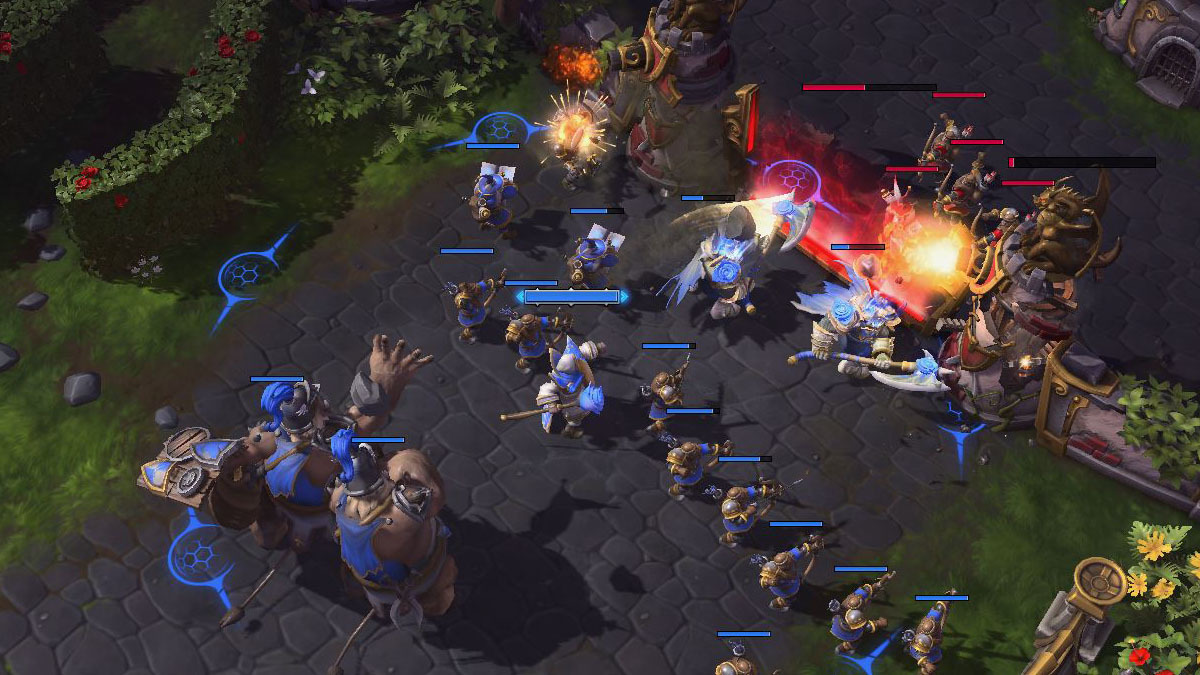 The Siege camp is the easier of the two to know. It is in a less defensible position and thus can be prone to getting invaded. Due to this, you typically want to take it as often as possible, taking the camp right at 1 minute as it spawns to deny any invade as the enemy team will have to grab their camp before they can invade under most circumstances. As far as playing around them, usually your tank will rotate down to bottom while the Sieges are up to either help bot kill the enemy Sieges or to push their camp to the enemy wall for damage. Later in the game the Siege camp can be timed to line up with the bottom Bruiser camp to have a very strong push bot.

The Bruiser camps are a little trickier. The top Bruisers are often taken to force enemies to rotate top, allowing for a play bottom, either some wall damage or bottom Bruisers. They can also be taken to secure top shrine for a short time while enemies have to clear the camp, allowing for opportunities to grab a Dragon Knight. Look at where enemies are focused and try to pull them away from it whether it is top shrine or bot shrine.

Eventually, some team will control a Dragon Knight. When this happens, here's how to defend or attack effectively. 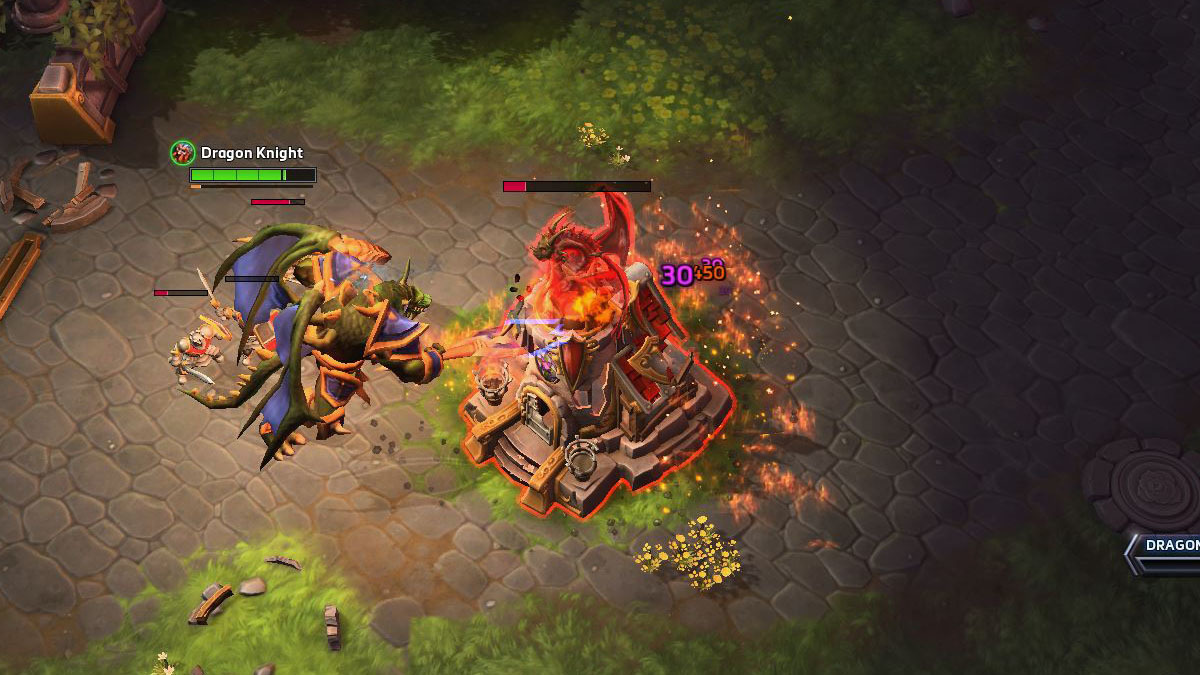 For the most part, you will stay behind your wall or fort to attack the DK while it attacks your buildings. The Dragon Knight will always get damage is used correctly, but make sure you are applying damage to it whenever possible to lessen the damage. One enemy hero will be inside the Dragon Knight, allowing you to play slightly differently depending on what enemies are missing. If it is an enemy tank, you can play slightly more aggressively since they will be lacking some of their CC. If the enemy solo laner is inside, play safer as this is often the best role to be in the DK. If the enemy happened to put their healer in the DK then slowly poke at the heroes behind the DK until they are low, allowing you to step out and fight. If enemies have one of their DPS in the DK, you can play slightly more aggressive since they will be missing some damage to follow up CC.

Attacking with a Dragon Knight

Typically you want to take the bot fort, mid fort, bot keep wall, bot keep in this order. If enemies have very strong defense it can be wise to head top earlier in the game to try to gain an experience advantage through structures top. When pushing alongside your Dragon Knight, try to attack enemies that come close to the DK, to push them off and preserver the DK's health. If no enemies are within range safely, attack structures. If you are in the DK, attack buildings unless your team gets some good CC on a target. Kick away enemy sustained DPS whenever possible and kick enemy tanks whenever enemy sustained DPS is unavailable.