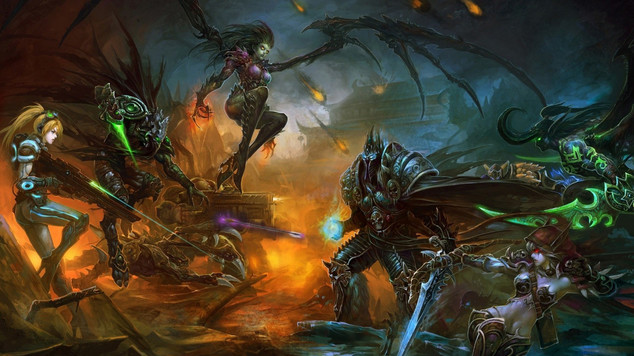 With the release of OS X 10.11 (El Capitan), the question many Mac gamers are wondering, when are developers going to support Metal? The answer to this is, Soon™. Blizzard has officially commented on their official forums that Metal is already working internally on World of Warcraft. Furthermore, it'll be released publicly by years' end. On top of this, Starcraft 2 and Heroes of the Storm are expected to follow shortly after.

I have personally poked around Binaries for latest Warcraft and SC2 patches and found that Metal code already exists in binaries. This proves that development of Metal for these two games is well under way.

Diablo 3 may be in a different boat, at least for now. Being 32 bit still, it's unlikely to be able to migrate to Metal until it first migrates to this decade. Metal is a 64 bit API and will likely require a more modern 64 bit binary for Diablo 3 to exist first. This doesn't mean it won't happen eventually. I would just not expect this to happen in near future. We're probably looking at at least 6 months for D3 to see anything. If not longer.

What kind of performance can we expect when Metal comes? That's hard to say. Metal is a 1.0 api that will need refinement for sure. Even Blizzard has stated that Metal needs some software updates, indicating that although they have it working internally, it may still require additional attention from Apple to be viable. Arstechnica recently released some of their own internal testing of Metal vs OpenGL that was interesting. However, this test data used an experimental pre-release app not yet available to masses. Furthermore, it also lacks any real time gaming analysis.

One thing is clear, some games/tests will benefit from Metal more than others - particularly games that are very CPU bound. Freeing any CPU for Blizzard games should go a long way since Blizzard's games are very CPU bound. This is where I expect Metal to shine the most on Blizzard's games. Freeing that driver overhead allows more CPU to be focused on non-GPU tasks. In my tests, if you have a powerful enough GPU to keep up with WoW's demands, it's most often the CPU that's bottlenecking the GPU for World of Warcraft. Your GPU can spend time waiting on the CPU to give it more work.

Should you rush upgrade to 10.11? This may depend on what other games you play. 10.11 brought nothing new to OpenGL or even video drivers really (besides supporting Metal). You will likely see 0 gain performance wise from 10.11. That's not to say 10.11 doesn't bring a whole slew of other neat features and improvements. I actually noticed WoW launches faster on 10.11 vs 10.10.5.

That said, 10.11 is brand new, cutting edge. This means 3rd party apps that aren't fully updated for it yet may have a host of new problems. You may want to check support articles for other games such as Aspyr's article to see what upgrading to 10.11 may do to your games, as well as monitor when potential fixes may arrive for said games. Gameagent also had a decent article on upgrading to 10.11 available here.

It should also be noted that although there is no support article from Blizzard on it, "windowed full screen" in pretty much all of their games is broken on 10.11 currently. Many users on official forums reported low FPS, freezing, and other issues with this mode. Users have also however reported that regular full screen and regular windowed mode work just fine, so just avoiding the hybrid setting avoids pretty much any issues with 10.11.

Already upgraded to 10.11 and wondering if your computer supports Metal? You can download this test app to see if Metal is supported or not by your GPU. Furthermore, you can install a Metal-based cube screen saver to test it as well. Blizzard has also posted a list of supported GPUs. It's important to note the (or later) part which includes any GPU newer than those listed. I can also say, thanks to 3rd party Nvidia web drivers, Metal even works on unofficial Mac GPUs such as Maxwell 900 and 750 series cards. My Nvidia 980Ti has perfectly working Metal on web drivers. This means even if you don't have a 2012 Mac, if you have a Mac Pro you can toss in some pretty powerful Metal supporting GPUs and be ready to go. This also means Hackintosh community is also good to go with Metal.

In conclusion, Metal is the future of Mac gaming. It's clear Apple is moving away from OpenGL. They refuse to keep it up to date and it's now about 5 years behind in technology. If you intend to game on Mac, you NEED to update to 10.11 eventually. Many games will continue to support OpenGL for older hardware for a time, but the best performance and features are no doubt going to be shifted to Metal going forward. This is a non-optional upgrade. Fortunately, it's a free one.

I'm very active in WoW community as a whole. Besides being maintainer and current author of Deadly Boss Mods, I'm also Mac Tech support MVP on blizzard forums and a very active raider in Something Wicked. I play a protection Warrior named Omegal on US-Whisperwind.
Follow Adam on Twitter Read more articles by Adam