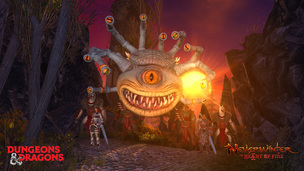 Neverwinter at E3 2011 - A Closer Look at The Foundry Toolset
Cryptic Studios is widely recognized as the industry leader in character customization. With upcoming co-op RP

Creating your own adventures has been as integral a part of the style="font-style: italic;">Dungeons & Dragons
experience since the very beginning. Pair that with the fact that
players of the style="font-style: italic;">Neverwinter Nights
series have generated thousands of custom adventures for their peers to
enjoy, and it should go without saying that for Cryptic
Studios’ first foray into the hugely popular Forgotten Realms
setting, Neverwinter,
there are some fairly lofty expectations in the user-generated content
department.

Having built a reputation as masters of character customization over
the years, Cryptic seems well suited to tackle the custom content
creation side of style="font-style: italic;">Neverwinter.
Being the type of gamer who often enjoys the tools shipped with RPGs as
much or not more so than the official campaigns they’re
shipped with, I was certainly excited to learn that for our E3 meeting
with Cryptic we would be getting a detailed look at what makes The
Foundry tick.

The two primary things that instantly stood out for me were also key
design decisions made early on. The first is that The Foundary is
accessible enough for first-time builders or aspiring dungeon masters
to get their hands dirty without having to first earn a
master’s degree in game logic and engine programming. So for
anyone who found the learning curve with the tools for titles such as style="font-style: italic;">Dragon Age: Origins,
Oblivion,
or even the style="font-style: italic;">Unreal
Editor a bit too steep as an entry point for modding, you
shouldn’t have any of those same issues with the Foundry.

To me, one of the biggest pitfalls of most user-generated content tools
is that they’re awesome for dedicated modding teams with a
solid grasp of game design, but are rarely streamlined to the degree
that you’d see in games like the first two style="font-style: italic;">Neverwinter Nights
games, City
of Heroes or even the style="font-style: italic;">Sims.
In each of those titles even a beginner can open up the virtual toy box
and make something they can not only call their own, but be proud
enough to share with fellow enthusiasts.

To that end, The Foundry combines a user defined workflow with easily
accessible tools and assets, and does so exceptionally well. The
workflow in particular can be an important factor, because not all
dungeon masters approach the creation process in a set order. Some
might have an amazing story they want to tell, so prefer to nail that
before tailoring the spatial specifics to suit. Likewise, you can
choose to begin building out your adventure visually, tweaking it to
perfection before deciding encounter placement, story, or even pacing.

The available assets may appear somewhat daunting at first, but
everything is neatly categorized into various kits based on a general
theme. For example, in the span of 15 minutes we were able to open The
Foundry, dig into the crypt-themed kit and piece together a fully
playable mini-adventure complete with progressively difficult
encounters, key NPC contacts, and get a feel for how easy it is to
build out naturally flowing conversations. All great stuff so far.

The second major standout element for me is the fact that, if
you’re a more experienced mod maker or have worked with
content creation tools in the past, there’s enough depth to
the system for you to genuinely make something highly unique. I was
also happy to learn that dual monitor setups will be fully supported,
so that’s another giant green checkmark in The
Foundry’s win column in my books.

Another mark in the win column is that you can elect to use known NPCs
from the official storyline as part of your custom quests and
storylines, essentially expanding on the lore established in the core
game in the process. Not only that, but you’ll also be able
to choose specific entry points for your adventure within the city and
the surrounding areas, or even do things like hide important plot items
in the potted plants throughout the city.

Certain things such as the ability to morph terrain or handpick the
stats on loot in your custom maps won’t be in The Foundry, at
least not at first. Cryptic is aiming to strike a perfect balance
between ease of use, but with enough depth that you can truly go nuts
with how much of your map you want to custom tailor to suit the kind of
story you want to tell.

The build of the Foundry we were shown is still a work in progress but,
taking the above into account, it’s already looking like one
of the most user-friendly content creation tools out there. Yet
it’s also one with enough depth to keep the serious DMs fully
immersed in the joys of world building when style="font-style: italic;">Neverwinter
releases later this year.