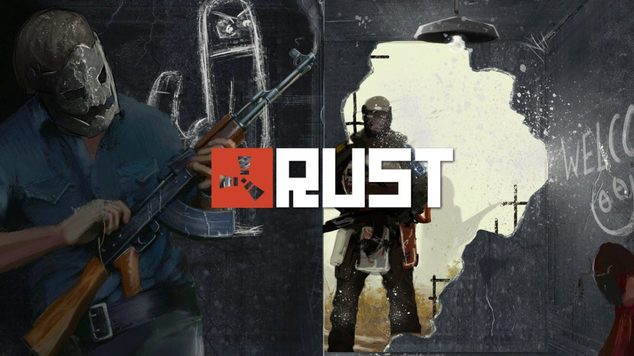 Released into early-access in December 2013, the MMO survival game Rust was met with great acclaim, which continues to this day. Designed by Garry Newman, the man behind Garry's Mod, Rust offered a level of FPS survival gameplay which many dreamt of for years. With technology finally catching up with the ideals, the game released to the public, and still sees consistent updates on https://www.rustafied.com/.

First of all, to put this into context – our team loves Rust. We think it is fantastic, and we think it is terrifying and tense but, most of all, after some discussion, we find it fascinating.

Rust is one of those rare games which can reflect the part of our personalities which arise with minor levels of anonymity and a fight for resources and survival. You start, effectively, as a caveperson. As you play, you adopt this model into your persona, as the world itself shows just how harsh and unforgiving it can become.

Before getting started, we should note that this is not a game without minor controversies. Most of its ratings come from Steam, and as a user-based system, this is often heavily influenced by less than well-adjusted individuals. An example of this comes from the fact that in Rust you cannot choose your sex or base appearance. Instead, this is dictated by a background algorithm. This has caused occasional review bombing by the uncontrollably irate.

Compare this to more professional rating systems like those for www.mobile-casino.com. Dedicated websites such as this one tend to be far more professional. They are also more objective in the way in which they deal with what is included, in this case, that would be bonus deals and free spins. What we're getting at is that, if you don't already know, you shouldn't necessarily judge a game by its angriest user reviews.

Our favorite moments in Rust are in the early game, on fresh servers. In these cases you creep about, armed with only basic weapons and your wits. As you mine or cut wood for your base you need to keep a constant eye on your surroundings, as claiming the work of others is much easier than doing the work for yourself.

Each person passing by, even when outwardly friendly, is a real threat. They might be only wearing a pair of cloth pants, but if those pants conceal a pistol? What if by getting close they only want to ensure they don’t miss their target?

If they pull a gun, what do you do? Do you stand and fight, or do you try to hide, and make your way home under cover of the almost pitch-black night?

These issues give us so many ways to illustrate our humanity, in a world where cruelty is often the easiest option. A big part of this comes from the ability for proximity voice chat. Just as in real life, this makes the people you talk appear louder the closer you get. This means when you creep by outside a base you can listen for the occupants, to get a hint as to their goals, their secret stashes, or, more often, their favorite anime characters or policial views.

On your own team, this helps build the idea of community. Group tactics and shorthand became key, and this aids the game in becoming a real team-building exercise.

The worst issues of Rust come from two fronts. The first is that of time, and the second is that of humanity.

As a survival game, where players who log out find their characters going to sleep with gear and inventory maintained, there is always going to be a problem of timing. Keeping yourself and your base safe means enormous time-investment, which isn't exactly a great fit for most people's lives.

This also raises the problem of ganking. Fighting people at your level is great, but too often established clans adopt a more one-sided policy. Any new players, regardless of affiliation, can be targeted. These players can find themselves hunted down with rocket launchers, while they carry only sticks for defense. Their wood homes can be reduced to nothing after the first night.

Issues such as this have been common in games for years, often requiring a specialized approach to repair. This will differ heavily depending on the game, as https://www.forbes.com/ explored with similarly online-only game Fallout 76. While, at the moment at least, server wipes due to patch updates help keep this under control, it does raise questions as to the long-term viability for less than hardcore players.

Mods can do a great deal to tackle some of the more egregious issues in Rust, but these can come at the cost of reducing the tension which sets the game apart. Being able to teleport to several locations can fix timing problems, for example, but it can also lead to players building in positions which might prove unassailable.

Rust is amazing in that so much of its gameplay is illustrative of problems we have with our fellow man. It’s a game that thrives on clan warfare, as we begin from such limited resources. Even as players reach the endgame, and resources no longer become scarce, the tribal attitudes from the early game persist.

Not since the WoW blood plague have we played a game which made us feel more human, for better or for worse. The game regularly goes on sale if you want to check it out, just be sure to leave your faith in humanity at the door.

To read the latest guides, news, and features you can visit our Rust Game Page.