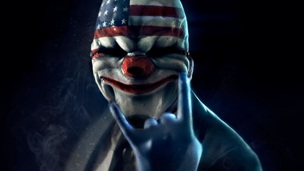 Apart from the day of the week we all look forward to and a chocolate
bar, what is style="font-style: italic;">PAYDAY?
This was the very question I asked when I visited the Sony Online
Entertainment Booth Tuesday afternoon. The developers from Overkill
were happy to answer that question for me.

This action packed FPS is completely co-op as you and your teammates
try to pull off a heist. And, if you're the lonely type, worry not,
your team will always be four members and the computer will control any
of the teammates that are not controlled by a real player. While the
game is not cross-platform, it can be played on the PC or PlayStation 3
so you'll have plenty of opportunity to bring friends or make new ones
if you so choose.

Playing through the bank heist was what really got me hooked on this
game. It does play like one would expect a FPS to play out with
different weapons, ammo, health packs and the like, but the story
unravels as you try to rob the bank. First, you'll need to get the bank
manager under control. You can do that either by wounding him or by
threatening him with your voice. That's right, your in-game voice is a
function and a highly useful one. Intimidate hostages or even police
with your commanding voice. Do it well enough and you may even be able
to convince a cop to cuff himself.

After capturing the bank manager, the plan rolled on as we planted
explosives, drilled through some doors and other mini-missions one
would expect to have to perform in a heist. It wasn't without challenge
though. Eventually the Police were able to get into the bank and begin
an assault. When that happened we had to stop what we were doing and
regain control of the bank. Should one of our teammates get injured or
captured, it would be up to the rest of us to either heal him or trade
a hostage for him.

To the disappointment of my teammates I kept forgetting to take out the
security cameras. Due to my negligence the cops were often able to move
in on us unexpectedly.

So what happens after you complete all the heists? Does it have any
replay value? Very much so. The game includes RPG elements which allow
for character advancement. The more heists you perform, the more levels
you gain (up to 85) and the more abilities you unlock. These abilities
can come in the form of faster reload time, better accuracy, more
damage and other abilities that will allow you to perform better and
faster. All of these abilities come in the form of advancement trees so
it is up to the player to decide which areas they want to improve in
first. Eventually it is possible to max out in all branches, but for
the sake of optimization a player may choose specific paths to unlock
first.

The game is scheduled for launch later this year so keep an eye out. If
you're like me, being part of a heist is a very hard thing to resist.

To read the latest guides, news, and features you can visit our PAYDAY: The Heist Game Page.