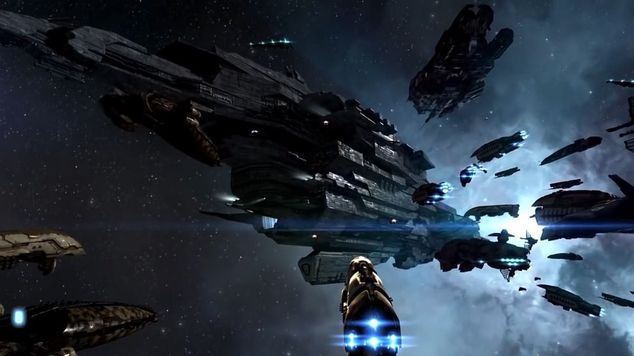 Project Discovery at EVE Vegas 2015
EVE Online is getting an update to help cure cancer and other diseases, rewarding players with ISK, and we've g

Project Discovery is an upcoming update to EVE Online that will take the captive audience of EVE players and utilize their spare attention for some good and fun by helping to map Human proteins. Microscope images of proteins will be handed to players, these images require a Human eye in order to decipher the various protein structures and other science like things beyond my simple southern mind. The critical bit is that EVE players, notorious for having to stick to their PCs while traveling long distances (to avoid being ganked), will be able to play a fun mini game that’ll allow them to do good and earn some in-game rewards.

The entire concept is a bit higher on the science poll than my understanding, considering the basic principles of how clouds formed to me involves some dirt in the sky and water, but it’s a very interesting approach with a lot riding on it. Mapping human proteins will give researchers the ability to cure more diseases and help fight cancer, while players will be able to earn some extra ISK for their pockets.

Proteins are one of the most common causes of disease in humans and drugs target proteins, therefore, studying proteins is very important. Thus the Human Protein Atlas was founded in 2003. It has mapped so far 86% of the human protein-coding genes have been covered. The atlas is a publically searchable database, with updates released yearly.

While I didn’t get a chance to play the mini-game, I was there to see a presentation on how it was played. You basically pick various protein link chains and submit for verification. The first few you take on are tutorial proteins that provide you a chance to try out some images that have already been verified to show your results. After that, your submission will clear in a few days as other players work on the same images to come to a conclusion.

I’m not specifically sure about the science involved in the process, but it does look rather neat, and will provide EVE players a neat mini-game to toy around with without having to leave the window. This is really important, because as I said previously, EVE players do not abandon their ships while traveling.

It’s rather nice when you can marry the attention span of gamers to something that can help, without it also involving maxxing out processors or lagging a system (like [email protected], which is a very good cause, just not while a game is running). This project is similar to [email protected], but instead of an automatic process, they require a set of Human eyes to figure it out.

Hopefully the project will take off and be a success. In speaking to the developers, it seems like there were some interesting bits to get it to work with their game, but everything should be smooth sailing once it goes live. If you play EVE, be sure to give it a try, you might like it!

This update will be coming soon and is currently part of the EVE Online roadmap and the track to the upcoming Structures / Citadels expansion.