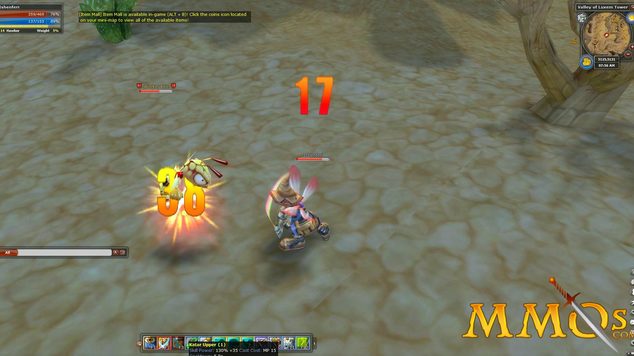 ROSE Review At GameZone
A gentler type of MMO

"A gentler type of MMO"

MMORPGDot.com reports that GameZone has a review over a different type of MMO, R.O.S.E. Online:

The name itself is a bit of a mystery, likely losing something in the translation.
It supposedly stands for Rush On Seven Episodes, and what exactly that means
… well, that might be something only the developers truly know.

But shorten it to ROSE (or R.O.S.E.) Online and you get an image of a fragrant
flower blossoming in the landscape of MMOs (massively multiplayer online games).
Now that is an image that befits this title. ROSE has been billed as a much
gentler game and that is apparent from the onset. The characters have that
Japanese anime feel, but are lush and colorful – just like the environments.

The game begins with picking an avatar and alignment. Then you venture off,
as a Visitor, to the fairy in the newcomer area. Your first task involves
learning the barter system (trading, buying and selling) as well as the combat
system. You are out there killing jelly beans and bugs that look like caterpillars
(called choropies) but don’t worry, the challenge soon ramps up and
you will be, before long, killing flowers, pumpkins, bees, ant-like critters
and then wolves that wear chef’s hats and carry carving knives. But
at the start you are sort of like an anti-candy psycho gardener – which
can be a good thing, especially in the context of this game.

Sounds interesting to me...