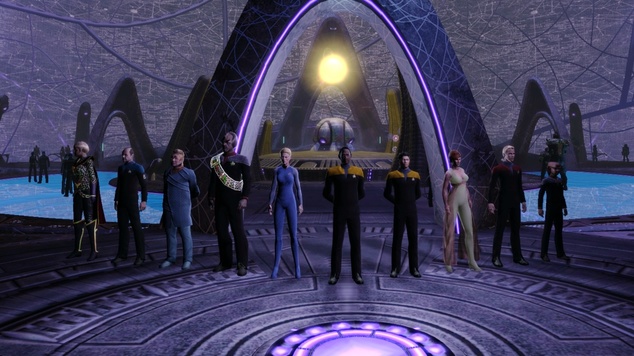 As part of our Premium
Membership Program, members get a chance to ask their own
questions of the developers for various MMOGs. This week, we talked to
Cryptic Studios about Star
Trek Online. Craig Zinkievich, Executive Producer, was
more than happy to answer questions from our readers ranging in topic
from ground vehicles, to some hints about crafting, to instancing and
raiding.

style="background: transparent url('http://www.tentonhammer.com/image/view/75825') no-repeat scroll 100% 0%; vertical-align: top;">
Ten Ton Hammer: Ground
vehicles - are there going to be any in the game? (stefman123)

Craig Zinkievich: Not
at launch. It is something that, in beaming down to all these alien
planets that we’re procedurally generating, you do want to
jump into that cool buggy that  they had in the last movie.
But no, no ground vehicles at launch.

Ten Ton Hammer: Can you
tell us any more detail about crafting? (Stormnet)

Craig: We’re
not ready to go into detail about crafting, but I can assure you that
there are a lot of crafting-like systems in the game. One of the
systems is going out and scanning anomalies, collecting alien
artifacts, bio-samples, and bringing that stuff back to Memory Alpha,
which is the repository in the universe for all data and information on
the Federation side. Also, the ability to train your bridge officers is
something that’s going to be in the game, but we’ll
get a lot more specific about that in the coming weeks.

href="http://www.tentonhammer.com/node/75824"> style="border: 0px solid ; width: 250px; height: 159px; float: right;"
alt=""
src="http://www.tentonhammer.com/image/view/75824/preview">Ten
Ton Hammer: During
space travel, how much control do pilots have over the ship? For
example, would it be possible to divert the power from the flux
converter to the shield generator in a pinch? (stefman123)

Craig:
Definitely in system space, when you’re flying around in 3D
rather than the Sector Map, which is kind of the astrometrics overview
of the game. You can transfer power to engines, get a boost, put it
into your auxiliary, which also feeds your thrusters, so you get a
little more turning radius. So you can definitely play around with your
movement based on the items that you have, whether or not you have
consoles that enhance your movement capabilities, what engine you have
slotted in your ship, as well as just moment-to-moment changing your
power balance to get a little burst. Lots of ways to change your
movement.

Ten Ton Hammer: So ships
have slots where you can upgrade your items?
style="font-weight: bold;">

Craig: Oh
yea, definitely. You can upgrade your impulse engine item on your
ships.

Ten Ton Hammer: Also with
the system space view, is there any kind of viewport, first-person
view, and what kind of camera angles are available? (stefman123)

Craig: In
system space, it is all third-person. You can zoom in really, really
close to your ship, but you can’t actually get to your
bridge. The positional aspect is so important; we tried kind of a
bridge view, the positional aspect was so fun that we kind of kept that
and sacrificed the bridge view. It’s too hard to figure out
exactly where someone is - are they on your right or rear shield?
It’s just to hard to figure it out at the pace we have combat
going.

Craig: We
definitely plan on having microtransactions in the game. I know it was
a pretty big bruhaha when Champions
Online announced it, but pretty much everyone understands
that it’s for cosmetic things. If there are any items that
you can get with microtransactions, you can also get them in the game.
It’s not a microtransaction advancement model, most of the
items are cosmetic - costume pieces, that sort of stuff.

Ten Ton Hammer: What
about PvP? Are you ready to share a little more about that yet? (Metal)
style="font-weight: bold;">

Craig:
There’s definitely PvP in the game, they’ll be
arenas as well as battleground-type maps, but we’re kind of
holding off on that a bit.

Ten Ton Hammer: How steep
is the learning curve? Can players jump into STO quickly, or will
players have to spend some time learning the controls? (Metal)

Craig: It is
something that we’re continuing to work on. The game is
extremely deep, it has a lot of strategy, a lot of things you can do
within the game, so we’re not at all concerned about
long-term viability and depth of gameplay. But we are continuing
throughout the beta cycle, throughout our internal playtest, to try to
lower that learning curve to try to get tools, get controls in place
that allow players to jump in a little easier. We want players to get
hooked and then realize how deep the gameplay is. So we’re
constantly trying to make it as accessible as possibile without dumbing
down the gameplay - without making it a casual flash game.


Ten Ton Hammer: Are there
instances in the game? Could you tell us more about how instancing
works? (Metal)

Craig: There
are definitely instances in the game. The majority of the PvE content
that is  in the game is 5-man instanced content. The episodes,
the patrol missions, the majority of the game ends up being 5-man
instances. But some of the systems we’ve put in place make
those 5-man areas feel like they’re persistent areas. You
could be directed to rescue this ship under attack,but when you arrive
there, there are already a couple people there that have just started
that episode. Then we team you up and you get to go through the episode
together. So we kind of call it “open instances” -
we allow you to join other instances, but they are still 5-man
instances and are a majority of the content.


Ten Ton Hammer: These
other areas - are they pretty much unlimited or do you predict that
you’ll need to divy those up into other instances kind of
like what we saw in Champions
Online?

Craig: The
episodic instances and the 5-man instances that I was talking about -
it’s a lot more like City
of Heroes, where you go on a mission and that’s
your mission, as opposed to unlocked big endgame instances. We have
those endgame instances in the game, but a majority of the other stuff
is not unlocked like that.

Ten Ton Hammer: Can you
tell us a bit more about the endgame raids?
style="font-weight: bold;">

Craig: We
call them “raid-isodes” - it’s part of
the endgame, but there are definitely raids at the endgame and a reward
structure that goes along with that. They’re 5-man, so
they’re like episodes, but they’re scaled up - you
can’t even do them solo well (maybe if you’re
really, really good).

Craig: There
are fleet actions, which are kind of the large 30-40 starship battles
and ground combat actions that are more like a persistent area where
you end up going to, as well as really large PvP battles. But there
really aren’t 20-man PvE raids in the game.

Craig: We
are going through compatibility testing with Windows 7, we
haven’t had any issues so far. We definitely have to make
sure we support that because I imagine that a whole lot of the new
computers will be loaded up with that.

Ten Ton Hammer: One
reader was asking about time travel, warping, and alternate universes.
Are those themes going to be present in the game? (Mordan)
style="font-weight: bold;">

Craig: Sure
- you can’t make a Star Trek game, you can’t expect
to put any story into a Star Trek game and not at some point go back in
time or to a mirror universe. So, yea, definitely, that stuff is in the
game. All of our story-driven content is really inspired by what Star
Trek is about.


Ten Ton Hammer: Going
back a little bit to space combat - how dynamic is it? Will players be
able to do special piloting moves - one example given was the
‘Kaufman Retrograde’, spinning on the
ship’s axis to fire behind while maintaining momentum forward?
style="font-weight: bold;">

Craig: We
played around with that a little bit in the beginning, but we ended up
sticking to the idea that the ships always move forward, that you
can’t apply thrust and then turn around. When we put that in,
we pretty much just had everyone in the game constantly kiting, and we
were like, ‘Wow, that’s really actually no fun at
all.’ So starships always have forward momentum. If you want
to move in a different direction, you do have to actually turn around.

Ten Ton Hammer: So
there’s no reverse at all?
style="font-weight: bold;">

Craig: There
is a reverse, but it’s really intended to get yourself out of
situations like if you get yourself jammed against an asteroid. If
you’re really really good, you can play around with reverse
in combat, but it’s very slow compared to moving forward.

Ten Ton Hammer: Will STO
have separate servers, or will it be one massive universe?
style="font-weight: bold;">

Craig: At
launch it’s going to be one shard, one universe. Bruce
Rogers, our CTO, has done a fantastic job of architecting a system that
allows us to have that one shard, one universe, and it just makes for a
much easier world to manage and easier for people who don’t
understand the whole process of figuring out which server your friends
are playing on. It’s better for that not to matter.

Ten Ton Hammer: How will
that affect players overseas? Will it all be one North American server?
style="font-weight: bold;">

Craig:
Currently Champions
European players play on the same shard and the text is localized, chat
is not auto-translated. So everyone plays on one shard,

Ten Ton Hammer: And there
hasn’t been any kind of performance hit because of that?
style="font-weight: bold;">

Craig: The
networking guys here have done an awesome job; most of the guys in
Europe are really really happy with the way that it performs.

Be sure to join us
again next week as we talk to Cryptic about Powers and Professions in style="font-style: italic;">Star Trek Online.