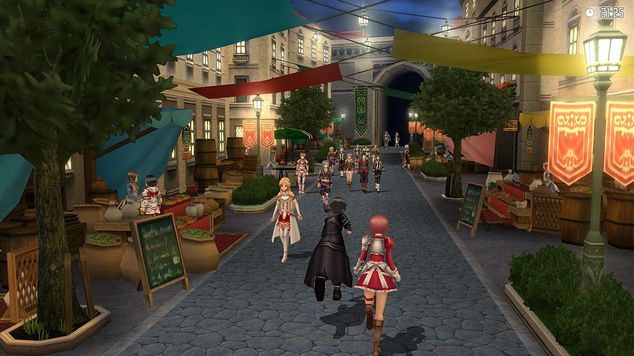 I’ve had Sword Art Online: Hallow Fragment for a few months now, sitting on my Playstation 4 with on and off playtime. I’ve deconstructed the game in various ways in my mind, trying to figure out what in the world it would even score. I’m not sure what it would score. I don’t know what it would score. I can’t even define the review for it, because it’s such an outlier of a game. It’s not good or bad, it’s some kind of meta-game designed to torment my mind as it tries to come to terms with just what in the world this game is, because it can be loved or hated for a myriad of reasons.

Alright, so here is what SAO: HF is. It’s a simulated MMORPG for your PSP/PS Vita/PS4. I’ve been playing on the PS4, and since it’s a high-def remake of a PS Vita game that was remade from a previous PSP game called SAO: Infinity Moment. The story of the game is simply as such, there is a big divergence, at the 75th floor instead of the game ending, it continues on to the real actual fight as planned on the 100th floor. This changes a lot of dynamics within the story, since instead of getting to the real world sooner, ever has to tolerate each other for another 25 levels, plus the hallow area which is like some testing zone.

The game is basically a combination of everything you could imagine, from dating sim and Persona style gameplay (which isn’t specifically unique to Persona), including the ability to take one of the about 8 heroines into your room for a discussion while under the covers all the way to real simulated MMO missions in Phantasy Star Online style combat, along with boss fights that take roughly 10 minutes for everyone to enough DPS and you can fail to get loot which, in turn means you get to do it again if you want it.

None of it is done really well, it’s all a bunch of very complicated systems that have some minor synergy with each other, and have various ways of impacting how the game plays out. There is a sizable amount of missable content, ranging from last hit boss rewards to various cutscenes, assuming you can stomach the huge amount of dialog the game can throw at you.

Which is the problem – the game has more content than I could really ever imagine a jRPG having. You have 25 floors to climb, each floor has a dungeon with at least two maps, at least two outdoor maps, and then at least 3 labyrinth levels, and a puzzle which involves generally defeating a boss to move forward, water traps, and a variety of other gimmicks.

On top of that is the Hallow area, which while I haven’t counted the number of maps, is extensively large and broken into five additional areas with harder content that ramps up faster. Staying true to the original source work, some of this content is horrifically boring as you’re far over leveled for it (because you know, everyone is stuck in the game and generally grind enemies that couldn’t kill them in order to level up).

So that’s just the combat area component. You have 100+ players in groups who will go out and fight with you, along with a cast of female sidekicks that you can romance. There is a crafting system, eastern style weapon upgrade system (+1~+15, increasing general weapon stats plus specific attributes), multiplayer, additional directors cut content (including girl avatar for Kirito), and additional content after the story. In total I think some claim there is well over 400+ hours of content in the game.

The content though again, I can’t tell you if it’s good or bad. It’s far too subjective. The game is only $19.99 on the PSN store, for 400 hours of content. The graphics are so very dated, but the game can do some really pretty settings in the newer content areas and was originally on the PS Vita. The combat is very boring, but contains about as many options as WoW did 5 years ago for specing your character, if not more. The game is a massive grind, but is designed for players who enjoy that. Everything wrong about the game is designed specifically for its primary audience back in Japan.

The audience that would love this game are people who want a very in-depth RPG with lots of mechanics, elements, and more, with a long developing story that continues where the anime left off, staying directly within the themes and producing essentially additional fanfiction for the characters in the world.

That same audience probably prefers a lot of the random design decisions, because it’s part of a genre of games, games that aren’t really produced much anymore. Remember back in the day of the old FF10 style games where there was a huge world and limitless possibilities, but part of the game’s difficulty was load screens and weird mechanics?

Looking at it for just a game, the mere fact that doing a single quest can send you back to the inn five or more times, making you walk map to map (which requires a save between each map), teleport, menu navigation, and more would rank it as one of my least favorite games, but again understanding the medium in which it comes from, it would be even easier to understand that the PS Vita would want to save on map transfers.

Yet, at the same time, it’s a very faithful recreation of the SAO world, 400+ hours of content, characters that you love from the show, writing that matches the show, hours and hours of cutscenes that are optional, and more, plus it went literally from PSP -> PS Vita -> PS4 and still looks good, and plays like an MMO, bringing back extremely fond memories of games like Ragnarok Online.

So with that said, it’s a prime example of a game where critic reviews tear it apart and fan reviews praise it. Throughout the Internet you can find critic reviews dragging it through the mud, which can be fair, as the mass market appeal of the game itself is probably null and picking this up randomly is probably going to make you feel disappointed. Likewise, though, the game shines for its fans, providing lots of new content to a world that is only updated through the anime and manga, with a different story in a different world to avoid having to stick to content players already have seen.

It’s another example of something that Japan is very good at, which is making a product directly for a niche, and then pricing the product based on how many people within that niche would buy it. This is how you get specific non-mass market shows that air in really bad timeslots because these will become DVD boxsets and they’ll make their money back through that. Likewise, while SAO Hallow Fragment isn’t the best dungeon crawler out there, fans of the series will still love and adore it, offering them a game in true recreation of the series.

So my official thought on the matter is:

If you love SAO so much you read fan fiction / read both the manga and the anime or crave generic dungeon crawlers with an obscene amount of depth, then SAO is for you.

If you love Call of Duty then pfffft or demand your RPGs to have superior polish then just obviously don’t bother, it wasn’t made for you.

I think that’s about the only way I can put it.

To read the latest guides, news, and features you can visit our Sword Art Online Re: Hollow Fragment Game Page.