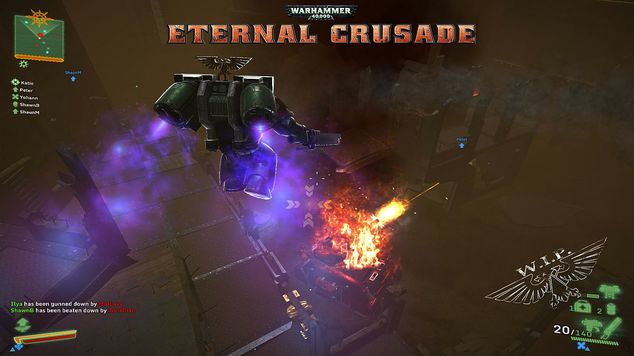 Warhammer 40k: Eternal Crusade recently handed off the development baton to Nathan Richardson, of DUST 514 and Defiance fame. We had the opportunity to ask Nathan a few questions about some of the current happenings in the community, like with the megaservers and open world behavior of the game, and some questions about the lore and crafting. WH40k: EC is still in development

Ten Ton Hammer: One of the recent announcements that the megaservers will be split regionally have caused quite a stir, understandably this is due to measures outside of your control, but could you give us some details on how it's actually going to work and how player experience would actually be impacted to help quell the rumors running amok online?

Nathan Richardson: There are a number of reasons for doing that. One is the basic fact that whatever the technology we have, what partners we chose and hardware we deploy, changing the speed of light is a bit out of our reach. As a shooter, latency is important and we simply can’t work around that.

Secondly, the technology we expected to rely on isn’t mature enough to create global “megaservers” without considerable engineering time and investment on our side, which we of course have assigned to creating a game, rather than pioneering technology. So this will happen more slowly, post-launch, where we scale up the various aspects of the game, be that the size of battles or openness of the world.

In the end, we’re firm believers in this having to be fun, first and foremost, and goals such as “1000 player battles” or “megaservers” in itself isn’t a goal that implies that there is fun involved. Having developed games which include both a megaserver with EVE online, open world massively online shooters in Defiance and 1000+ player battles, it comes up fairly quickly that the technological achievements alone aren’t delivering the fun.

So we’re finding fun first, the core of the shooter, in Founders Access, which while starts with 30+ players, will scale up over time and have more content. If the core shooter doesn’t work, the rest is irrelevant. Then we start determine, based on playtesting and feedback, do we focus more on openness vs size of battles or larger regions (ie megaserver), but we determine that based on what’s fun, not to chase an arbitrary number or concept.

This also means we’re finding partners in different regions to distribute and possibly operate the regions. Sony and Microsoft do not allow cross-play so if we were on console, that would never happen. PC is easier but we still have the speed of light. That being said, we can expect to see these regions pretty huge, especially as we haven’t decided how they are sectioned. I’m not even sure we need to split EU and US and that they are one region. So while yes, it’s not one global region, it won’t be 15 small ones either.

TTH: There is a lot of confusion around the "open world" terminology and instancing. For some, the idea of huge fights is exciting, for others who have lived through 300v300v300 fights in DAoC, the lag made it a load and die scenario. What are the current plans for instancing and pooling players together?

NR: Open world is a pretty straightforward definition, but let’s look at real open world games. Skyrim, Fallout 3, Far Cry, even Assassin’s Creed – these are open worlds to various extent but they are also massively populated with content. So for me, an open world is not just the ability to drive between outposts and fortresses, going on a 2 hour scenic route, there has to be content. We also need the technology to support it, so right now, we expect to be a more open world, with both the openness and

the content to populate those parts of the continents. There have to be dynamic encounters and battles there, otherwise we’d just be introducing a really bad driving game with slow tanks where you look at landscape. That’s just not very exciting to me – and apologies for those that like that kind of thing – but I’d rather focus our resources on the core shooter gameplay first, get that right, get that fun, then expand.

The second part is the massive battles. There are no games which are this kind of true open world with massive battles in the 1000s, that are also a “regionless megaserver”. A lot of games focus on one aspect but if they try more they tend to solve it poorly. Planetside 2 are great at massive battles but they are sharded into multiple servers per region as the cost of achieving that. Defiance managed to go 50+ in battles but the open world technology hindered it from going further as well as the client-side capability of managing 50 people in your close vicinity – since it’s an open world client.

So where do we go from here? We’ll have massive battles, our goals with fortress sieges is hundreds, outposts in the various 10s, which all lead to the fortress siege. We’ll then evolve, at first both going more open and larger battles but eventually favoring one over the other, based on what we and the players think is the right thing to do for the game.

One of the things we throw out to achieve those two goals, in addition to that damn speed of light, is the notion of one megaserver for the entire world. It’s sad but sometimes when dreams have to be turned into reality, tough decisions have to be made.

TTH: How is the free-to-play "Ork" mode shaping up right now? Many moons ago, it served as the "zerg" like army where players had weaker characters but they came in greater numbers, like any good horde army on the tabletop. Is that still the plan? Any updates on how that system will work?

NR: The free-to-waagh – as we call it – is still in there but we haven’t progressed a lot with the specifics of it. We haven’t started a lot of work on the Ork faction in terms of balancing and such, so we’re simply not in the position to give firm information.

But our direction is that yes, it fits the universe that there are a fuckton of Orks. This will eventually lead you into buying the game, unless you feel you are happy with a couple of classes of Orks for forever. I doubt it though, we’ll make it interesting and worth your time (and money) to upgrade to the full package with fun, not just through hitting a hard paywall.

TTH: Are you far enough in development to talk about the crafting system? Is crafting confirmed yet?

NR: Our short term goals is more focused on the ability to mod, gather items to mod and work our way from there. Long term, crafting will become a bigger and bigger part but to begin with, it’s much more around modding – rather than real crafting from MMOs.

We also have to realize that it needs to fit into the universe we’re doing. Space Marines aren’t exactly in the research and development business, unless you are a Techmarine. The Orks on the other hand, they like to … ahh … erhm … “gather and invent” more. So I doubt we’ll end up with traditional crafting systems but I could rather foresee you having NPC serfs which do this for you or your clan. 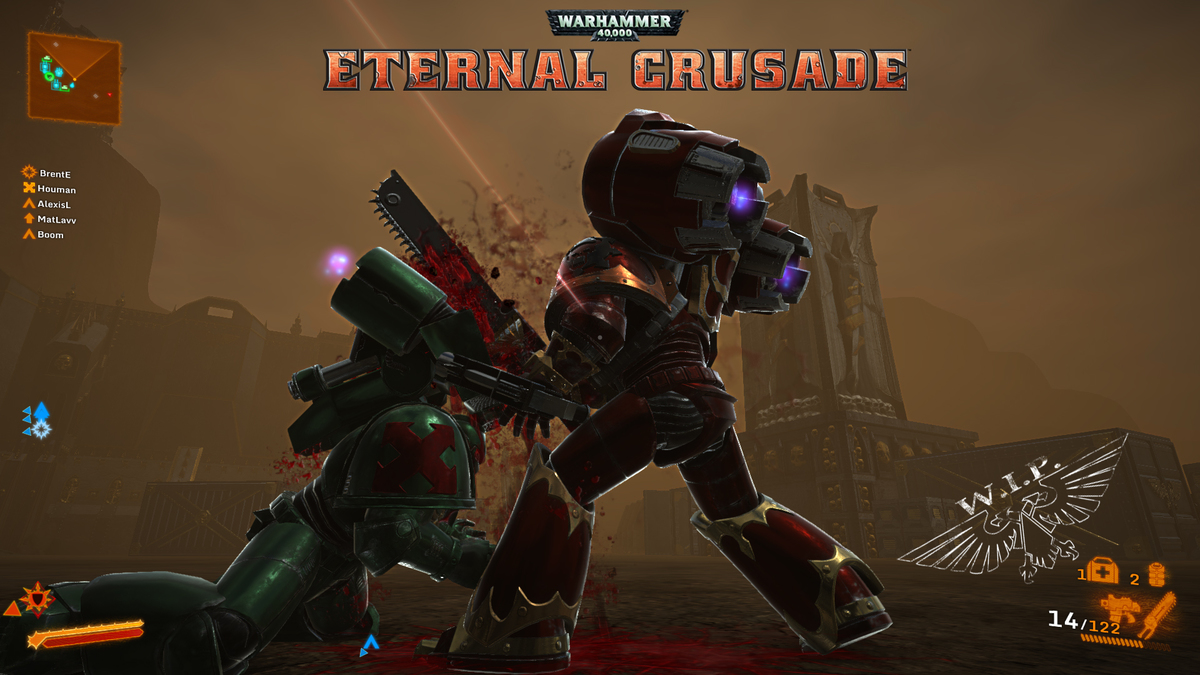 TTH: Additionally, are you far enough to talk about some of the cool weapons? Any weapons we haven't heard about yet (I'm dying for some force weapon ownage)?

NR: Hahaha, well, our problem is that there are so many weapons and we have to start small, to achieve balance. We’re still in the process of finalizing that but the core weapons will be added over time in Founders Access. New ones? None that I can talk about but there will be plenty of force weapons. Our weekly Friday twitch will be delving into the various weapons in the next month so tune into that.

TTH: Do we have an idea on which millennium Eternal Crusade will take place? Current modern time or somewhere in the past? The 42nd as the throne fails, the 41st during the gothic war, etc.

NR: We’re still in the 41st millennium, but the great thing about what we’re doing is that this is a full part of the Warhammer universe and being a constantly developed and expanding online game, with evolving and player-driven campaigns, who knows when and where we’ll end up :)

TTH: A long time ago, it was discussed that players would get a drop-pod module which would release before the game and be able to see their character and move around and the such. Is that still in the works or has that been scrapped for earlier access to the combat and waaaaaaggghhhhhh.

NR: We scrapped that in favor of the faster arriving and larger scoped Founders Access. We know that there is a lot of benefit in creating modules, both from the perspective of giving something to Founders Early to PR and sales, but we’re now at a point where we decided to focus on making and launching the game. Doing that and the modules isn’t entirely mutually exclusive, but doing both would diffuse our focus, cost us precious engineering, QA and launch resources to just get those modules out.

I’d rather put those resources on continuous development QA so we always have playable builds, engineers on server tech to reach larger battles and openness and of course finally launch something that is worthwhile for us and the players. We get server data, player data, balancing information, Founder feedback and can focus really early on finding the core gameplay, finding the fun, rather than seeing if my ass look big in that power armor inside a drop-pod alone. I think everybody wins going this route.

Besides, I now my ass looks big in everything.

I'd like to thank Nathan for taking time out of his busy schedule to talk with us. If you're interested in Warhammer 40k: Eternal Crusade, it'll be launching early access sometime this fall.

Exclusive Warhammer 40k: Eternal Crusade Interview
In a week full of surprise announcements, few have had gamers more excited than the rebirth of the Warhammer 40