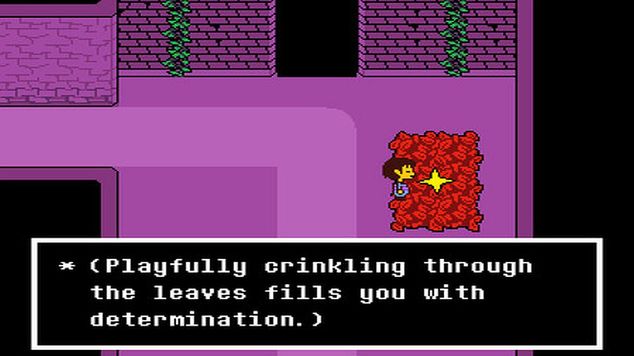 Alternative Gameplay - Lessons MMOs Could Learn from Undertale
David played Undertail and obviously needs to talk about it.

Undertale is a game that took me by surprise. It's one of those little joyous things where someone sits around all day, every day, reminding you of this very hype thing that you could be doing right now, but are instead choosing to fight space pirates in Elite Dangerous mindlessly for an entire afternoon. While ED provides stimulation, a game like Undertale provides your soul with stimulation, taking you on a one way feels train through every peak and valley you could imagine, within the realms of sanity that is. What looks and sometimes is an indie horror RPG is a fantastical journey through a promise I've long harped about.

In WoW You’re a Bad Person

Before I get to my point at large, and then gush over how amazing Undertail is, I do want to describe the unique combat system that Undertail has. You have the option to talk your way out of every battle in the game, thereabouts, and can choose to fight or talk your way out of combating enemies. This gives you the ability to never have to harm anyone, if you so choose, or to kill everything, and how you perceive the world that you’re in, is how you’ll feel about your actions.

I wrote many years ago, both in the previous column (Heal Plz) and on our older forums about how World of Warcraft creates a demon as its savior. There is nothing good about a WoW "hero." They are not noble, heroic, or in anyway doing anything to help. The majority of their actions, from a top down perspective, set everything in motion for bad guys to become badder and for more evil to roam the land. Players in WoW will decimate thousands and thousands of sentient Human-level or beyond intelligent enemies before max level, which they will then "farm" daily various encampments of "ner'do'wells" as defined by some grumpy quest NPC with a few things to mutter out, a little bit of gold, and a scarp of cloth. There is no agency, no questions, no alternate path - just destruction.

That’s alright and fine for the majority of players, mind you, as its all game mechanics with some kind of in-game story to push you along in the right direction. There is no weight given to any of your characters. Those are centaurs, before WoW you’d farmed them anyway, and WoW just gives you an incentive to do so, from a game made 10 years ago.

Other MMOs address the problem differently, FFXIV for instance, has a generally prerequisite that all bloodshed be contained to enemy combatants, and often times a battle will end in mercy. This provides you with some sense of morality for your character, but often times the choice isn’t yours to have specifically, it’s designed by the game – which is fine, but Undertale shows you something different – complete freedom to make as many and as few choices as you want.

Now, before you grab pitchforks and demand the same kind of love, care, and attention to every game henceforth (oh boy wouldn’t that be nice), understand a few things. Undertale is made in GameMaker: Studio. An RPG Maker like game engine / designer, but with more emphasis on things like sidescrolling and other game titles. Setting triggers for events is very easy.

You can set an NPC to have five flags, and then give the PC various states along those five flags, which could cause new interactions no matter what, and this would be a rather easy process. In a game like World of Warcraft or any AAA title, it becomes a little bit harder to mix that kind of nuance in. As we all saw, it wasn’t until later in the game that we started seeing phasing being used. First in some doses in Wrath of the Lich King and finally, everywhere in Warlords of Draenor.

It’s a lot harder when you’re thinking millions and millions of characters have to save data. Each thing that can be saved to them takes up disk space and while disk space is ever so increasing, it’s not infinite, and it still causes load time errors, unlike single player games.

Yet, some AAA games could have such depth to them, like Fallout 4, which often times doesn’t even give a pacifist route. Fallout 1 & 2, along with 3 and New Vegas offered some interesting pacifist options, with only 3 requiring any in-combat deaths (various cinematics require causalities, but that’s another aspect). Fallout 4 requires many, many, many people to die for the story to finish, but – the interesting aspect in Fallout 4 is you can make some enemies flee with some of the perks.

Back to the point, that kind of depth that smaller games have now, will eventually reach larger games, but I do think it’s something to be aware of, how multiple ways to

Undertale is a game that’s like a comforting warm blanket. Puzzles that are easy to solve, but still will require you to fail a few times. A story where you can build emotional involvement with characters, whose dimensions change as you decide to get close to them, or don’t, and a variety of interesting mechanics that break the standard fight, level up, rinse, repeat, grind attitude.

It’s something that I think the industry should take seriously, beyond the indie development love it’s gotten, as an example of a way a game could be made from imagination to reality, that explores a game’s world as more than a one dimensional “there is this story and that’s the only story that can or will happen.”

There’s been a lot of talk over at GameFaqs about it, because it’s beating other games in polls, about what is and isn’t a game, which I think is an interesting discussion, but for me there is a lot of good games, none better or worse than the others as a whole, although you could easily compare various aspects against each other (such as Super Mario Bros. vs. Super Mario World), but something like Undertale isn’t memorable because of its amazing graphics, gameplay, or story, but because the entire game itself left an impressionable positive feeling.

Because at the end of the day, I play games to be happy, and happiness is paramount in the experience.