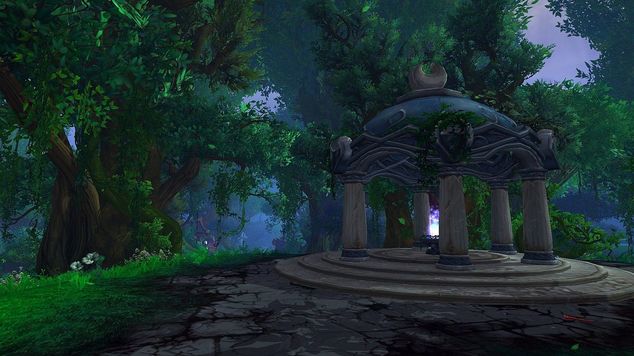 This article isn't to specifically talk poorly about WoW, I think WoW is a great game and did our industry the best it ever could by exposing the genre and making the genre more accessible. However, I have some critical points to make about the quest system, both good and bad, and I think what is good and what is bad isn't specifically up to me alone to describe, since it's subjective. I'm only highlighting my own point of view and thoughts on the matter.

One of the biggest issues with games these days is that a lot of content exists, but is ignored, because players work along the path of least resistance. In thinking about the new SWTOR expansion, it's quite possible players will forgo most of the content in the game to rush to the end. Luckily, the process fleshses out most of the story at large, but they won't experience the full monty of collecting Bantha dung and other exciting things to do in the game, which is really a shame because it also deminishes a lot of work put into the world. The same thing with WildStar which is breeming with cool things, but are mostly ignored.

I blame World of Warcraft partly for this phenomna. The issue, I believe, isn't specifically that players don't care, but it's that they're bombarded with too much, too fast, and a goal post they're racing towards. In a group you can't pause and smell the roses, because you're busy trying to keep up with everyone. "That guy" who reads quest text is the most annoying person to bring along sometimes, because you're collectively trying to level while he takes his time to read essentially micro Lord of the Rings. Which is fine, nothing wrong with him wanting to do that, but it does mess up the group dynamic. Same thing in SWTOR when someone doesn't skip the dialog and you want to pull your hair out of your head.

Likewise, Final Fantasy XIV when someone wants to watch a cutscene. You have to sit and wait for it to happen, because well, if you don't they probably won't be included in the boss fight coming up, which is lame. The frequency of needing to break to learn the story is rather high and it all, I believe, began when the story moved away from external media and into the game - in large quantities. Vanilla WoW was the first game of its kind, where you had quest, after quest, after quest, after quest. Previously, games were barren lands with few quest givers who were only there to provide mostly flavor, and some NPCs who had a few dialog options and gave directions.

With WoW, though, you had 25 quests you could fit in your quest log and hubs that would fill it full, each one with a snippet of story for your to read. Many quests contained books that you could look at, pictures to sort through, and dungeons contained book after book telling the history of not only WoW, but the Warcraft universe of itself. There was a lot of content to sort through and to be good at getting through the game quickly, you had to ignore it.

In other games, it's not about the end, it's about the journey, yet in an MMO it is really all about the end because that's when you can have the "grown up fun" of the max levels. Thus, the content falls to the side, and the urge to skip and skip and skip becomes basically a force of habit, and then you find yourself in a completely foreign world with little clue of what, why, when, and where - other than your incrediable blood thirst to take out the enemy.

The side effect of this is that the RPG element or roleplaying element sort of leaves the air. Roleplayers need a rich, in-depth background story and lots of lore to play off of and define their characters and give them rules. Roleplaying can be as little or as much sandboxy as you want it, but there reaches this really nice point where there's enough background to create a compelling story, and games like WoW provided that lore in part for that.

Of course, these days, it's all here or there, because roleplaying in MMOs in of itself isn't specifically the biggest deal anymore (considering there is so much to do in a game, that taking the time to actually emote out your actions is probably not on people's list of top priorities) and leveling is sort of at this weird point where some ask - why bother? Considering most games provide a plethora of tools to adjust your level to let everyone play together, it's becoming more and more of a question of why not make everyone equal at the start?

I think there is some interesting solutions to these problems. Skyforge is a great example, but other games like Phantasy Star Online and other action brawler type games provide dialog and story as you're moving through content. There isn't a large pause between content to take in the story, instead, it's provided as you move from point A to point B through dialog. Skyforge has a few cutscene moments, but these are fast and furious. Providing dialog, depth, and story during gameplay probably is the smartest approach, instead of giving everyone tomes to read over.

Yet, I think, many players probably don't even care even then, and that's alright. There is a reason we use the term "MMO" instead of "MMORPG" for like since, forever ago, because the RPG element isn't nowhere near as important these days as before - for good reason. The technology to make a compelling game is much, much, much stronger now than before, so we're not left with a game with a few combat mechanics and we have to use our imagination for everything - that work is done for us.

I figured I'd just share my opinion on this and again, it's subjective. Some really value the roleplaying elements, even beyond the emote RP server type stuff, while others probably could care less, and plenty in-between.