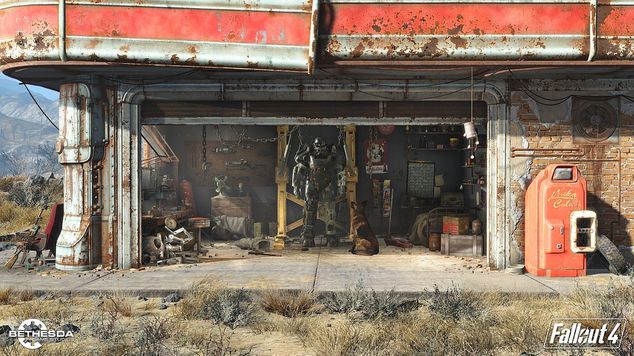 I Would Still Love a Fallout MMO
Xerin takes off once again talking about his wishes and dreams, this time about how he wishes still for a Fallo

I'll make this statement loud and clear - I think a Fallout MMO would be tops. I'd love to venture into the world of Fallout and have a go at surviving the world with a group of friends. I think if anything, Fallout is one of the few single player IPs that have almost everything an MMO needs baked in. You have an entire world of lore and ever so many unexplored locations. You have an in-depth RPG system involving skills and character creation, along with loot. You have an entire backstory that would make perfect sense for an MMO: a vault with thousands of Humans who were put in cryosleep is waking everyone up at a designated time, and it's time to retake the wilderness.

Even better is the ability to have a proper tri-faction game. In the tutorial, you could easily have the fault dweller choose between the Brotherhood of Steel, New California Republic (or any religion, regional government, or even the raiders), and the Enclave. The only quasi requirement would be Enclave and BoS would have to be primary factions, since they're universally at odds throughout the entire series.

There is so many various timelines and ways to do it. Auto Assault/SWTOR style, have everyone work together and against each other, or just pure ESO/DAoC/WildStar and have different stories based on which factions you choose. Whatever it may be, Fallout is perfect. The classes are baked in, healers and damage and tanks could work Firefall which armor suit you have equipped or just by which skills you have or even TESO style where your class is just which set of perks you start with.

We look at a lot of games that are post-nuclear and a lot of times they miss the mark. I'm not calling any specific games out here, I'm just calling out the genre. It's hard to take the genre and make something compelling with a game. Fallout is successful because it balances the "go f yourself" horror with vast sprawling civilizations held up on a shoestring.

You're not ever alone in Fallout, between companions and sprawling cities, there is always something somewhere for you. It's a great staple of lore and I think would make for a great place to play around with friends, even if it wasn't massively multiplayer, doing it Borderlands style would be rather awesome.

Now, this of course discards the fact that there was going to be a Fallout MMO but it was discarded when Interplay (the original studio behind Fallout) was going to make an MMO and Bethseda disagreed with them, settling out of court and the Fallout MMO was scraped. Project V13 was supposed to be the Fallout MMO just without Fallout, then it was supposed to be a RPG, and then it sort of faded into nowhere. I can't find any trace or mention of Black Isle in 2015. There are some alternate Fallout MMOs out there that are... interesting and probably not very legal, but are focused on 1 & 2 and I'm talking about 3 & 4, but just to put it out there: I loved 1 & 2 for what they were as well, just not what I'm thinking about right now.

Fallout 4 is a great announcement and I'm excited for it, however, I still would love to see a Fallout MMO. Then again, I'm sure people would love a Dishonored MMO, but I feel as if BattleCry is going to take that role.

Never the less, I'd love to see a Fallout MMO and I hope Bethseda at least gives us multiplayer at some point. It'd be rather neat! Or throw Interplay a bone and let them bring us the MMO they always wanted to.

To read the latest guides, news, and features you can visit our Fallout Online Game Page.