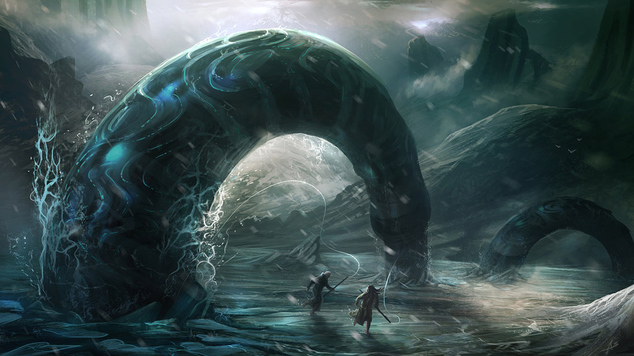 I have decided to interrupt your regularly scheduled seasonal broadcasting to bring you something curious, interesting, and potentially frightening.

If you follow my column here regularly, you’re probably used to my natural attraction to game design and game theory topics. I frequently use this space to break down games and analyze everything about them, from art and flavour to systems and mechanics; no topic is off the table – no matter how heavy it might be. For this installment, I’m going to be talking about how developer innovation in systems design can dramatically improve immersion and make a game unique and even iconic.

Over the past year I’ve been closely following the development and design of Revival, an upcoming sandbox-styled MMORPG themed in a Lovecraft/Howard inspired dark-fantasy world. The game itself is still under development and likely has a full year or two before the majority of intended gameplay systems are coded and implemented, but the systems design alone continues to intrigue me.

In the developer’s latest blog, the dove into some of the systems design and intended feel of their fishing mechanics which, terrible pun fully intended, really hooked me.

We all know how this works.

Somewhere amidst all the grinding for levels and gearing up for end/late-game content, players occasionally get a chance to participate in MMORPG fishing. Sometimes it has its own mini-game, sometimes it has its own unique skill-tree; but usually it’s unfortunately just an afterthought that most players are forced to pick up momentarily to complete an occasional quest requirement.

To put it plainly, fishing in the average MMORPG is boring.

It is as boring, in fact, as fishing in real life probably seems to someone who isn’t a fisherman. For those who have experienced fishing in real life, they are well aware of the challenge – not just in trying to find the right location to fish, but also in using the right tools and techniques to be even mildly successful... let alone a master of the craft.

Fishing is a very unique and interesting skill in real life, and the generic brushing most MMORPGs give it only goes to show how little fishing knowledge the designers had when they created those systems – or, even better, how ridiculously disconnected that system is for their particular game. After all, why spend so much time and effort on a system that is essentially a flavour bolt-on intended only to help the world feel more life-like?

Fishing in MMORPGs isn’t essential to overall gameplay; and why should it be when the goal of most of these games is to level up, power up, and go bash in the skull of the latest and greatest baddy you’ve been directed to fight?

I’ll save you all the nuances detailed in Revival’s latest developer blog and cut to the chase on this one.

In Revival, fishing won’t be a bolted add-on system with no depth or no real connection to the other game systems. Like the rest of Revival’s design, each and every system (no matter how insignificant we’re used to them normally being) will serve a unique and impactful purpose in the world of Theleston.

When it comes to fishing, it won’t simply be a side-element to the core game; but rather, it will be tied directly to many of the games other systems. More importantly than all of that, the intended systems and mechanics involved will actually help enhance the look, feel, and theme that Revival is trying to achieve as an immersive role-playing experience true to the genre’s table-top and MUD roots.

Fishing in Revival will play an important role, as the fish themselves will be utilized for more than mere sustenance.

Fish in Revival will be used in various other skills, like cooking, alchemy, inking, and several others. In addition to that, fishing will require basic knowledge of outside skills to accomplish efficiently (for example, you’ll have to have basic butchering and jewelcrafting skills to prepare your own bait and lures respectively). More intriguing than any of that though, is that fish in Revival will live and grow and create narrative and tagging implications in the future.

A fish that continually slips hooks, breaks lines, and breaks poles will start to gain attributes, size, power, and potentially even a unique name and local legend of its own. These differences allow for players to secure unique achievements for “catching the big one”, and not just a little badge that glows in your achievement window.

I won’t delve to deeply here, as I’ve talked about it at length in past columns, but Revival’s unique back-end tagging system allows for unique tags to be created and “unlocked, learned, or otherwise acquired” by players that directly influence your interactions with NPCs, Factions, and can dramatically determine what content is available to any given player. A character’s set of tags, their karma status, and their standing with various factions and organizations in Revival will guide the dynamic NPC and Environment of Revival to custom-tailor the entire experience as both a consequence and reward for all of your past decisions and actions.

What you accomplish while fishing will be a part of that major game system – directly fused to the core elements of the game, just like any other “small” game system. 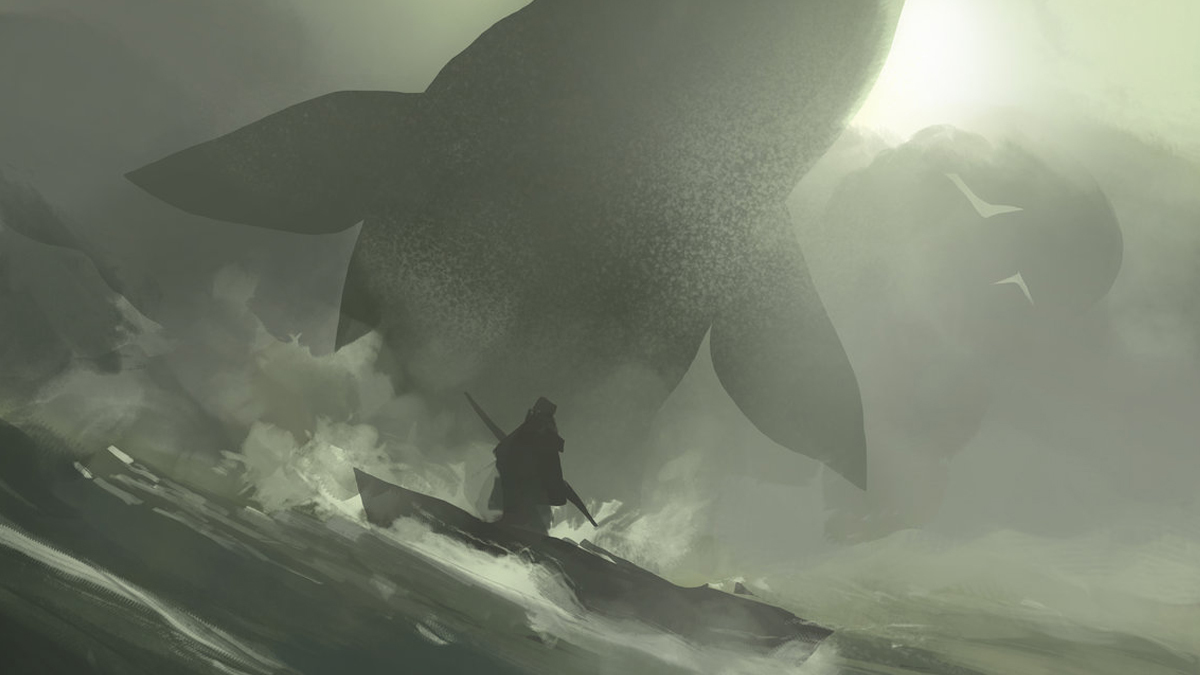 Whew, we’ve talked about all of that and I haven’t even gotten to touch on commercial fishing and whaling operations (on some of Theleston’s high-seas!).

In short whaling provides a large-scale version of fishing that is separate (but similar) to small-scale fishing, granted it will also require the use of larger game systems like open-world travel, boating, combat, and probably plenty of smaller skills and professions to help support the whole operation.

The important bit I want to get at with whaling is the danger involved in the trade, both from retaliation by unnaturally intelligent and potentially alien-like sea creatures, as well as competition from other sea-faring fishers and the constant threat of piracy.

All in all, fishing in Revival, whether at the smallest scale or largest, offers tons of engaging promise for any potential player. The rewards can be small, or massive, no matter what realm of the trade and profession you’re participating in. Fishing serves several purposes as being an entertaining diversion for some, as well as a full-time legitimate profession for those who really want to dive into the game’s deep systems (you can find more details about whaling in a much older developer blog).

What It All Means

Coming around full-circle, the important distinction between what other MMORPGs typically do with fishing and what Revival intends to do, is that the deep innovation and inclusion of this normally insignificant system should make fishing a very impactful experience in the world.

This does several things.

First, it obviously makes fishing a more attractive endeavour for players to participate in (casually or for true mastery). Second, the impact means that the rest of the game will notice fishing as a very important piece to the economic and narrative puzzle. It’s almost difficult to imagine that I could write that last line; fishing can and will alter the story of Revival. Crazy, right? Additionally everything about fishing and whaling will continue to add to the mystery, allure, and potential horror of Revival.

For those familiar with the works and writing of HP Lovecraft, they are aware how often the man utilized the mystery and danger of the unexplored and unknown to help establish a sense of fear, awe, and horror in all of his writing. Few things in our world hold more mystery, danger, and fear than water. Just like being afraid of the dark, some people are afraid of swimming in deep water; and many can’t even swim at all. Why? Water is a dangerous element on its own, nevermind all the haunts and dangerous creatures that lurk within it.

For Revival, innovating and enhancing what fishing has been in the past, greatly improves the immersion of a player going about their life in Theleston. The extra effort taken, attention to detail, and consideration of fishing as a true, integral system of Revival promises a unique experience that few (if any) other games offer – especially MMORPGs.

There is a great deal that the gaming industry can learn from what Revival developers and the devs of other smaller game studios are doing. Innovation may not promise wide accessibility to an upcoming game, but it does usually provide something unique.

In the highly-accessible, flooded game market of today, it will be unique and compelling game experiences that get noticed – and with massive the game industry is today, getting noticed is probably half the battle.

Not only does a unique experience offer the huge benefit of word-of-mouth shares on social media for being something cool and different, but as I detailed above a few comprehensive innovations can actually greatly improve a game’s sense of immersion. For any game in the “Role-Playing” genre, immersion is king and can often sink or swim a game in this flooded market, all on its own.

Never underestimate the power of immersion for an MMORPG.

[ Special shout-out to artists Alyn Spiller and Steve Hamilton for the artwork included in this column! Click their names to jump over to their Deviantart pages and see more of their awesome artwork! ]