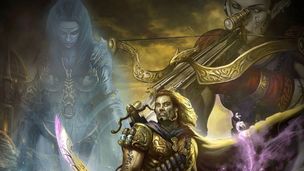 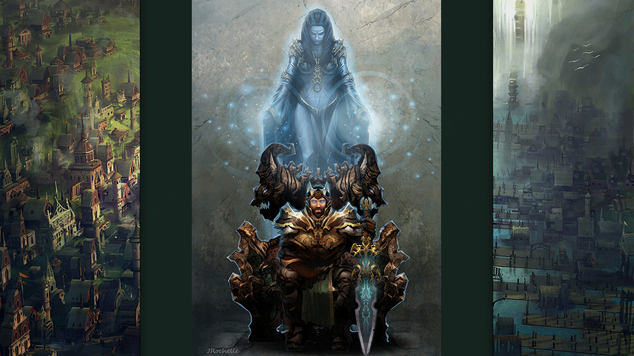 Insight on Pantheon's Redemption
Veluux goes into depth on Pantheon: Rise of the Fallen, why it's a mess right now, but also... why it still has

I suppose I should do a better job of informing readers that this article is my third installment in a miniseries I've titled: Insight. While it isn't mandatory to read the primer or first two installments beforehand, if you value context and continuity it will be worth your time to check those out. You can always read through this first and see if this series interests you. Either way here are the links to the other installments so far:

That brings us to today where we're going to talk about an upcoming title that has a bit of murk and stink about it. This one has entirely different circumstances polluting the process than EverQuest Next does, but part of me thinks that this game's issues are equally dangerous - if not more so. Still, it is attempting to buck the trends of a stagnant genre, but rather with backward innovation instead of forward evolution.

That alone is an interesting concept by itself. Lots of titles out there (particularly indie titles - but not all) are exploring retro graphics to reduce development costs, and many of these have resonated well with players. I won't tell you how much time I've spent playing Hammerwatch - which is a very fun co-op dungeon game that utilizes 16-bit style graphics; but I digress.

While I readily admit I haven't spent too much time following Pantheon's early development, my experience with that game got a recent (and much needed) boost last week when some colleagues and I had Creative & Audio Director Chris Perkins on our weekly TheoryForge Friday livecast. It was a good show which added a lot of insight into what they're doing with the game. However, it was the post-show discussion that really illuminated some of the deeper issues with MMO branding and marketing that developers today are facing. I won't openly discuss what we talked about behind closed doors, but I think that discussion really resonated with all parties.

Pantheon faces a couple of interesting obstacles right now. First off, their choice of backwards innovation, as I mentioned earlier - isn't the most popular concept in the average gamer's mind. After all, if the older mechanics of Ultima Online and the Original EverQuest were still features that were in demand - wouldn't there be a lot of people still playing those games?

To answer my own question: No.

Not Quite What It Seems

The thing is, those games have evolved in ways that have fundamentally changed their core gameplay. The real drawback to that early model is that it relies too heavily on developer-created content. The race to keep content ahead of players never allowed the teams on those games to give the graphics the TLC they sorely still need. If they had been modeled a little differently, with more procedural and randomized content, that might have given developers more time to focus on keeping the game current. Though I don't think anyone knew how long people would be playing these games. How awesome and incredible those games were in their early forms is what really kept people coming back.

EverQuest was an epic game - initially, and with its first few major expansions. I really consider the planes expansions to have been the first squared shot of the wrecking ball on that game's overall experience. There were just so many things that expansion added that really shrunk the world and killed a lot of the "fun" factor. Of course, it wasn't immediately apparent, and first playing through the planes was quite entertaining. Somehow though, the "replay" value dropped significantly at that point.

To this day I still haven't really sat down to dig and think about it, but that's mostly because I still want to remember that game fondly. It was my first MMO, and like any real relationship I'd rather not remember how it broke my heart and just hang on to the good memories. I've gotten a bit off track, but the point is, these games were fundamentally great; for a while anyways.

Pantheon is determined to recapture that initial good and re-imagine it.

Believe it or not, they're actually not the only ones doing this. Just look at all the hype around the new Jurassic World movie, or how well Marvel's Iron Man trilogy did. The Iron Man movies in particular took a huge factual departure from the comics - but that didn't really matter. They captured the core of what Iron Man and Tony Stark were really illustrating and they successfully embedded those things in our modern setting that made the character relatable once more to a new audience.

Pantheon of course is in a slightly different boat, trying to capture the amazing elements of UO and EQ and inject them into the modern MMO genre and resuscitate it, but the principle is the same. 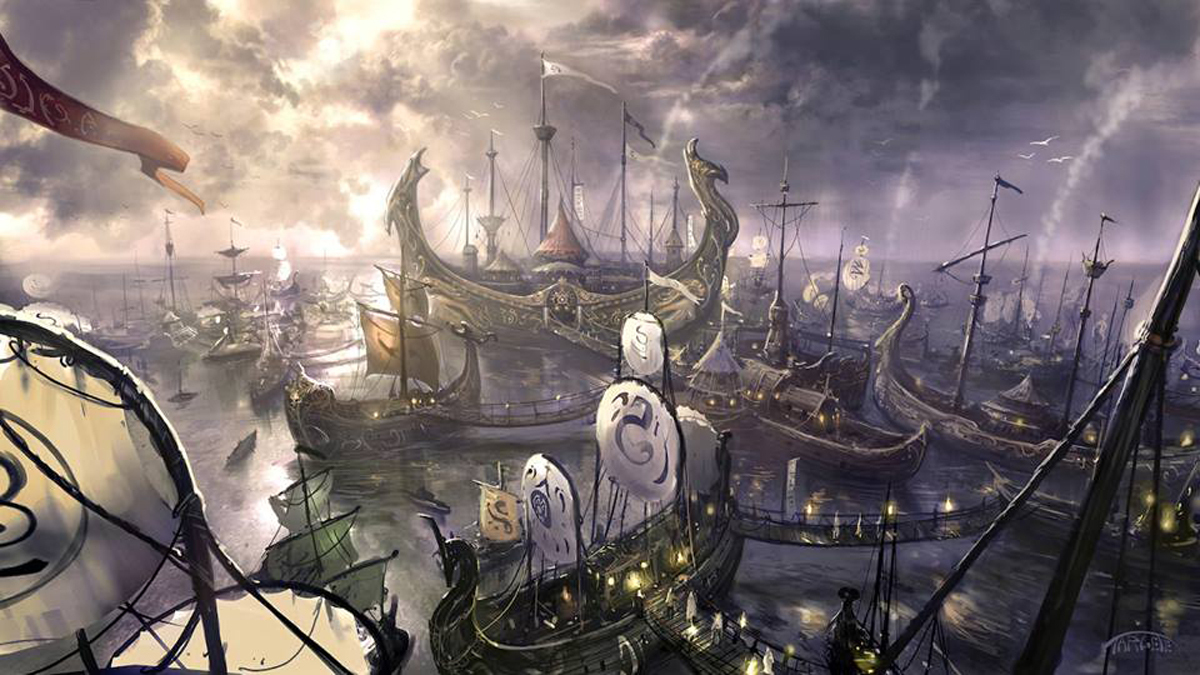 Off To A Bad Start

Unfortunately Visionary Realms got off to a poor start. Their initial branding and marketing campaign turned out to be quite polarizing for players in the genre. Unlike Iron Man having Marvel's great lineage and fanbase to back it up when that Studio was attached to the title, Pantheon making Brad McQuaid synonymous with their title aroused a mixed reaction.

This is just an armchair speculation, but personally, I feel like there are far too many players still bent out of shape over what happened with SOE titles and a big core audience from Vanguard that was extremely disappointed. It's tough as a player, sitting on the outside, to not look at some of those significant past wounds and be willing to open up and trust again. Even worse, the method they chose to crowd-fund the game in Kickstarter was extremely risky.

Kickstarter does not promise a product, nor does it offer backers any type of guarantee that a product will come out as originally advertised (or at all). When you pair something like that with McQuaid's shaky reputation (legitimate or not) as your headline backing behind your product, it's a recipe for disaster. I'm actually incredibly impressed and surprised that they were able to get half of their $800,000 goal pledged.

That is a lot of money; which is another part of the problem. The reality is that MMOs, especially AAA-quality MMOs are insanely expensive to create. To ask for such a huge commitment from fans and players so early in the process is just too much. That's a big and completely game-unrelated part why I believe their Kickstarter fell so dramatically short of meeting its goals.

Then, when you look at how well Crowfall's KS campaign went, you really start to wonder about the whole process and what else went wrong. Was it just a matter of not having the critical mass needed during the window of the campaign... or is there more about Pantheon to be concerned about? Brad McQuaid worries aside, I honestly feel like the game - at least the game we've been given descriptions of so far, isn't quite as fully fleshed out as it needs to be.

That's the key difference, I think.

Crowfall very much has the concept of its game defined, and although it will continue to change and evolve through development, most of the core systems and game-play have been thoroughly designed and redesigned conceptually to the point that they feel very solid. I don't know if I can say the same about Pantheon at this point. While that's certainly no knock on the game's potential, if they do have solidified plans and concepts, they need to do a much better job of conveying them.

Why This Game is a Dark-Horse

All that being said, I'm still keeping a watchful eye on this game. From what I know about Visionary Realms, and after our long post-show chat with Chris Perkins - I feel like this game has tons of excellent plans, potential, and ideas. The problem for them is getting past all of the negative impressions created by early branding and marketing choices that, in retrospect, weren't the right ones. The studio needs to find a way to repackage their game, and they need to make sure it feels much more solid and tangible than it did the first time they revealed their plans.

I think if they lay low for a while and get some of the legwork done so that this game can truly shine for what it is, they'll have a much better chance the next time they come around to market.

Hopefully, they'll avoid the temptation of small, early returns by screwing around with early-access. It's a terrible trend that almost every new MMO has been exploring. I feel like these games, specifically MMORPGs, are best served by keeping a much tighter lid on themselves prior to official release. Because of past failures, Pantheon really has to avoid early access and bad PR if it ever hopes to gain some kind of critical mass prior to official release.

There are MMOs out there who have had similar problems and done well to right themselves. Firefall and FFXIV are two MMOs I've personally played that I believe did an excellent job of realizing their mistakes, going back to the drawing board and getting things right the second time around.

The real win for Pantheon? If it can achieve the same kind of successful public reboot that Firefall and FFXIV did; I think Pantheon RotF offers a type of gameplay experience that very few other games on the market offer. There is an audience ready to pick up a re-imagined "old school" kind of game, and I believe it's bigger than most people realize.

We'll talk about that more in tomorrow's Gravity Well: Insight installment with Sage of Lucimia.