World of Tanks Preview - An F2P Tankstravaganza!
<p class="MsoNormal">When it comes to Tank battles, only a few games have taken a remotely realistic view of
Column
World of Tanks 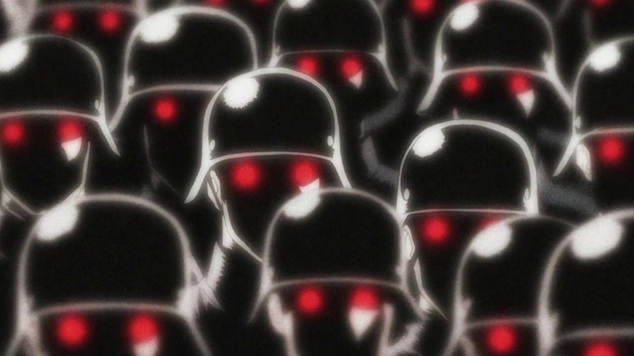 Is Twitch the Final Frontier for In-Game Advertising?

There have been a number of attempts to integrate advertising into online games over the years. Back when free-to-play was still considered a dirty word by core gamers, a handful of MMOs and multiplayer titles would inject advertising into game clients in different ways.

Since that time, in-game advertising (IGA) has blossomed into a much larger entity. If you can believe the numbers listed in Wikipedia, it is currently claimed that:

Of course, if you follow the paper trail of where those numbers come from, it leads you to a source article that discusses that $699 million USD as relating to video advertising – not IGAs in video games. Who would have guessed that there is misinformation on such a venerable source of truth and factual evidence as Wikipedia?

As GI Joe used to remind us at the end of every episode, knowing is half the battle.

The Rise of External Advertisers in MMOGs

Originally, one of the most common methods of injecting IGA was to utilize billboards or other forms of signage which helped lessen the impact the in-game ads would have on immersion and the overall user experience. Product placement has also been a big thing in certain titles and franchises.

A few of the more notable examples of IGA in virtual worlds include:

EverQuest II: Would could forget the best IGA of all time? A simple in-game prompt of /pizza would allow players to place orders with Pizza Hut. 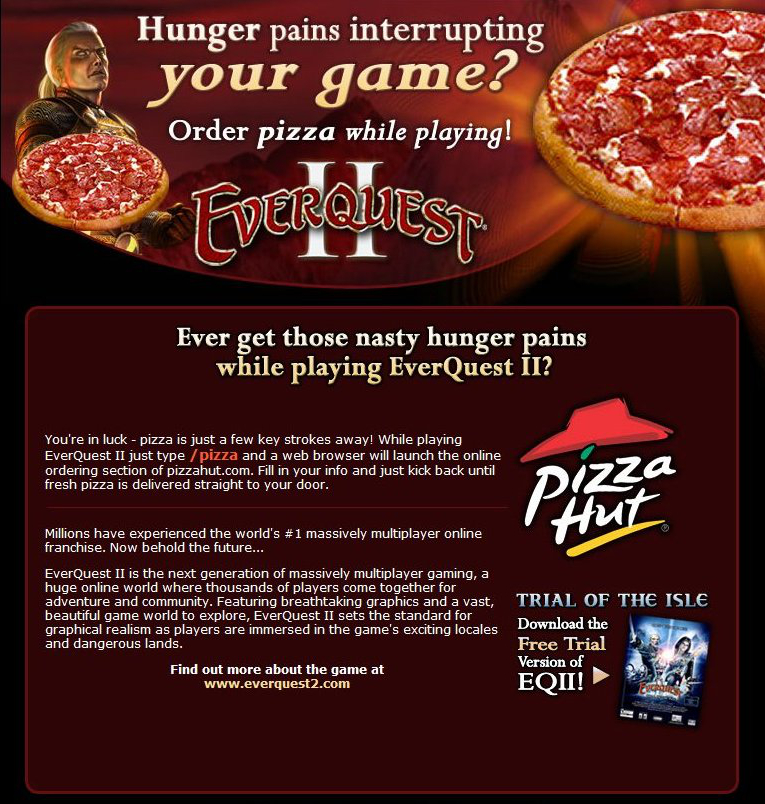 City of Heroes and Anarchy Online: Both of these titles dabbled in the usage of IGAs on billboards and other in-game signage.

The Impact of Free-to-Play on IGA 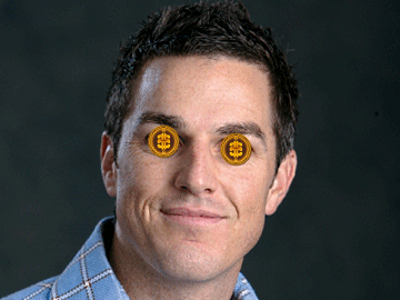 Since the free-to-play business model has become the norm for the industry, external sources of IGA have diminished by a fair amount. Instead, we’re now commonly prompted by the UI to open up the in-game marketplace and spend cash on virtual goods that directly help fund the development of the game.

These prompts run the gambit from the subtle occasional reminder that there are things you can spend cash on through the UI, on up to the obnoxious over-injection of buttons and reminders in the core UI to open the marketplace at all turns.

A subtle version of this is found in Guild Wars 2 when you use the shortcut “O” to bring up the Black Lion Trading Company window. Even if your intent is to browse through or list items in the auction house, the default display will bring up the marketplace tab.

On the more intrusive end of the spectrum, Star Wars: The Old Republic goes out of its way to remind you to spend cash at every turn in the road. Even as a paid subscriber, you can’t escape the ever-present glow of the Cartel Coin logo.

Twitch.Tv – The New Breed of IGA

Much like the advent of in-game social media spamming mechanics before it, the rise of livestreaming has become the newest assumed win / win for IGA.

In the latest press release from Wargaming, it announced the launch of the officially supported WG mod which allows players to stream “with one simple click”. From the official release:

Wargaming today announced the launch of the Wargaming supported WG mod, allowing players to broadcast their gameplay from the World of Tanks and World of Warplanes clients directly to their channel on Twitch, the world’s leading video platform and community for gamers. Now the intense online battles of Wargaming’s PC titles can be streamed from desktop to Twitch viewers with one simple click.

The reason why this is considered a win / win is pretty simple.

The official press release goes on to proclaim that this has already proven to be successful:

Since the launch of WG Stream, the total number of broadcasts on World of Tanks and World of Warplanes channels on Twitch has doubled, while the number of spectators watching those has increased by 18%.

The Future of In-Game Advertising

Is Twitch the Final Frontier of in-game advertising? It most certainly won’t be, but in the meantime it’s hard to ignore the growing impact of Twitch on our gaming lives. Part of why Twitch is so popular is that smart streamers have figured out how to make buckets of cash and turn their favorite pastime into a legitimate full time job.

If you recall those numbers from the start of this article, that $699 million USD figure refers directly to video advertising which is where all the money in web advertising is these days. The box and banner ads that sites like ours use to stay afloat have seen increasingly diminishing returns due in large part to a combination of instant access to Ad-Blocker via browser extensions, YouTube, and Twitch.

In-game advertising won’t be going away anytime soon, even though it remains to be seen what will be the next thing marketed directly to online gamers. I wouldn’t be shocked if we reach a point where using second screen support from an AT&T device prompts an in-game overlay to consider switching to Sprint. Or if Apple urges you to take a bite out of an iPad instead of that Android device you’re currently using.

In the meantime, all hail the ability to provide free marketing for games publishers with the simple click of an in-game button.

World of Tanks Preview - An F2P Tankstravaganza!
<p class="MsoNormal">When it comes to Tank battles, only a few games have taken a remotely realistic view of