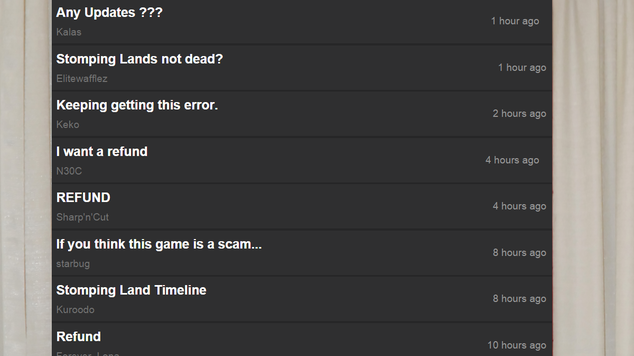 Kickstarter - The Land of Glorious Vaporware and Disappointment

I just hate early access and I hate Kickstarter for video games. It’s just not good. It’s not good at all. Just recently, Stomping Land got pulled from Steam for being vaporware. The developers apparently had the audacity to just take money and not do anything. Proving yet again that early access and Kickstarter are terrible ideas for monetizing video games.

Quick disclaimer: people can do whatever they want with their money. If you want to buy land in a desert for $55 an acre and try to build a house on land with no water table, by all means please do. This is my personal blog of sorts to talk and analyze things going on in the industry, it’s not a call to action, but an informative piece explaining how I feel on things. Please - if you want to spend your money - do so as you wish. You have the right. Additionally, who knows, "The Stomping Land" could very well be in development still and not be vaporware, there isn't a definitive yes or not as well, but I am assuming like many in the community that it is.

Sure there are success stories, success stories of people that are in what I consider an abusive relationship. Customers become investors and when you invest you build an emotional relationship with something. For instance, you invest into your phone. You take your liquid capital and transmute it into this digital box you can hold into your hand that is worth supposedly as much fiat currency as you put into it.

So what do we do? We buy cases for it. We care about it. We build a bond with it. Because at the end of the day, we work for that money, we take our services and our labor and turn that into fiat currency and with that fiat currency we invest it into material goods. So, ultimately, that Nintendo DS you hold in your hands is in reality an extension of your labor efforts. That’s why we build such a strong emotional bond to material goods. 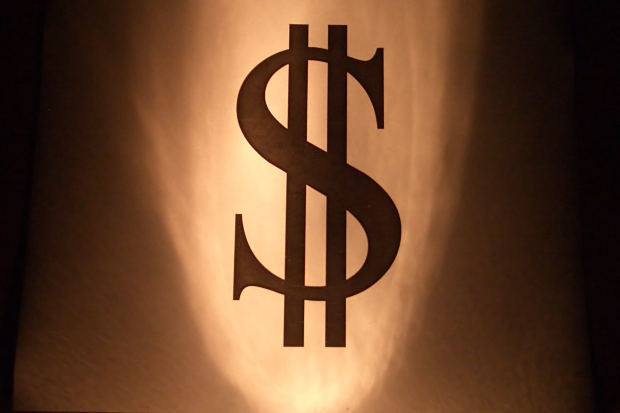 This isn’t some post-scarcity Star Trek economy, we work, and we earn, and we buy things and we take care of them because those things represent us. So when we take money and put it into vaporware we’re ultimately investing into something we have no control over. Investors in major corporations are often given a voice, or a vote, representative of their shares as dictated by the bylaws and laws of the country the corporation is formed in and being traded in.

This is how it works, I take $24.99 and I buy “The Stomping Land.” I receive the game, unfinished, with promises of it being finished in the future but as of right now they need additional funding to make it happen. So at this point, I’m invested, I have my liquid assets poured directly into this game, and now I want it to succeed.

As I talk often about the Cult of Star Citizen, what happens next can either be excitement as your game of choice takes off or a cycle of distrust and false belief as it staggers along. For games like Star Citizen and many other Kickstarted / Early-Access games, they provide little pieces of cookie crumbs to the backers to string them along, while the backers feel pressured to invest more to make sure their earlier investment pays off. As the updates continue, even if it's monthly and just a few small things happening, the community will work out a way to assume the best possible scenario.

That also transitions into free labor for games. Backers are often the viral force behind a successful campaign. So after they invest their money into the game, they now hold an interest in the success of whatever campaign it is, and thus will reinforce / talk it up, hoping to string in other “investors” to back the game.

Then something like “The Stomping Land” happens and brings us all back to the harsh reality. These developers are under no obligation to provide a game. They have no liability. “Backers” aren’t some protected group that has some insurance against failure and have little to no legal rights to go after the developers, because either there is no contractual obligation to provide a game as written in the terms of the payment and/or it would cost more than you could get back through legal action.

Kickstarter has made some policy moves to make sure creators are held accountable and outlines that they are legally obligated to produce the rewards or issue a refund. They even make sure before you launch your project that you HAVE to understand these rules and responsibilities. However, and here is the joke of it all, a game developer can produce a giant steamer and hand it to you and they’ve completed their legal obligation. The reward is a game as described, with heavy disclaimers that depending on funding is what they can produce. Not a game you like.

So, what we have, is Steam pulling the game from the listing and haphazardly issuing refunds as it sees fit. Those who went through Kickstarter have to contact their banks and hope that the purchase is still within their ambiguous “purchase protection” range. The backers get to sit around and feel terrible that they talked up something that the Internet is unanimously calling a failure, the true believers holding out for maybe an update at some point, the developer decided Steam was beneath them or something to that affect, but ultimately in the end, much like many of the Kickstarted games, there is no obligation for them to produce anything - the community can hopefully get their refunds and maybe some state out there will take up legal action for the unfulfilled physical rewards, but at the end of the day the community loses.

A brief aside: The biggest issue here isn't necessarily the developers keeping mum and the forum moderators working without any development contact or the community outrage. It, at its very core, is the fact that a developer is responsible for keeping its community informed of ongoing development and they did fail. So while the game may continue development and this could be a hiccup, there is still something to be said about the total lack of contact and the emotions/anxiety it causes its backers.

This is the big issue again with early access. If a game launches then there is all this press and buzz about if it’s good or not. Good games get glowing reviews and people talk it up about how awesome it is to play. You can head over to your friends house and even try it out or play it at your local department store.

If it’s bad, well, you’ll know in this modern age. Oh, you’ll know. You can make an informed buying decision. The game is quantifiable and material, it exists, and once you purchase it, it is now yours. Yet, in the horror that is Kickstarter / Early Access, you’re not buying something material. You’re buying a promise.

Ouya for instance, was a great idea, and people bought into it like crazy. It was the console killer! Then, Chromecast came out and a bazillion other Android HDMI sticks, some before Ouya even launched, and made the price point the Ouya held to be not ideal. So the backers, who bought into this “social movement” against the big 3, turned into just a bad purchase.

Now of course, Ouya, the third largest campaign in Kickstarter’s history, is looking for a buyer of its talent, not necessarily the actual console. The unit obviously wasn’t a sustainable business, there isn’t any market for the console anymore, and they’re all collecting dust over at Target now. Due to the fact that an Amazon Fire TV is better than an Ouya on all accounts and Chromecast can be bought for pocket change. 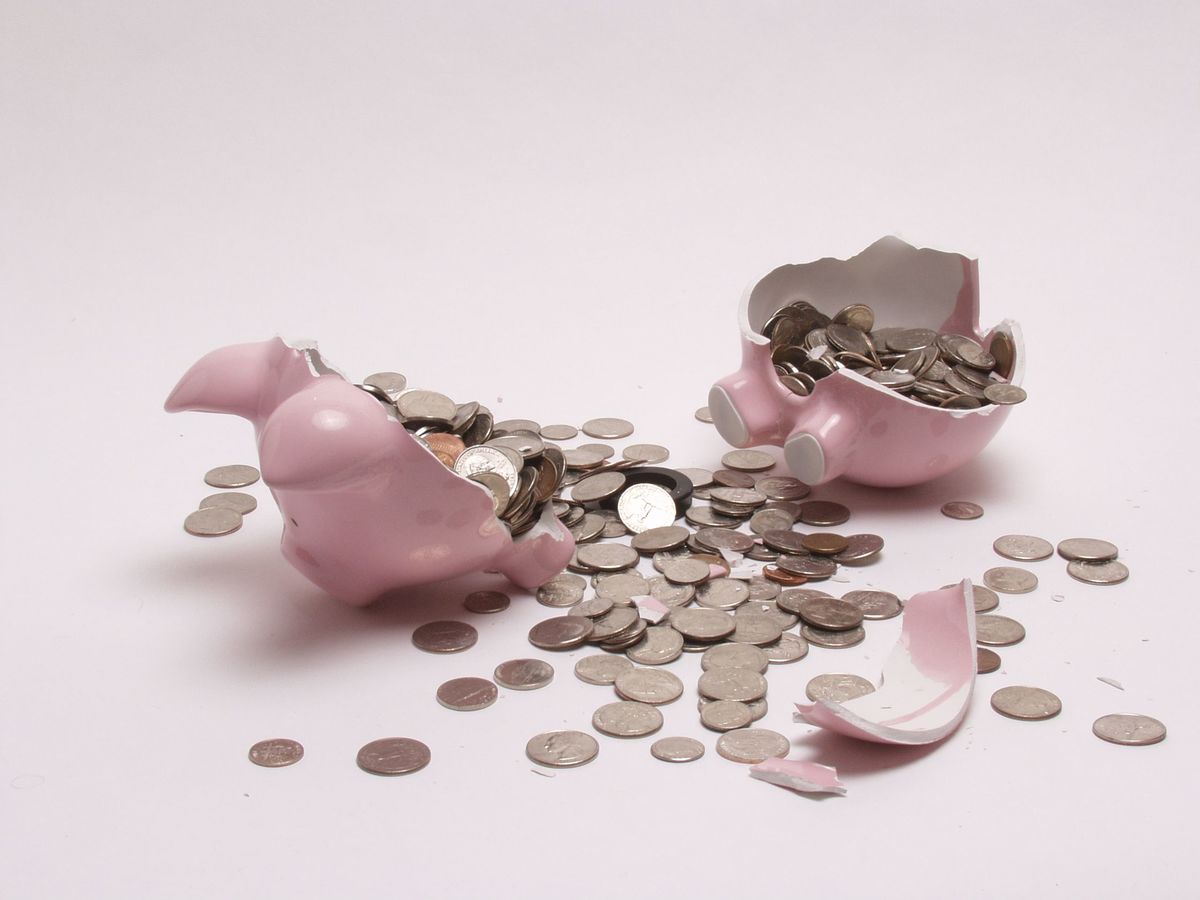 Quick aside - if ya didn’t know, you can play games on a Chromecast. You can also stream from your tablet or phone to the T.V. so you can play your phone games on the big screen. You could just VNC into your computer and play games on your PC on your T.V. (not recommended due to lag but meh).

So yeah that leaves us with a simple conclusion. Games don’t belong in the crowdfunding sphere until a solution arises in which there is a way to protect the consumer from developers who take the money and flee. There needs to be a medium that can promise delivery of a game. I don’t want to give away too many free ideas here, but a simple escrow service that releases funds as a game hits milestones, and if there is a default by the developer on the promised milestones, refunds can be issued from the pool of money remaining, providing some barrier between good intention of the contributors and responsibility of the developer, instead of handing out these huge lump sum payments and then allowing them to sell what usually is effectively a tech demo with years of development in front of it that staggers along and slows down after the sales start to slow from the early access period.

I encourage anyone who wants to invest into a game to do research and remember - you DO NOT HAVE TO BUY THE GAME IN EARLY ACCESS. You can wait until it releases to get it. It’s not a Black Friday sale, you will have a chance to buy it at a later time, and the “sale” price on the Kickstarter isn’t even going to touch the depths of a steam sale.

Have a great weekend everyone.