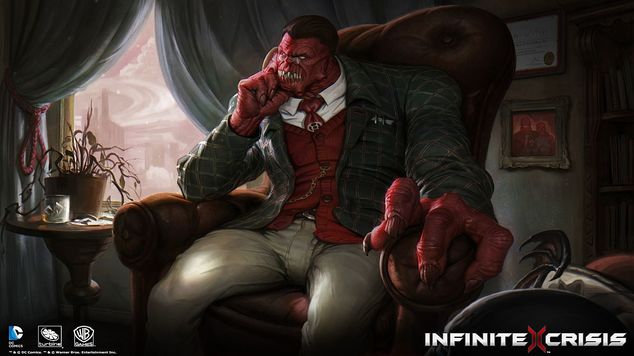 Infinite Crisis will sunset later this year. I want to take a minute to just reflect on the death of the MOBA industry and the arise of the shooter. MOBAs are done and gone with it, they will continue to launch day after day for awhile as development cycles continue to churn, but there will not be any more room to break the trinity of League, DoTA, and Heroes of the Storm, not until MOBAs reinvent themselves down the line and League of Legends is considered a game like Everquest (the first one) is now, an old memory of great times, but beyond its age.

I don't include SMITE, because it's an team based arena brawler, the future of MOBAs. Players realize they no longer have to be confined to the isometric view, much like players who realized that they no longer had to play games like Ultima Online, Ragnarok Online or Lineage when games like Lineage 2 and World of Warcraft arrived with nicer graphics. Arena brawlers are pretty much the future and companies have been trying to strike the iron early rather than later.

Let me put my theory of game desire out here - you will and can disagree with me, I have no capacity to say that this is everything to it or it's even true, it's just true as I have observed it, and I have done a lot of observing. Let's go back to early 2000.

In 2000, the biggest online multiplayer games were all shooters. Quake, Unreal Tournament, and games like Shogo were what you played when you played games online. This, much like a bolognese sauce, kept boiling and concentrating, until a trinity was formed: Halo, Call of Duty, and Battlefield 3. With two mainliners (CoD - League, BF3 - DoTA) and one outlier (Halo - Heroes of the Storm) (these aren't exact comparisons, switch DoTA and League around if you want). The other shooters were delegated to go and die and have their engines scrapped to become new games.

MMOs then showed up around 2005 with the expanse of WoW and they became the new predominante thing that people wanted to play online. The reason being is that unlike a shooter, your character is saved. It transfers from play session to another. Accomplishments stick to you and you can wear them like a badge of honor. Where being a high level in Halo just made people want to shoot you more so they could insult your heritage, being a high level in WoW just resulted in admiration.

This continued until so many MMOs were made that it once again boiled down to just a few that were the headliners - WoW, SWTOR, Elder Scrolls, FFXIV, WildStar, etc. (there are many more on this list like Rift that are still very successful and TERA). In the growing phase there were new MMOs almost every week, but now they're a big more spread out, as there is only so much room for people's attention online to a specific genre.

Then came MOBAs which are the hit new cool thing to play, which came from a plethora of maps on Warcraft III that were based on the most popular version - Defense of the Ancients. DotA 2 eventually followed, and then Heroes of the Storm but in between there games like Infinite Crisis came and now they've went.

Of course, with MOBAs there isn't persistence. We've boiled back down to effectively to Diablo II levels of character loyalty, where when the ladder reset you make again.

On the horizon, we're seeing a building surge for the cycle to return to the FPS shooter, but with some new modern caveats. You're getting RPG elements like skills and MOBA focus on just a few very powerful skills used in rotating frequency and detailed combination. Games like Gigantic and Overwatch are the headliners, but there is a plethora other titles like BattleCry as well. They're the next thing that's going to be the new thing everyone plays.

Which will then move back into the need for persistence and prestige as players continue to be discouraged, once again, with each match not bringing forth anything but achievements and levels. Persistence will return, in a new form, just like shooters have, but then people will get tired of all the grind that comes up with persistence (leveling up, gearing up, raiding, etc.) and we'll see the return to raw PvP gameplay like MOBAs.

Anyway, Infinite Crisis is a victim not of bad gameplay, bad game design, or anything else, it's a victim of a limited attention span in a market that constantly shifts between the desire between persistence and gameplay. Between owning something and pwning others. There isn't room in the marketplace for a game unless it can drastically rewrite the formula, but with current technology and the current landscape, making something that's twice as fun as what is out there is a challenge many aren't willing to undertake. Being a good game doesn't mean you'll be a successful game, if there are better games out there for players to play.

I'm sad with the closure of Infinite Crisis and I do believe the game could have been something, had it released earlier to a crowd that wasn't locked into their favorites yet, but that is the way of life and we will most likely see a future purge of many, many MOBAs that just weren't meant to be as we see a launch of these new arena based team shooters.