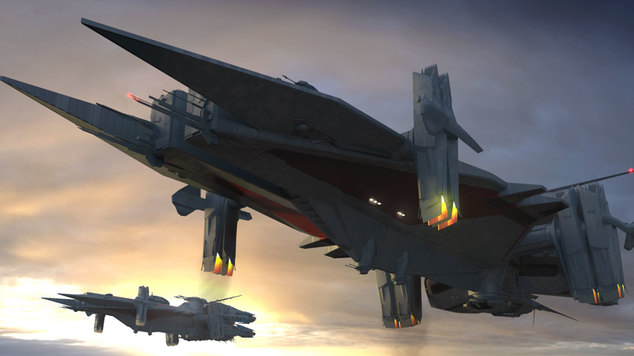 Star Citizen's $2,500 Ship of Dreams
All aboard the world's most luxurious ship ride as we go over what you could do with $2,500.

As a brief reminder, this is my column and my opinion alone. I could write on this column today about catfish and that's just what I want to say. The opinions expressed below are mine and mine alone.

A new ship was released over the holidays, the Javelin, which went on sale for $2,500. Only 200 of these ships were made available, resulting in a profit of $500,000 or half a million dollars for the Star Citizen team. Each batch of ships sold out instantly, within 5 minutes, and some by players accounts within seconds. These ships are account locked (any ship above $1,000 is bound to account) so while other ships can be sold, this is a lifetime purchase, and in addition you are not allowed to sell CIG accounts.

The first issue I have with this ship, beyond the exploitive nature in which it is sold, is the price tag. For $2,500 you can buy a used car that runs and will last you years and maintain the value that you invest into it. For $2,500 you can buy almost any luxury good or multiples (Chanel, Louis Vuitton, Bvlgari, Tiffany, etc.) including diamond rings, designer handbags, more than 5 pairs of designer glasses, and more items that could, depending on what you buy, maintain and even appreciate in value. Your parents or financial advisor might suggest putting the $2,500 into bonds or ETFs, setting aside $500 for emergencies and the other $2000 in something that returns value on itself.

These are all items that maintain value and can be traded in the public market legally. Looking into items that don't hold value, you could easily purchase a best in class T.V. A 70" full retail 4K T.V. is only around $2,000. You can get a non-4k 80" T.V. at around that price. Assuming you can fit it into your home, everyone around the block would come to watch everything on it obviously. $2,500 would purchase a half month long cruise at full price and I'm not sure on discount cruises (you know, ones you buy a month or so before they leave port) you can find something near that price.

Travel abroad - you could spend a summer overseas with $2,500 if you get cheap enough airfare. A plane ticket might be $1,200 but the rest would go a long way if you live frugily for a few months. This is a major life experience.

CIG claims that the ships price was ABOVE RETAIL to help FUND the $20 starter packs that were also of limited quantity. Basically, players "donating" $2,500 to the glorious cause were helping to fund starter packs that were half off of their $40 normal price tag. So basically, you give CIG $2,500 and they give you a ship, with no weapons or equipment (an empty hull), and at the same time you're helping them discount A VIRTUAL GOOD by HALF OFF. Even big box retailers are nicer than that. They don't say, "okay everyone buying these Skylander characters above retail will help us discount the physical starter kit to get more people addicted!" No, they just discount things, because they want them to sale.

CIG could just as easily went and discounted the package. The game is paid for now. There is no need for additional development resources. The game WILL NOT consumer the current budget, considering they just got in TWO DAYS what most game developers need to finish THEIR FULL PROJECTS START TO FINISH. They got basically the SAME AMOUNT they asked for to even make the game originally from their Kickstarter, this time without Kickstarter fees.

We've only just touched on the marketing. There are only half a million or so "Star Citizens." So all of the money made so far, the 65 million plus. Divide that by half a million and you come to $130 each on average. Naturally, there is a lot of backers at the smaller tiers, and only a handful who are throwing around the big cash, but never the less.

Like microtransaction games, Star Citizen often encourages the community (and the big time backers) to keep donating, as they release ships that are better and more powerful. The Javelin, at its $2,500 price tag, is a much smarter buy than the Idris which is currently for sale in the War Pack for $5,000 replacing the meet Roberts for half a day perk (because CIG doesn't believe in what you buy is what you get, they can and will change anything they want to after you buy it because these are donations). So if you don't want to suck in the game and want to ride through space in style, then these ships are needed (even though they should all be available for sale at reduced prices at launch in-game). 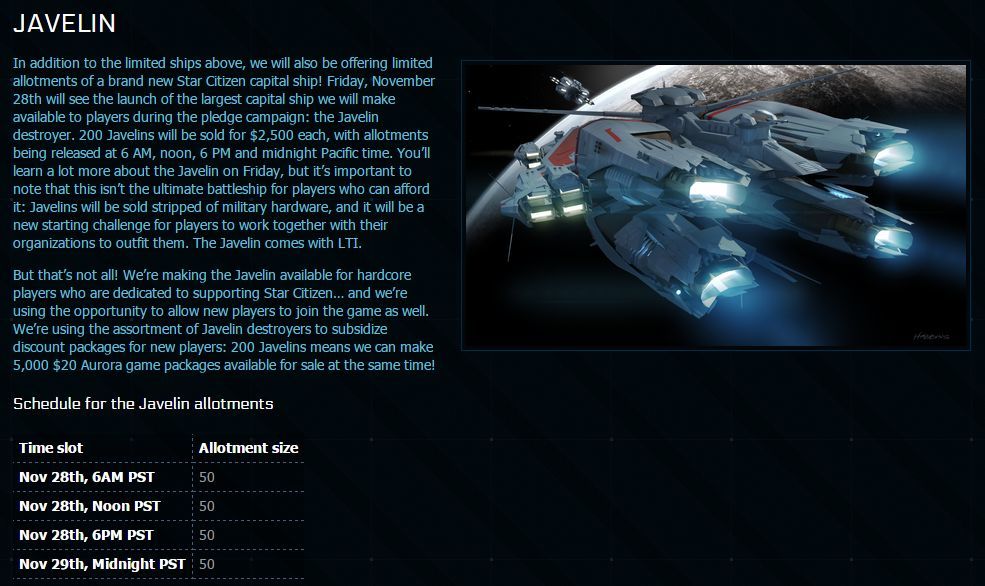 Let's touch on $65,000,000 and its meaning real quick as well. Most games get NOWHERE near this figure in development costs. A lot of big time games, including marketing, don't even reach this point. It's currently sitting at the 24th most expensive game of all time, almost overtaking Halo 3.

Yet, they need more money. Things are so hard around CIG they need people to really pinch together the funds to buy this ship, otherwise they just don't know how they're going to fund the pets they just promised. Which, btw, CIG offers both micro and macro transactions. So the stretch goal was more microtransactions for you to buy.

So you need to donate money to be able to help pay for them to sell you more things to help you pay for the next thing? HOW DOES THAT WORK???

As it stands, I can't even believe that Star Citizen is getting away with what it's doing. Everyone turns a blind eye to it, maybe reporting on some of the big numbers its throwing out, but at the end of the day I don't believe in a game that charges what CIG is charging when every other game on the planet can be bought at retail for less than $100 with everything included. There are very few games out that, with all DLC included, that don't even reach $100.

If you're a Star Citizen fan, that's fine, continue believing that the game will be alright. For me, at this point, as a consumer and someone who believes that merchants should offer things fairly, this is just not right. A warning that you don't have to buy this ship to enjoy the game isn't good enough, it should be $250 and be known as the most expensive ship ever, or not even be sold yet.

Why can't they wait until the game launches at this point to sell ships? I really wish Roberts would answer that question. Why can't they just stop making money for a second and work on producing the game, that's still just the Arena Commander and the Hanger. When? Hrm? Let's preorder more things for a game that's past his original development launch date (to original Kickstarter backers).

I'll write more in-depth about Star Citizen here shortly, I suppose, this is too long and too focused on one glaring issue with Star Citizen which is a $2,500 ship selling out within seconds and their new stretch goal of pets on your ship. Until then, I suggest thinking long and hard where your money could be better served until the game actually launches, at which point I would say once you play it and like it, you should invest into it, but there is no reason anyone right now should ever buy anything in the store until the actual product is "finished" or you know, at the somewhat alpha/beta mark where you know the game actually will be and not just the Arena Commander, but the actual you know, real game that's supposed to come.

I advocate anyone interested in SC buy one of the starter packs at around $35 and make sure it includes both games (Squadron 42 & Star Citizen) along with beta access. These are affordable options that will allow you to support the game (which doesn't need support anymore as far as I'm concerned at its current income rate) and give you access to the game which will let you actually try it before you invest any further. Anyone preordering ships should realize that many of them can't be used in the Arena Commander and the starter ships do work in the Arena Commander, so you can have fun with the game now and later on as well (and maybe even make some money off your money in the meantime).

For those that say you're not buying a ship but "supporting the game," just remember if they can't make a functional game at this point with $65 million before selling future rights to possible updates, then these might not be the people who you want to make the game for you. If Halo 3 can be made with almost as much money, Microsoft's huge marketing budget included, then uh, yeah...