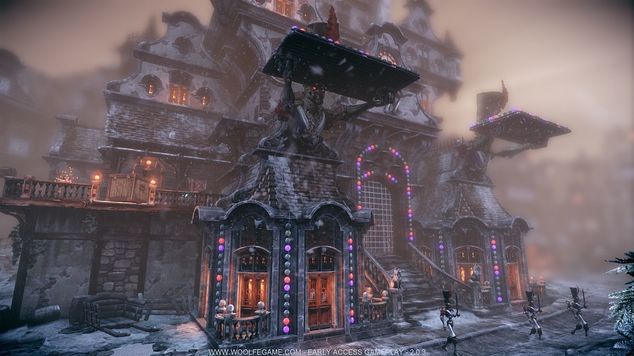 The Fear of Crowdfunding - Woolfe's Failure and Creeping Doubt
Ambition turns to sorrow as Woolfe's studios GRIN closes shop, unable to afford even postage to send the backer

This morning I was sitting here with dew covering every window that I can look out of, every cricket churping, with fond memories of these moments right before school, when the summer heat was still strong but the mornings were wet, humid, and cool. It's a very somber feeling for a very somber subject. As much as I love to think of myself as an inquisitor against the concept of crowdfunding, fighting for the consumer as developers focus more on the pitch and less on the project, it still brings me nearly to tears to think of a game, that gamers have invested their hard earned money into, not ever reaching their hands in the way it was meant to be. Today, I'm speaking of Woolfe.

On August 10th, it was announced that GRIN, the developer behind the game, went bankrupt. It took me a few days to process the thoughts inside of my head. I was given a review copy of the game awhile back, and tried it out thinking that it was neat. Sure, Hood's legs worked like putty in a few instances and there was a construction sign for one of the boss fights, but it was still ever so charming. I put it away, vowing to look at it once the first chapter had been finished. My playthrough was short, and I was impressed by what was offered, but felt that speaking too much about something so incomplete just wasn't satisfying to you, the reader.

Now here we are, that day will never come, and even worse, there were 2,378 backers who put more than $70k into the game, along with many members on Steam who reached in their pockets for a $10 to play the early access version. It appears, shortly after the Steam launch, the studio went dark for several months. Then the news hit, the studio was no more, bankruptcy had been filed, and the rewards would sit unable to be moved due to the lack of postage. The IP, source code, and assets are now up for sale - assuming anyone wants them.

With all of the hub-bub about Star Citizen, we have to understand and realize that no project is too big not to fail. Woofle looked to be a done deal. It looked to be a project that was going to happen. It was $10 on Steam and was going to feature two chapters. Most of the first chapter was done. Sure it took about an hour and a half to get through, but a game like A Story About My Uncle took all of what, 3 or 4 hours to complete? It's a satisfying game. Nothing says that a game has to be hours and hours and hours long to be good, it just has to make you smile afterwards.

Yet, here we are, unable to even make an argument for the game. It's gone, possibly never to return, and everyone's money has now vanished with nothing more than a demo left in the players hands. If that wasn't enough to get the game enough cash to make an actual game, then who would consider purchasing it? It's not that the developers were trying to scam the players, it's that they failed to properly plan the game out and how much cash they needed. I assume they thought it'd be easy, from the tone of the farewell letter, but later found out it's hard. Derek Smart is a big fan of this notion, constantly going on about the pitfalls of development.

There isn't all failure, mind you, Shroud of the Avatar is a fantastic example of success, but Richard Garriott has deep pockets of his own and could easily manage to rescue the game if it had ever gotten into a rut. That security, I am sure, led to the fast as lightening alpha for the game, where they've worked hand in hand with the community every step of the way. I rarely hear anything bad about SotA, so I assume that the community is generally happy. They've even made good on promises for player owned housing, selling towns for thousands, and then implementing them without worry.

Star Citizen is going through a bit of a scare right now. Modules are once again behind schedule, Illfonic started laying team members off while CIG argues that they're pulling everything in-house. Players ponder why they weren't told that this was part of the process, if there is something wrong with Illfonic's work, or if it's business as usual. Doubt isn't a healthy thing for a game, and while die-hard Star Citizen fans will true believe no matter what, the doubt in the general public can turn funding from full tilt to zilch. While we would assume a game like Star Citizen is set, we have to ask a few questions: what if development on a module has to be set to zero, for quality reasons? Does CIG just produce a bad product or do they rely on incoming funds? We can all hope and pray that a game will go from 0 to 100% without taking a step back, but it's all possible.

I hope the very best, but everytime we see failure, everytime we see how easy it is for a studio to collapse in the development process, it reminds us all to ask for more, believe less, demand more, and it's both a good and bad thing - blind faith is fun, exciting, and rewarding. Believing in an idea, not asking questions, and seeing a return is a fun experience, but at the same time, it's risky. Right now, for a game like Star Citizen, we can all assume the delays are part of natural order and just continue dreaming of the game will be, or ask questions like are there enough experienced team members to properly schedule out the components so that deadlines aren't missed? As far as I was aware, Space Marine was supposed to be playable at Gamescom, but all we seen was demo footage.

Returning back to Woolfe, things like this are sad, and it's important that when you back a project you have to understand - you're also enabling it. You're making it where they will go ahead. You're showing your signs of support. If the project is doomed from the start, then everything you will have given is for naught. Yet, that isn't to say we should turn a blind eye to creating our own dreams. There is plenty of games out there that have yet to be made and ideas that require just a little bit of help to get off the ground. Consider, if you will, that publishers only want to back sure things, and developers only want to pitch what the biggest market they can tap into will want. This doesn't always mean we'll see fun and and exciting games, hence the idea of crowdfunding.

Yet, we have to make sure to ask some questions - is the project possible with the funds requested? What kind of salaries, how many staff members, and will they be able to work with the engine? Does the engine have costs? Can this game reach launch without a publisher? There are ever so many questions to ask, and one has to ponder, if they were asked in Woolfe's case if the game would have been funded. For Star Citizen, I have every thought that a game will be made, but will it be what players want? For Woolfe, the version released to Steam... wasn't what they wanted. The reviews were critical, the press sometimes painful, but they released an early access version of the game. Time will only tell, but as always, it's in the best interest of the industry and players that every successful crowd funding venture turns out to be a glowing success.

With that, I'll go back to enjoying the morning view while it lasts, before the heat burns the dew away and the ground starts to sizzle before the evening rains come.