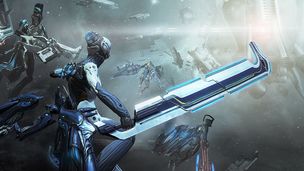 Ten Tips for Getting Started in Warframe in 2015
Warframe is a free-to-play third person shooter available on PC and console. It's been out for a little over tw
Guide
Warframe

An Intro Guide to Warframe
This week we'll be giving away closed beta keys for Digital Extremes' latest title, Warframe. To help get you u

This week were running a beta key giveaway for the latest game from
Digital Extremes, Warframe.
To help give our readers an idea of what Warframe is all
about, weve put together an intro guide to some of the games core
features. For those of you who end up snagging one of the closed beta
keys were giving away this week, it will also provide some useful
insights into what makes the game tick.

Also be on the lookout later this week for our hands-on preview of Warframe.
Xerin and I have been playing the heck out of the game, and each offer
up our different perspectives on the game based on our time with the
closed beta so far. In the meantime, this primer will get you up to
speed on what Warframe is all about.

Warframe isnt what youd expect when you hear the words
online shooter. Instead of focusing on PvP match types, Warframe
is a cooperative PvE game. Teams of up to four players can embark on a
series of progressively more challenging missions that take place on
enemy spaceships. The missions themselves are very reminiscent of your
typical hack-and-slash setup of randomized dungeons, enemy encounters,
and loot.

Dont get me wrong though; Warframe is very much a third
person shooter through and through. For those of you unfamiliar with
developer Digital Extremes place in shooter history, the studio is
co-creator of the original Unreal. Needless to say, DE knows a
thing or two when it comes to solid shooter gameplay. And unlike where
the Unreal Engine ended up going in later years, Warframe is
more about action gaming rather than boring cover systems and dudes who
dont know when to stop taking steroids.

Following a brief tutorial, youll be able to pick from one of three
available starting warframes:

You can purchase or create a pretty decent variety of Warframes, each
offering a distinctive playstyle. For example, Mag focuses on magnetic
manipulation and is perfect for reducing enemy shields, pulling targets
into melee range, or crushing them for massive damage, while Trinity
plays more of a support role, capable of providing another means for
players to regain health or energy.

To swap out your active Warframe, open up the Arsenal tab at the top of
the screen, and then click on its portrait. This will open up a listing
of any Warframes you own and those that can be purchased for credits or Platinum. Blueprints to create certain Warframes can be purchased in the market, and then created using the Foundry.

To start out with, you will have one additional open Warframe slot,
with other slots costing you Platinum to unlock. Were also dubbing Warframe
a dude game due to the fact that all starting Warframes are male,
while female options have to be purchased for cash or created from
blueprints. The logic behind this move baffles us to be quite honest,
but I suppose some game developers still consider female shooter fans to
be a myth maybe?

Advancement works a bit differently in Warframe than in your
standard online PvE experience. While you do get an overall ranking as a
player, power advancement is based on active usage of a specific
Warframe or weapon. As such, all warframes and weapons you own will not
only level up independently from one another, but also come bundled with
their own skill trees.

Swapping out weapons will be the same process as swapping Warframes
described above. From the Arsenal screen, click on the weapon and you
will see a complete list of available weapons. From here you can equip
any weapon for that slot you currently own, purchase new weapons, or
even some blueprints to create new weapons in the Foundry screen.

As you actively use a weapon in combat, you will earn experience
towards leveling up that specific weapon. Each time you level one up,
you will earn one skill point that allows you a certain degree of
customization for a particular weapon. This includes things like
unlocking mod slots, faster reload times, bigger clip sizes, or even
higher damage output.

On the left you can see an example of a basic weapon
skill tree, while the right shows the expanded Pro tree for the same
weapon

As shown above, all standard weapons or those purchased with in-game
currency will come bundled with a basic skill tree. Advanced (Pro) trees
can also be unlocked, but will cost you Platinum (Warframes
virtual cash shop currency).

Pro Tip: One of the easiest ways to level up your
melee weapons is to run any missions with the Infested enemy type.
Infested are kind of like mutant space zombies, and will charge at you
in packs rather than using ranged weapons. Youll start seeing
Infested missions as soon as you complete the first chain of missions
in the Mercury system and progress into other regions.

While Warframe does have a brief tutorial that helps
familiarize you with combat basics, it really is pretty basic stuff that
just about any shooter fan or online gamer will grasp fairly quickly.
There are a number of other things to be aware of that can help
immensely once you begin running missions.

While terminal hacks could fall under the basic mission tips above,
they deserve their own special section here. Not only do you need to
interact with terminals somewhat frequently, but the process for doing
so is a basic mini-game, and there are some conditional factors to be
aware of as well.

When you approach a terminal that you can interact with, you will be
prompted to do so by hitting the X key. Once you do, a randomized
mini-game will begin, and you will have precious little time to complete
it. In most cases, failure just means that youll have to start over
again, though there will be certain cases where your shields and health
will slowly deplete until a terminal is successfully hacked.

The mini-game itself is about as straight forward as it gets. As you
can see below, you will be presented with a number of hexagonal tiles,
each with patterned markings. Clicking on a tile will rotate it, with
the goal being to connect the lines between each individual tile.

There will be a number of different reasons youll need to interact
with terminals depending on the mission and enemy type. Some examples
include:

Warframe is a very solid cooperative shooter, and one that
offers a great alternative for gamers from various genres. In a lot of
ways, Warframe succeeds in many of the areas where games like
Hellgate: London failed to deliver. In other words, taking the
formula of a Diablo style hack-and-slash, but bringing it into
modern times. Millions of Diablo III fans may disagree, but
playing action games in an isometric perspective is one of those things
Id be all too happy to see go the way of the dinosaurs.

Dont forget to check back later this week for our hands-on impressions
from the Warframe closed beta, and be sure to snag one of the
beta keys well be giving away this week so that you can check the game
out for yourself!

Ten Tips for Getting Started in Warframe in 2015
Warframe is a free-to-play third person shooter available on PC and console. It's been out for a little over tw