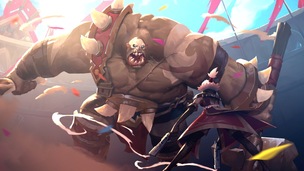 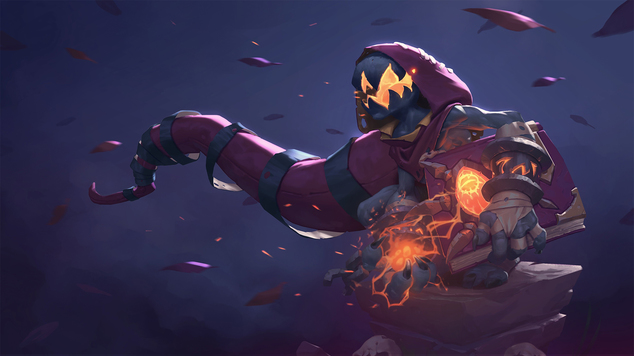 Ezmo is a ranged mage that relies on mobility and rapid attacks in order to confuse and reposition against opponents. Despite being a ranged Champion, he has short basic attacks meaning that he has to get a little bit closer than most of his peers. Unsurprisingly this can leave Ezmo incredibly vulnerable, and he not only has to rely on positioning to stay alive, but also his Displace in order to dart away when things get a little hairy.

Aradu, a powerful warlock summoned and imprisoned Ezmo, but Ezmo saw his opportunity to escape when the warlock became too engrossed in reading his tome. He sealed Aradu's soul and mind within it, and has been carrying the tome ever since.

What’s particularly powerful about Ezmo isn’t just his rapid attacks and ability to teleport quickly around the arena, but also his utility. A valuable deflect in Arcane Barrier, a powerful pull and knockback in Chaos Grip, and an exceptionally useful root in Shackle highlights what a potent kit he has. Although there are times when his reliance on Displace is a little too high, effective rotation of his abilities - and if you manage to land them - can ensure he survives for lengthy periods of time while dealing significant damage.

Arcane Fire (LMB) - As Ezmo’s basic attack, Arcane Fire is the cornerstone of his kit. Allowing Ezmo to fire 3 rapid attacks at relatively close range, Arcane Fire offers high immediate damage. With relatively fast projectile speed and a quick reload (less than half a second) Ezmo can pummel unsuspecting Champions. The major downside to Arcane Fire isn’t just its limited charges, but also the fact that its range is so short you almost always place yourself in harms way to land it. Despite that, it does allow Ezmo to poke quickly when in range and if he uses Displace effectively, he can get in and out before people know he’s there.

Chaos Grip (RMB) - Your primary form of defence when faced with a melee Champion being a little too close, Chaos Grip acts as an immediate knockback, or a pull depending on the length of time you charge it. Whether you’re bursting down an Orb in the center of the arena, or sniping an opposing player, Chaos Grip requires exceptional aim. It’s important to know when to use Chaos Grip: waste it on a maximum charge and you leave yourself vulnerable to melee attacks. Use it too soon at close quarters and you may have no ability to capture the Orb when it spawns.

Displace (Space) - Without Displace Ezmo is incredibly vulnerable. It’s fundamental to his survivability, but also his aggression. As an instant teleport that can be used twice, it’s invaluable for diving and retreating. Deciding whether to use it defensively or aggressively is incredibly important. Miss-time Displace and you can be killed instantly. Play too passively and rarely dive with it, and you’ll deal too little damage with Arcane Fire. If you can, it's a good idea to double use Displace so that you teleport next to someone, unload Arcane Fire, use Displace again (to their opposite side) and unload Arcane Fire again.

Arcane Barrier (Q) - Arcane Barrier allows Ezmo to mitigate all incoming melee and ranged attacks in front of him. Although its duration is brief and reduces your turning circle speed, it’s exceptional for allowing Ezmo to gain some much needed survivability. Used timely against key abilities (such as Jade’s Snipe) it can provide Ezmo with breathing room for other abilities to come off cooldown, or to then quickly counter with an aggressive attack.

Shackle (E) - With a very long range, Shackle is Ezmo’s only form of hard crowd control. Rooting anyone caught for 2 seconds, it can allow Ezmo to setup high burst damage if he follows in. The one downside to Shackle is the fact its point of impact is tiny, and it has a delayed cast. You need to predict where the enemy Champion will be: this can be tricky. Ideally, you want to use Shackle at maximum range and once you catch someone, dart in with a quick jab of Displace > Arcane Fire > Chaos Grip. Finally, Shackle can be used defensively but due to the cast time, if someone is already attacking you, you’ll take very high damage by the time it’s cast.

Tome of Destruction (R) - It may appear a somewhat niche ability, but Tome of Destruction is invaluable for Ezmo. Providing a brief knockback on summon, the Tome can not only create space between you and an opponent, but it also allows you to deal massive damage. Having Tome of Destruction mimic your attacks - if you place it correctly - can allow you to bombard a Champion with huge amounts of Arcane Fire. With experience, Tome of Destruction proves particularly powerful at zoning enemies, sneaking an Orb, creating space or attacking round corners. It’s one of Ezmo’s strongest abilities.

Siphon Life (Shift + LMB) - Probably one of the strongest abilities in the game, Siphon Life allows Ezmo to bypass counters and shields in order to deal continuous damage. Healed for the same amount he deals, it not only provides Ezmo some much needed sustain but also ensures he can still deal high damage versus Champions such as Sirius or Bakko. Although it’s expensive (two focus) it’s well worth using, especially if you’re low health or need to burn someone down with guaranteed damage. Just be aware that it has a very short range, and your turning speed isn’t particularly fast while breathing fire.

Arcane Ward (Shift + Q) - Allowing Ezmo to protect his Arcane Barrier onto himself or ally as a bubble, Arcane Ward not only allows Ezmo and anyone he casts it on to attack freely, but it also absorbs a significant amount of damage. If you can, try to always cast Arcane Barrier on an ally who’s on the frontline so that they gain significantly better survivability. It’s also particularly good for those “oh shit!” moments when you anticipate you or an ally are due to be attacked from multiple locations that Arcane Barrier cannot protect you against.

Grimoire of Chaos (F) - Your Ultimate ability is a ground targeted skill that draws enemies into its center. It’s fairly difficult to land because most Champions have an ability to escape it. Despite that, if you can time it’s use so that it’s cast after enemies have used their mobility, it’s near impossible to escape from. It’s also possible to knock players into its radius with a quick Chaos Grip to the face. 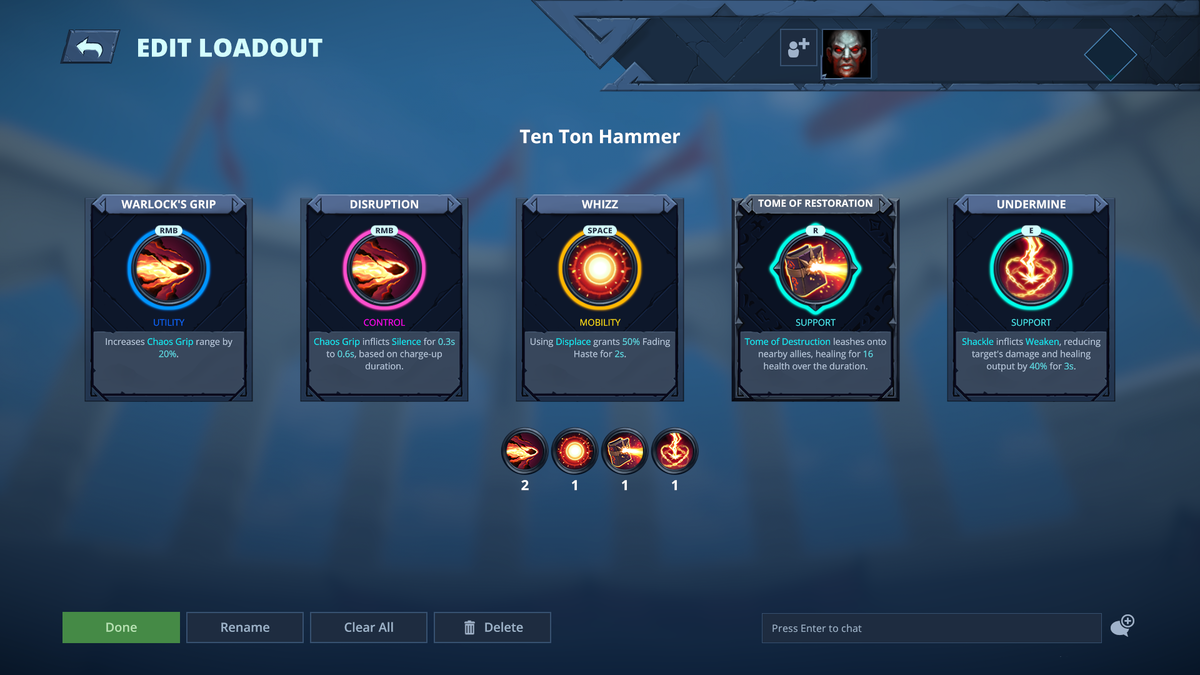 Against any composition, Disruption can be a valuable choice. Improving Chaos Grip so that it causes a Silence (based on the duration of your charge) can allow you and your team to shut down a single opponent and prevent them using any abilities.

Building on Ezmo’s Displace, Whizz grants him 60% increased movement speed for 2 seconds after each use. With Displace usable twice, it affords Ezmo incredible mobility.

Allowing Ezmo to sustain himself, Tome of Restoration provides 16 health to all those Ezmo's Tome tethers to, allowing him to also heal his team. While it won't help him survive being burst down, it will provide some mitigation versus basic attacks.

Undermine causes anyone affected by Shackle to suffer 40% reduced damage and healing for 3 seconds. For defending yourself, or bursting an opponent down, it's invaluable.

These Hero Threat Levels (1 being lowest threat and 10 being highest threat) are to help you determine which enemy Heroes can give you a headache. For the Heroes listed here, take extra care as they're particularly dangerous for Ezmo.

This list of tips and tricks are just a handful of things we think will help your Ezmo play. We'll continue to add to the list as required and if you have any tips you'd like to share, let us know in the comments below and we'll place them here.

1. Arcane Fire is strongest when used at point blank range. It ensures you can't miss, and any follow-up attacks after your opponent realizes you're next to them are easy to land (even if they begin to move away).

2. Arcane Fire can't really capture an Orb because you'll need to reload before you kill it. This buys the enemy team time to snatch it. Wait for the enemy to damage the Orb some before you unload your attacks.

3. After your first Battlerite, Arcane Fire fires at incredible speeds when you've used Displace. Use this to quickly burst someone down before they even have chance to react.

4. Remember that Chaos Grip knocks back if you simply tap RMB, or pulls if you hold it down.

5. The pull on Chaos Grip is invaluable when steeling an Orb, as you can pull it towards you out of the reach of other players.

6. At full charge Chaos Grip deals 20 damage, more than enough to steal an Orb from maximum range if it has taken some damage.

7. Displace is key to Ezmo's play style. Use it to engage, and keep the second charge to escape.

8. If you're playing aggressively, use Displace twice to zip next to an opponent, unload Arcane Fire, use Displace to switch sides and unload again. It's a double-whammy of damage. Just be sure you can escape afterwards.

9. Skilled players anticipate Ezmo diving them with Displace. They'll then hit you with crowd control to stop your second escape. Only dive if your enemies have used their CC or you have a team-mate who can peel for you.

10. With Battlerite's Displace improves your movement speed and your attack speed. Always have it ready for when you need to burst someone, or to escape quickly.

11. Don't forget that Displace can send you through walls: use this to escape!

12. Arcane Barrier is great for mitigating one large attack, and also prevents melee damage. Use it when your Displace is on cooldown to buy you time.

13. Shackle has a fairly long delay. Only use it if you can follow in with another attack, or to prevent an ally being attacked by an opponent.

14. You cannot Shackle someone and fully charge Chaos Grip - it's best to use Shackle > Displace > Arcane Fire for gaurenteed damage (quicker too!)

15. Use Tome of Destruction to body-block for you. It'll bump away anyone near you when summoned, and then allows you to deal high damage.

16. Tome of Destruction is great for stealing an Orb as it allows for double the dose of Arcane Fire.

17. Tome of Destruction is fantastic for triggering your Exhaust Battlerite. Considering it only needs 3 hits of Arcane Fire to trigger, having 6 fire at once allows for insane application.

19. Siphon Life is best used when you're low health, or trading with an opponent and you have no "out". Its health return is high, and so is its damage.

20. Save Siphon Life to cut through a counter-heavy composition. It's free damage if they remain stationary.

21. Arcane Ward should be applied liberally to your team-mate. It'll save their life, and if they're melee, allow them to deal more damage without retreating.

22. If you're playing super aggressively, use Arcane Ward on yourself. It'll allow you to take more damage, and still attack with Arcane Fire.

23. Only use Grimoire of Chaos when players have used their "outs". It's too easy to avoid otherwise.