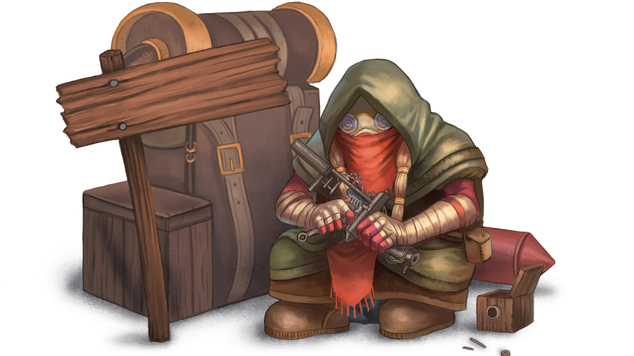 Iva is fast becoming one of my favorite Battlerite champions. With a varied kit that allows her to deal high ranged damage, while easily escaping melee pressure ensures she can survive with relative ease. The fact she can shut down high value targets with a powerful stun, while avoiding Counters thanks to her Flamethrower ensures she can deal with most compositions.

A scavenger from the outer realms. Iva has engineered her own arsenal of weapons. Firing crazy rockets or unleashing a storm of bullets is her way of greeting her opponents in the Arena.

Despite her utility, Iva is not only capable of dealing high damage but also surviving for lengthy periods of time. Her ZAP shielding, alongside the flight distance of Jet Pack, ensures she’s a constant nuisance. In the right hands, she’s a constant threat and works exceptionally well against Champions such as Sirius and Rook.

Boomstick (LMB) - Iva’s basic attack is unique in comparison to most other Champions. Where most fire a single projectile, she fires multiple small projectiles in a small arc. Acting like a shotgun, each pellet deals individual damage, meaning that her basic attack burst comes from landing all pellets at once as opposed to individual ones. The short range of Boomstick ensures that to truly be effective, Iva has to be close up to enemies. That said, being so close to opponents does ensure that missing is difficult. With only two total rounds in her chamber before she’s forced to reload however, you’re best saving Boomstick until you know you can land your attacks. Poking with Rocket X-67 is far better.

Rocket X-67 (RMB) - Acting similarly to many other high damage ranged attacks (such as Ruh Kaan’s Shadowblast), Rocket X-67 allows Iva to deal high impact damage from afar. Anyone caught in the blast takes maximum damage while those around its radius take minor splash damage. For stealing an Orb when it’s below 30 health, Iva can often guarantee its capture with a well placed rocket. Just be aware that the wind-up time to fire the Rocket X-67 is fairly long, and as Iva is unable to move while casting, you’re vulnerable to being interrupted. It’s also important to remember that if you can cast Rocket X-67 on enemies covered in Oil (from Jet Pack), they’ll suffer a damage over time effect.

Jet Pack (Space) - Your key survival tool and primary means of applying Oil outside of Battlerites, Jetpack has two uses: escaping and diving. Considering it allows you to leap of Champions and terrain, Jet Pack is fundamental to survival and avoiding incoming damage. With a fairly lengthy cooldown however, wasting it can see you left vulnerable (especially if Zap is on cooldown). Ideally you want to rotate Jet Pack and Zap so that you always have one available. In addition, you need to gauge when you want to apply Oil to an opponent, or when you simply need to leave. In simple terms, only use Jet Pack aggressively if you can ensure you can get out, or that you’ve enough Focus to trigger Flamethrower, or have a charge of Rocket X-67 available. It’s also worth using Jet Pack over scenery as if you dive away somewhere visible, enemies can quickly find you and if Zap is on cooldown, you’ll take huge damage.

Zap (Q) - Zap is incredibly important for Iva as it's part of her utility in protecting her team and herself. Considering it can be cast without line of sight, the 28 mitigation is huge and combined with the movement speed buff (and cleanse) ensures anyone protected by Zap can escape with ease. Ideally you want to save it for yourself in the event Jet Pack is on cooldown, but for any ally under pressure, feel free to cast it their way.

Tazer (E) - Tazer isn’t about damage, and is instead about shutting down enemy Champions. Allowing you to dispel positive buffs, it also stuns enemies who attempt to use an ability while under its effect. When you need to prevent an action, or lock down a Support Champion to burst them, Tazer is key. Used at the right time, the stun buys you enough time to fire off a guaranteed Rocket X-67, or to simply land a few basic attacks from your Boomstick. The stun duration is also long enough to give you time to retreat, or to peel for an ally who’s under pressure. It’s important to never simply fire Tazer off: only use it with purpose when you need to prevent a player action.

Tractor Beam (R) - Without doubt an invaluable tool, and probably one of the strongest abilities in the game, Gust allows Blossom to reflect any projectile sent her way. Not only that, but it also pushes enemies who're near her, backwards. Whether you're creating space, sending back a powerful projectile or simply buying a team-mate time, Gust is invaluable. In most instances you'll often use most of your Focus on Gust, especially versus ranged heavy compositions.

Flamethrower (Shift + Space) - Dealing enormous damage, Flamethrower is a channelled ability that costs 2 Focus. Pairing with Oil, it’s capable of cutting through Champions incredibly quickly and doesn’t trigger Counters. It also cleaves, allowing you to hit multiple enemies who happen to be near each other. Although the Focus cost is high, it’s a tradeoff that’s well worth it. Any Champion that drops a Counter will, unless they cancel the ability, eat enormous damage to the point where they’ll be forced to use an escape ability. It’s then possible for Iva to follow with Jet Pack in the knowledge that the victim cannot counter or escape for some time. Just be sure to always cover an enemy in Oil before kicking up Flamethrower for the additional damage.

Concussive Shot (Shift + E) - Providing a powerful incapacitate, Concussive Shot isn’t an ability you’ll use constantly. However, it is an ability that has key value. Whether protecting yourself or shutting down an enemy for 3 whole seconds, the duration of the Incapacitate buys you significant time. It's an alternative to Tractor Beam in the sense it still protects you, but allows you to then freely move away. Just be aware there's a very brief wind-up time to release the shot, and its telegraph is very slim. Only cast it if you can land it.

Machine Gun (F) - Allowing Iva to deal rapid fire attacks straight ahead of her, Machine Gun is brilliant at cutting through multiple Champions. The major downside is the fact the rapid delivery of bullets is incredibly vulnerable to Counters or Deflects. At times, Iva can often cause more harm than good simply by using Machine Gun at the wrong time. Despite that, if you can time it so you know your opponents have used their abilities, it deals massive damage. In most instances, though, Flamethrower is a better use of Focus. 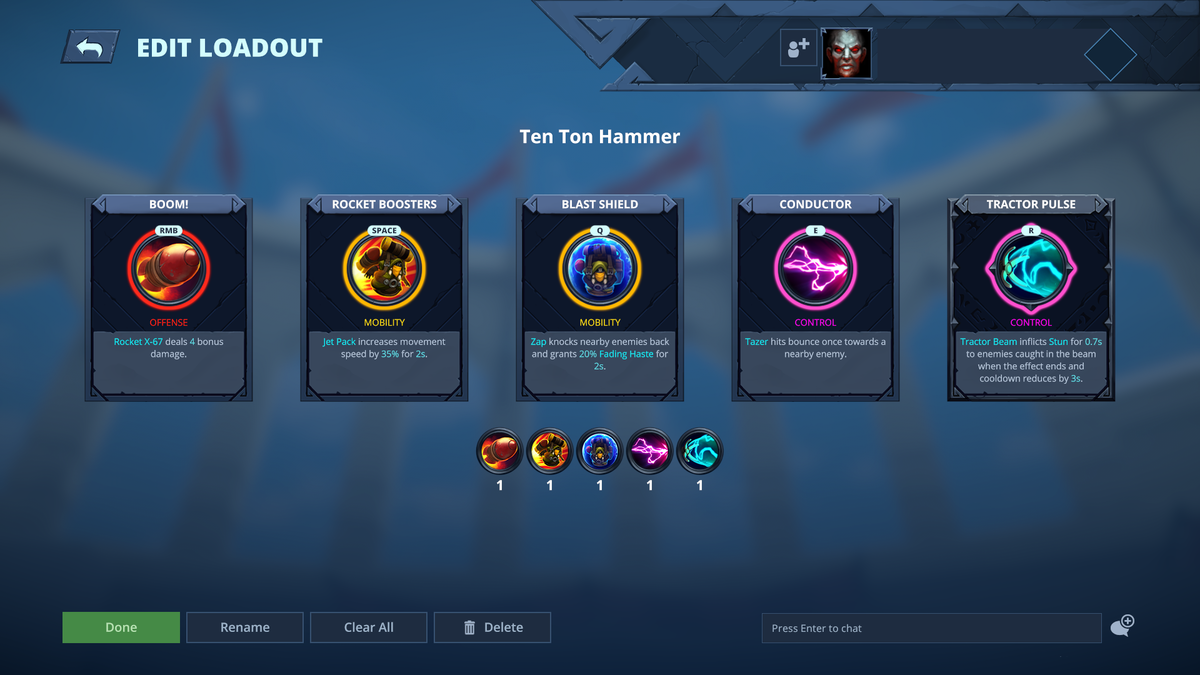 Without Jet Pack or Zap, Iva has little mobility. Gaining more from Rocket Boosters ensures she can zip around the area when landing, making her very hard to hit.

Knocking enemies back and granting Iva 20% increased movement speed, Blast Shield offers mobility and utility. For kiting, repositioning or simply escaping, it proves invaluable. It's also great when you cast Zap on an ally.

Conductor causes Tazer to bounce to nearby enemies, allowing her to stun multiple foes at once. In 3 v 3, this is amazing for shutting down a team that's tightly grouped together.

Allowing Iva to stun anyone in her Tractor Beam if it lasts its full duration, Tractor Pulse also sees Tractor Beam have its cooldown lowered by 3 seconds, ensuring she can defend herself much more often.

These Hero Threat Levels (1 being lowest threat and 10 being highest threat) are to help you determine which enemy Heroes can give you a headache. For the Heroes listed here, take extra care as they're particularly dangerous for Iva.

1. Boomstick is best used at close and medium ranges. Try to land all pellets against your opponent by leading your shots. If all four land, you can cut down players incredibly quickly.

2. There are only two rounds in your Boomstick chamber, before you have to reload. Typically you'll begin to take damage from opponents after your first volley, so retreating quickly after the second is often neccesary.

3. Emptying both rounds of Boomstick on the central Orb followed by a Rocket X-67 will gaurentee it's yours.

4. Boomstick provides a high amount of Energy gain. You should constantly use it when within range of an opponent to ensure you gain enough to access Flamethrower and/or Tractor Beam.

5. Against Counter heavy compositions, try to hit enemies with the splash of Rocket X-67 rather than directly. Only hit them directly if you know their Counter is on cooldown.

6. Remember that Rocket X-67 deals damage over time against enemies coated in Oil. Always have one spare for when you've used Jet Pack.

7. Always have one charge of Rocket X-67 ready for when the Orb spawns. When it reaches 30 health, you can steal it every time.

8. Don't use Jet Pack to engage unless the enemy you're diving onto is weak or vulnerable. Crowd control fired against you can stop you returning, and you're then left with only ZAP to escape.

9. Try to use Jet Pack over scenary, or over an enemy when escaping. Your oil slows, and jumping over scenary ensures you lose line of sight with your opponent.

10. Many players will wait where you blasted from when using Jet Pack. Don't return back if you can't see where your enemy went. They're likely waiting for you.

11. Remember that ZAP cleanses, grants movement speed and a high shield. Sometimes you need all three, sometimes only one of the benefits. Either way, it's important not to waste ZAP. If under only light pressure, save it for when you're in serious trouble.

12. Only cast ZAP on allies if they're due to take lots of damage or if they need to retreat. Without ZAP for yourself, Iva is vulnerable.

13. Only ever use Tazer with intention. You want to cast it to trigger the stun, so ideally just before an opponent uses an ability. Casting it against a Support Champion is a good way of buying your team time to burst an enemy down.

14. If under pressure, use the stun duration of Tazer (1.2 seconds) to run away. It'll save your life.

15. Use Tractor Beam when ZAP and Jet Pack are on cooldown. It offers total immunity to everything in front of you.

16. Tractor Beam is great for preventing incoming damage, such as Jade's Snipe. The moment you hit R, your shield will appear, allowing you to defend yourself in a pinch.

17. If an enemy is trying to strafe around you when using Tractor Beam, don't try to turn (it turns too slowly). Instead, cancel with "C" just before they reach you, and use Jet Pack to escape.

18. If an ally is under heavy melee pressure, use Tractor Beam to pull the enemy off them. It'll buy your team-mate breathing room to escape.

19. You should always be using Flamethrower against Counter heavy compositions. If the enemy doesn't cancel their Counter, they'll take huge damage.

20. Ideally, use Flamethrower on enemies coated in Oil. The damage bonus is significant.

21. Concussion Shot buys you enough time to escape, or to land a perfect Rocket X-67 against the incapacitated enemy.