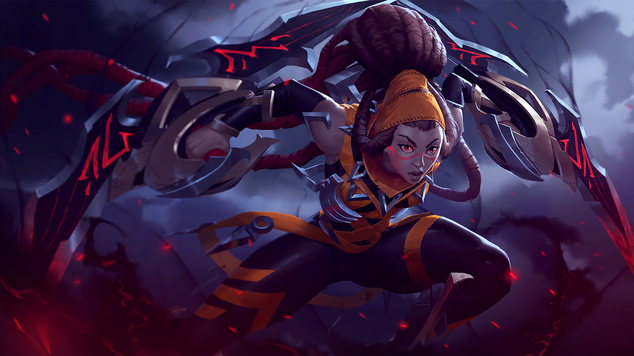 Battlerite: Jamila Build Guide
In this Oldur Build Guide, we provide an overview of her strengths, abilities, Battlerites and matchups.

Jamila is an incredibly frustrating Champion to fight against, but one that’s a great deal of fun to play. In terms of playstyle, she falls somewhere between Croak and Shifu, having a kit that mixes burst and crowd control in heavy doses.

A young assassin from the Shadowblade clan, Jamila suddenly found herself the new leader after the death of her mother, the previous matriarch. As the youngest leader in the clan’s history, some call her too inexperienced and undeserving of the title. Determined to silence those detractors, Jamila enters the arena to prove her mastery of the Shadow Arts.

In the right hands Jamila is hard to pin down, and her use of Elusive Strike and Hook Shot ensures she can engage easily, while Shadow Dance provides a valuable out. This combination of burst damage, mobility and crowd control ensures that Jamila can deal massive damage - and get out alive - if played by a skilled individual.

Having said that, Jamila is easier to punish in comparison to Croak. Baiting her counter, and punishing her when it’s on cooldown can see her killed incredibly quickly. If she does use Shadow Dance effectively however, especially with a well timed Elusive Strike to incapacitate one foe, she can often harass with impunity before escaping.

Assassin's Cut (LMB) - Assassin’s Cut is a particularly quick basic attack, that lands a heavy blow on the final swing. Against Champions that are moving, it’s sometimes difficult to land the final attack. Despite that, if you can continue to chase your opponent, or have your team hit them with crowd control, the last stroke of 16 damage is considerable. Its range feels slightly longer on the heavy attack, so you can afford to be just a little further back when attacking.

Shuriken (RMB) - Causing a snare that lasts 1.5 seconds, Shuriken should be used when pursuing enemies, or retreat. The slow (30% decreased movement speed) is significant, and ensures few can escape Jamila. Anyone wanting to evade her will struggle to once slowed, and it provides a perfect opportunity for your team to capitalize on one debuffed player. What I will stress is to not waste Shuriken. I regularly see Jamila players poke with it, without following in. Shuriken should be used when near opponents, or at the very least when your allies are.

Elusive Strike (Space) - Although Elusive Strike isn’t particularly quick, if you trigger in at its shortest distance - off of scenery - you can cause an incapacitate at some speed. Ideally you want to always leap off a wall, and if you can, inflict the incapacitate before turning your attention to another opponent. Just remember that you can hold Elusive Strike to significantly increase its leap distance, allowing you to reach players who might think they’re safe.

Shadow Dance (Q) - Your primary means of disengaging, or re-positioning, Shadow Dance is a counter that grants stealth, movement speed and a powerful attack. While you’ll often use Shadow Dance purely to escape, using the stealth to dive back into a fight in order to gain the bonus attack and the powerful DOT effect, is important. The damage of the stealth attack, combined with Phantom Cut, can lop off a huge amount of health from any Champion, and affords Jamila considerable burst - especially when paired with Elusive Strike.

Hook Shot (E) - Hook Shot has a lengthy cooldown, but it provides Jamila with an engage and escape. Causing her to pull herself and an enemy together, it’s a meet-in-the-middle type of skill. Considering it has significant range, it allows Jamila to dive and still retain Elusive Strike and Shadow Dance. The fact Hook Shot doesn’t pull Jamila entirely away from her team also ensures she’ll often remain within touching distance of an ally. If you can, try to use Hook Shot first if you need to quickly close distance, before following up with a Shuriken > Assassin’s Cut.

Deadly Blow (R) - Deadly Blow offers Jamila limited, but much needed sustain. As a slow firing melee attack, Deadly Blow deals high damage, and heals for the same dealt. Considering it also offers a stun, the Energy cost (25) feels fair. Having said that, Deadly Blow is predictable and easily interrupted. If you can, try to use it just before your Incapacitate from Elusive Strike expires for a double dose of crowd control and damage.

Blood Kunai (Shift + RMB) - Blood Kunai is a defensive skill that inflicts Weakness. Lowering the damage an opponent deals by 50%, it’s exceptional against high damage Champions such as Rook or Ruh Kaan. If you land Blood Kunai, the fact it bounces to the nearest ally to heal them for 16 health also allows you to mitigate any damage they (or you) might have received. Save this ability for when your teammate or yourself are under heavy pressure to ensure they take significantly less damage.

Phantom Strike (Shift + Space) - Phantom Strike acts the same as Elusive Strike, the key difference is that the attack is instant, and also allows Jamila to cause a snare, as well as the standard incapacitate without needing to hit terrain. The immediate opportunity to hit players with Phantom Strike, and cause a double-dose of crowd control, ensures Jamila can cause a fair amount of misery when players aren’t quite expecting it. In most instances, Jamila relies on this massively to shut players down and escape and/or engage.

Stalking Phantom (F) - A fire and forget Ultimate ability, Stalking Phantom is very strong. Allowing Jamila to release a phantom at a target foe, it will then continue to chase the affected player while dealing damage. Although it can be avoided if an opponent uses a skill which creates significant distance, if you time it right - and use it when your foe has used their “out” - it can deal considerable damage. If nothing else, Stalking Phantom is a fairly solid distraction when cast against an enemies Support. 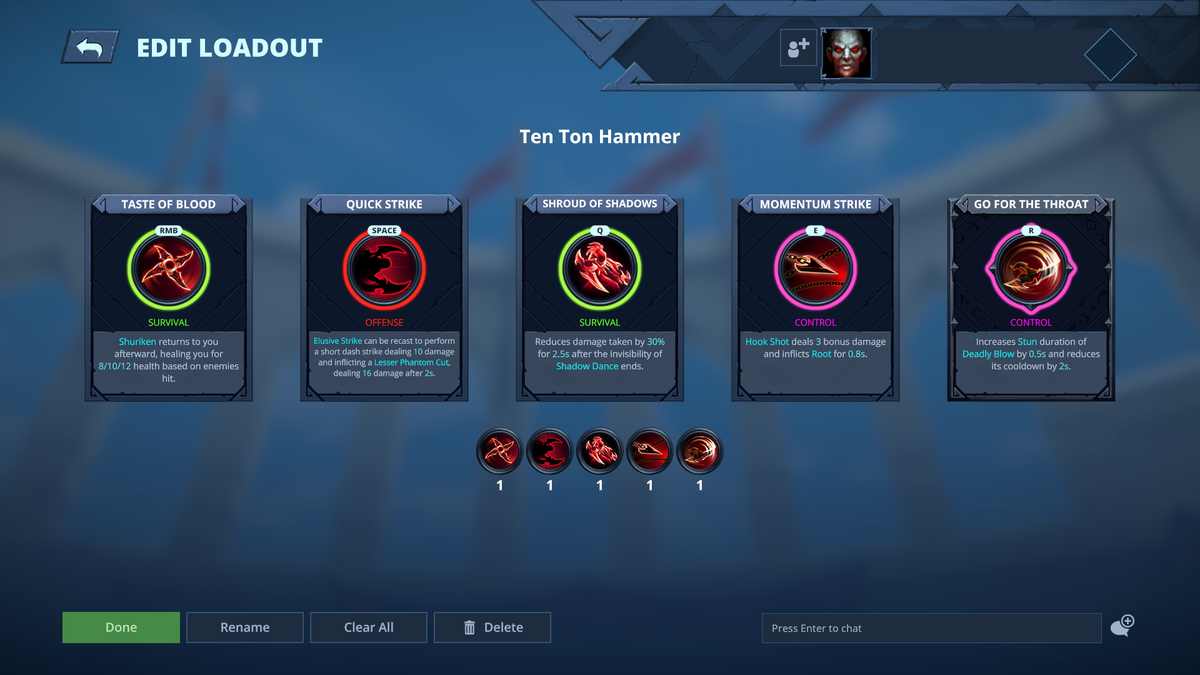 Taste of Blood provides some much needed sustain, and alongside Blood Kunai, allows her to heal herself based on the number of enemy targets Shuriken hits. If she taps both skills instantly, it's a fair amount of health return.

Jamila is weak when out in the open, so taking Shroud of Shadows, which reduces damage she takes after Shadow Dance ends is significant. Although it's short-lived, it allows her to trade with most Champions.

Building on Firing Mechanism, Momentum Strike causes Hook Shot to root those struck, while dealing additional damage. What makes this so good is the fact Jamila's fast attack speed ensures she can land a few basics before the root wears off. At the very least, the root often forces her opponent to waste their counter, allowing her to follow up.

Go For The Throat

Go For The Throat allows Jamila to use her Deadly Blow more often, while also increasing its stun duration. This level of control is never a bad thing.

These Hero Threat Levels (1 being lowest threat and 10 being highest threat) are to help you determine which enemy Heroes can give you a headache. For the Heroes listed here, take extra care as they're particularly dangerous for Jamila.

1. Your role as Jamila is similar to that of Croak. Get into combat - deal damage - and get out. Maximizing her burst, and ability to disengage is key to lopping health off foes.

2. Be aware that your final strike of Assassin’s Cut has a brief delay, and an obvious tell. Change direction if you think it’ll hit a counter.

4. Shuriken bounces between multiple foes, so if you are using it to poke, only do so when it can hit more than one target.

5. Shuriken casts near instantly, so use it the moment you engage to ensure enemy players can’t outrun you.

6. Learn to use Elusive Strike off walls. By default, it only causes damage. You have to wall jump to gain the incapacitate effect.

7. If you’ve incapacitated someone with Elusive Strike, use the time to escape or to guarantee your Deadly Blow. The stun from it allows you to then land a few basic attacks.

8. Most skilled players will attempt to bait Shadow Dance so that Jamila is without her counter. Play cleverly: don’t always jump to trigger it, especially against opening attacks that are likely to be cancelled.

9. Try to use Shadow Dance when it can’t be avoided. For example, Ruh Kaan using Sinister Strike towards you doesn’t allow him to change direction. Using Shadow Dance at that moment will ensure it’s hit by the AOE.

10. Always try to land your stealthed attack against a target. If you’re retreating, by all means avoid combat. However, Phantom Cut deals considerable damage and is undeniably strong.

11. Use the movement speed of Shadow Dance to reposition and engage a different target. Players don’t often expect it, and the surprise attack can prove deadly against enemies not anticipating your location.