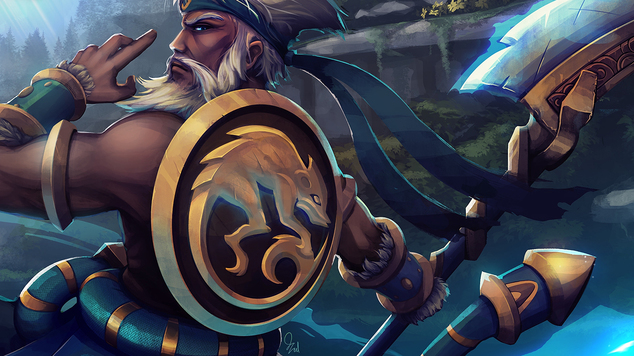 Shifu is undoubtedly one of the strongest melee Champions in Battlerite. With a kit that offers a counter, immaterial, a powerful incapacitate, sustain and burst damage - as well as a pull and leap - there’s little wonder he has remained a top-tier Champion for so long. What’s apparent with Shifu is that he’s fairly forgiving, with a variety of tools that can get him out of most bad situations. If he misses his counter (Kunju), he can use Fleet Foot, and if that isn’t available, he can Javelin onto scenery. That said, if played badly Shifu can die quickly. If played properly, he can be agony to fight against.

Expert in the martial art of Ni’Shu and master of the spear. A highly mobile and dangerous duelist, his extraordinary combat prowess culminates in a range of deadly melee attacks. Trained to hunt down his opponents and move like the wind, facing Shifu is like walking into a tornado of spearheads.

What I will say about Shifu is that to be truly effective, he needs thoughtful play and a deep understanding of opposing Champions. You need to know when to trigger your counter, when to dive with Javelin, when to sustain yourself or when to shut down an enemy and retreat. With his Impale also providing an exceptional tool for bursting the central Orb, Shifu is a safe pick during any draft.

Spear Slash (LMB) - Spear Slash doesn’t deal huge damage, but it does allow Shifu to swing quickly and stack up to three charges. Once he has, he’s able to utilise Impale for a burst of damage. As your bread and butter attack, you need to be using Spear Slash as often as possible to maximize your Impale up-time. 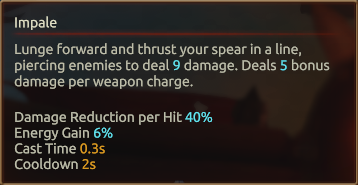 Impale (RMB) - Impale is Shifu’s high-burst ability that allows him to deal around 25 damage at maximum stacks. It takes 3 swings of Spear Slash to fully charge Impale, allowing Shifu to lunge forwards to strike a single opponent. At maximum charge Impale is often enough to steal the central Orb, or lop off a large amount of health. Just be conscious of the fact that Impale requires you to face directly onto an opponent, and without a telegraph you have to ensure you’re perfectly inline with your opponent. 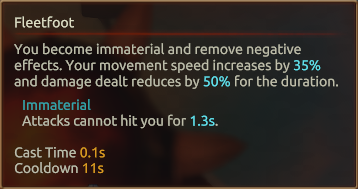 Fleetfoot (Space) - Fleetfoot makes Shifu immaterial, meaning he cannot be harmed during its duration. Interestingly, Shifu can still attack while Fleetfoot is active, but the damage is reduced by 50%. In most instances you’ll use Fleetfoot to escape, but it’s also invaluable for repositioning or playing aggressively. Hits during it still provide charges for your Impale, allowing you to deal high burst once it expires. 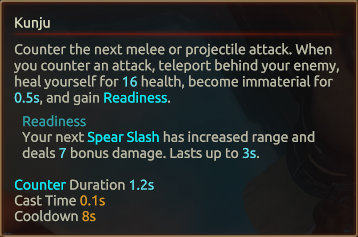 Kunju (Q) - Kunju acts like many other Counters, with the exception that it will automatically place you behind the foe who triggered it. Although you’re immaterial for a brief second upon landing, Kunju is predictable and most Champions will know you’re about to arrive and prepare for it. Despite that, you can follow Kunju with Fleetfoot, and use the bonus it provides on your next Spear Slash to then deal high Impale damage. 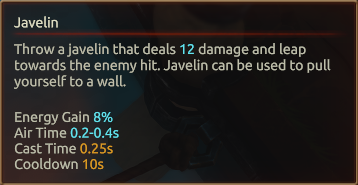 Javelin (E) - Javelin allows Shifu to close the gap on an opponent, giving him the ability to pull himself towards them, or towards scenery. With a lengthy cooldown, but with two charges, Javelin is all about engaging or retreating. Unfortunately you cannot afford to waste it, as a 10 second downtime will force you to use Fleetfoot or Kunju to get close - leaving you one form of mitigation down. 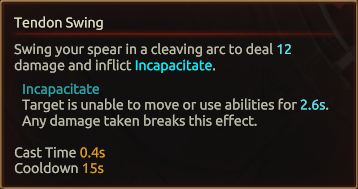 Tendon Swing (R) - Tendon Swing is probably one of the strongest abilities in the game, simply because it’s an instant wide arc Incapacitate. Lasting 2.6 seconds (what!?) and costing only 25 Energy, it can shut down whole teams who stand too close together. The duration is long enough to allow Shifu to reposition, choose another target, or steal an Orb. You should be using Tendon Swing regularly, and preferably on a high value target such as a Support, to deny the enemy team healing. 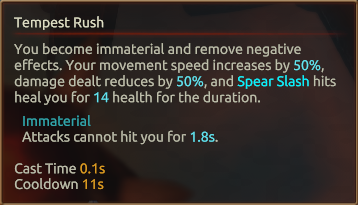 Tempest Rush (Shift + Space) - Tempest Rush is far superior to Fleetfoot, in the sense that it does pretty much the same thing, except allows Shifu to heal himself for 14 health every swing, while running faster. When you need to sustain yourself, or trade with an opponent before bursting with Impale, it’s amazing. You still gain the 50% movement speed bonus, and can often run rings round enemy players while obtaining health. Just be sure that you’re near your opponent when you start Tempest Rush, to maximize your health gain as you can only use two swings before it expires.

Harpoon (Shift + E) - Harpoon isn’t an ability you’ll use a lot, as it doesn’t pull players ALL the way to you, but instead pulls a fairly lengthy distance. While this can be good for displacing an enemy, typically your standard Javelin works absolutely fine as you’ll still be able to escape with Fleetfoot or Kunju even if you overextend. 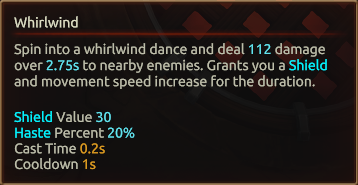 Whirlwind (F) - Whirlwind offers Shifu an amazing AOE Ultimate, that deals massive damage to all those around him. Although he moves somewhat slowly while casting it, as long as he starts up near an enemy they’ll take massive damage, or be forced to use an escape ability. If Shifu can time it correctly, during an enemies counter, or after they’ve used their defensive abilities ensures you can clean up. 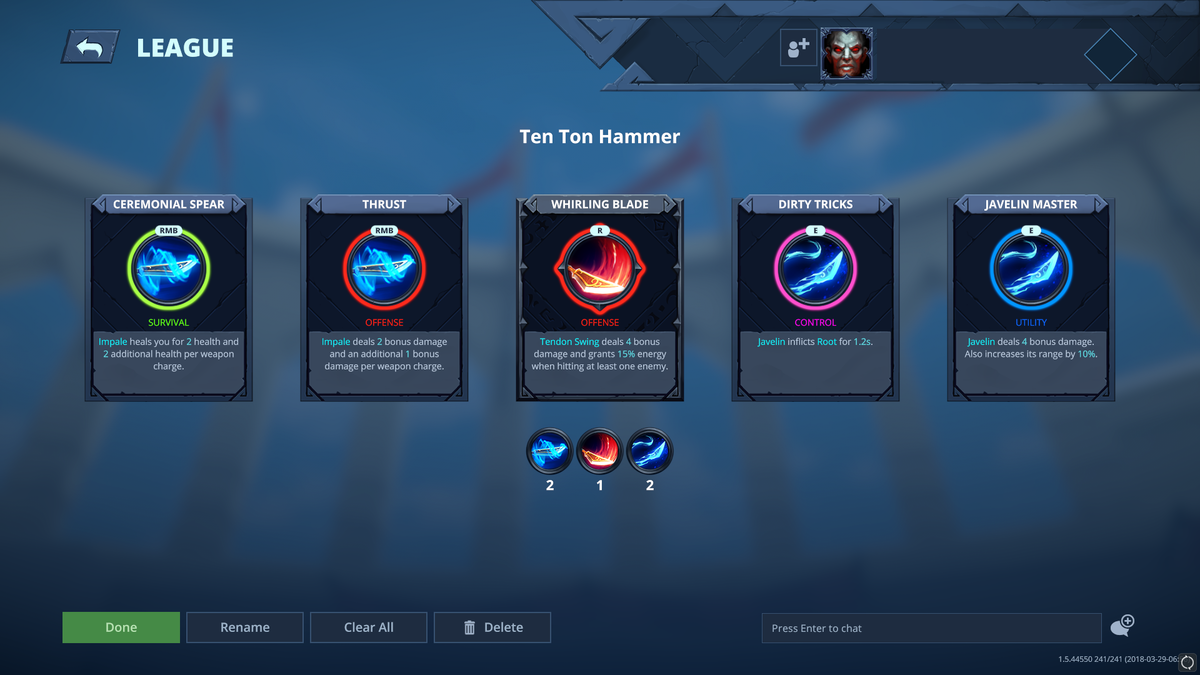 Ceremonial Spear allows Shifu to heal for significantly more, based on the number of weapon charges he has, when he eventually uses Impale. Each additional charge grants 2 health, while the initial attack also grants 2. For going toe to toe with Champions like Ruh Kaan, it helps Shifu considerably.

Building on Impale again, Thrust allows Shifu to deal 5 additional damage when his weapon is fully charged, bringing the total damage to 29.

Costing 25 Energy (or 1/4 of your total), Whirling Blade allows Shifu to gain a refund of 15 when he incapacitates an enemy. Considering he'll often snag multiple, Whirling Blade allows him to maintain his Energy - or gain more than he started with - ensuring he always has some available to use Tempest Rush.

A simple but effective Heroic, Dirty Tricks allows Shifu to root a player he hits with Javelin, allowing him to land several basic attacks or a clean impale.

Granting bonus damage and an increased throwing range, Javelin Master grants Shifu the opportunity to dive deeper, or escape much easier when he leads with his projectile. The bonus damage also ensures they take a little bit more damage at the start of his engagement.

These Hero Threat Levels (1 being lowest threat and 10 being highest threat) are to help you determine which enemy Heroes can give you a headache. For the Heroes listed here, take extra care as they're particularly dangerous for Shifu.

1. It's incredibly important to obtain three charges of your weapon, for maximum damage and health return on Impale. Swing regularly!

2. You will store your charges from Spear Slash as long as you like, until you use Impale.

3. Impale pierces enemies, meaning you can hit multiple enemies if they're lined up.

4. Try to use a fully charged Impale to steal the central Orb. If enemies are body-blocking it, you can still utilise the piercing element to snatch it.

5. Remember that with Battlerites, Impale heals you for a decent amount. If you're low, use it to top your health up.

6. A fully charged Impale will slightly knock enemies back. Take this into account when following up with further damage.

7. Don't waste Fleetfoot. If enemies bait your counter and it's on cooldown, you can die in seconds.

8. You can swing twice during Fleetfoot before it expires. Use this to gain weapon charges, ready to Impale on reappearing.

9. Fleetfoot is great for escaping, but it's also good for repositioning. You can play aggressively with it, but only if you can utilise Kunju or Javelin to retreat.

10. Kunju will always have you appear behind the last enemy who hit you. Even so, you gain movement speed and immaterial status on landing. You don't have to attack - you can change targets or reposition.

11. Use Javelin onto scenary instead of an enemy Champion if you're wanting to escape. Few Champions can catch your speed.

12. Always shut down high value targets with Tendon Swing, and line up a fully charged Impale just before it expires. It's a high burst combo that lops off a large amount of health.

13. Tempest Rush is great for sustain, and should be used regularly to trade with other melee Champions, as they can't hit you back during your swings.

14. Try to hold onto Whirlwind until an enemy has used their "out" or is using their counter. It can often ensure Shifu can clean up against anyone who's low health.