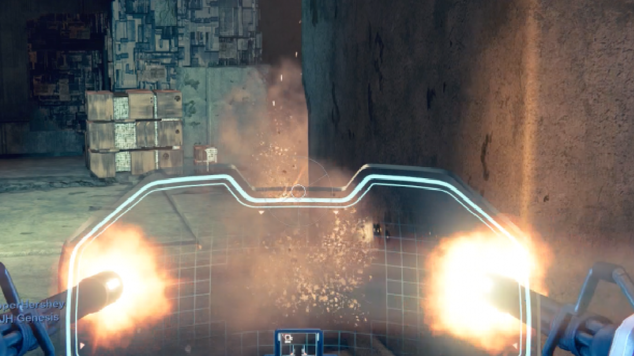 Destiny - Crucible Vehicles and Turrets
Your weapons are not the only tools available in the crucible. Master Destiny's vehicles and turrets to gain th

Guns and super abilities are great and all but what if you want to up your firepower and increase your mobility at the same time? This is where vehicles come in. In the Crucible there aren't a ton of rides to choose from but the ones that are available are great for racking up the mobile kills and of course, splatters. For those of you who want to firepower of a vehicle but are not so keen on mobility, many of the maps come with mounted turrets located at strategic points on the map. Before we get to the all mighty turret, let's take a closer look at the vehicles available in the Crucible.

The Pike is the best combination of mobility and firepower you will find in the Crucible. A piece of Fallen technology, the pike sort of resembles a beefed up sparrow and also comes with the same speed boost ability, extremely useful for closing the gap on enemies or making your way to safety when you've taken one too many hits.

In terms of armaments the Pike comes equipped with two mounted guns. When you first start firing the Pike's guns they shoot very fast, but the longer you hold the button the slower they fire, possibly because of overheating. It is therefore advisable to fire in bursts rather than long strings, and to close the gap on an enemy first to maximize your accuracy. Another excellent technique for the Pike is to strafe your targets instead of coming at them straight on. This will make you a harder target to hit while you dish out the damage.

The Pike is the most lightly armored vehicle (besides the Sparrow), so be sure and use it's speed and maneuverability to reduce the amount of damage you take. If you are facing off against a Pike your best bet is to use a Sniper Rifle to aim for the rider, or hit it with a grenade or other heavy weapon which will usually kill it in one shot.

The Cabal interceptor is sort of like the Cabal version of a Pike. Of course since it is produced by the cabal it is much slower but more heavily armed and armored than the Pike or Sparrow, and can make quick work of enemy guardians and other vehicles with a well placed hit. The Interceptor also has a boost, only this one is a more powerful, albeit shorter lasting speed burst which makes the vehicle into a very devastating battering ram. One ram with a speed burst will destroy anything from guardians to other vehicles and turrets.

The Interceptor is armed with two cannons attached to arms on the left and right sides of the vehicles, which fire exploding shells that do area of effect damage. You can only fire the guns one at a time while a short reloading period takes place in between, so be sure and have your shots lined up well in advance. Because the guns are on each side of the interceptor aiming them can sometimes be tricky, and the shot itself travels with a slight arc so maybe take a few practice shots if it's your first time out.

While the Interceptor is more heavily armored than the other vehicles it is quite slow moving and difficult to maneuver. Drivers of the Interceptor also have their heads and a lot of their bodies exposed in the drivers seat, making snipers a constant threat.

If you find yourself up against an Interceptor try to stay behind cover and on the high ground if possible. Your best bet to take it out would be any sort of heavy weapon/ grenade/ super, or to shoot the driver in their exposed cockpit.

Of course the mounted turret lacks any of the mobility the vehicles provide, but what it's missing it makes up for in firepower and protection to the user. Mounted turrets are not on every map, but the ones they can be found on usually have them in key locations with a good view of the battlefield.

Turrets are armed with two high caliber machine guns which are capable of quickly shredding a guardians shields ora  vehicles armor. These guns are attached to the mounted turret's cockpit which can swivel 360 degrees and adjust it's vertical alignment as well. Maintaining fire can be done for short periods of time, but the guns will start to overheat if held too long.

The cockpit of the mounted turret is much safer than the Interceptor or the Pike, with most of the front and sides covered by armor or semi-bulletproof glass. This glass can be shot out from sniper rifles or sustained weapons fire, leaving your head wide open to a followup shot. Other vulnerable spots are behind the gun and from above.