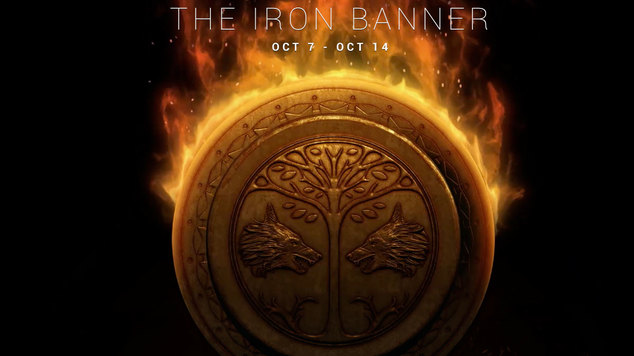 Bungie has already hinted that the Iron Banner will be returning every so often, so do not expect it to be a one hit wonder for hard core PVP players.

What is different about PVP in the Iron Banner?

Fighting in the new Iron Banner Crucible format will be very different than fighting in regular Crucible matches, for one very important reason: Gear Matters!

Unlike regular Crucible matches where everyone is normalized, you are not in the Iron Banner.  Sure, in the normal Crucible your base damage is normalized and upgrades still count, but here, it all counts.  This means that since everything counts, Light points also count, and therefore to compete you will need to be at least level 28, but to really stand a chance you will need to be 30.

Each of these bounties will each you either 50 or 100 points of reputation with the Iron Banner.

There will be three different ranks that you can earn with the Iron Banner faction.  Each rank will reward you in different ways. 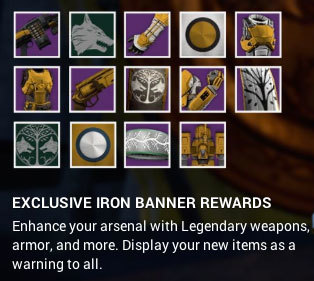 For players that like having visual options for their characters, these items will help provide even more options to chose from.

The first shader is available at rank 1 reputation which makes it fairly easy to get.  Even if you are not a fan of PVP, you should be able to get to rank 1 and get this new cool shader for your character.

Once you reach rank 3 with the Iron Banner, you will be able to purchase complete sets of Legendary gear for each of the three different classes.  These items all have a focus on PVP stats.

Probably the item that has hard core PVP players the most excited are the nine new Legendary weapons that are all made for PVP.  They all appear to focus on hitting hard, but requiring a lot of effort to hit correctly through a lack of stability.

These weapons will become status symbols for PVP players as they will be awarded for doing well in the Iron Banner version of the Crucible.  This means that most players will not be able to get a hold of any of them.

An interesting observation that several players have already made is that there are nine weapons, all with proper names such as Perun’s Fire and Felwinter’s Lie.  Is there a potential connection to “The Nine”?