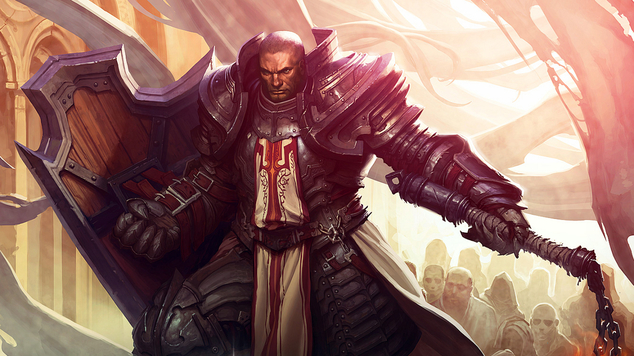 Crusaders are a new class to Diablo III, being added with the Reaper of Souls expansion.  They are however heavily based on a Paladin and should appear familiar to many players.  The are meant to be a darker and more grim version of a Paladin class, swearing vows to live and die for the Crusade.

Crusaders focus heavily on being the strong defensive champion in a group.  They use heavy armour and shields as well as flails and two-handed weapons to wade into combat protected by armour and their faith.  Crusaders can even use a two-handed weapon at the same time as a shield (with the use of a passive skill), providing them solid protection at all times.

Crusaders are best with groups since they can provide group wide buffs called laws, as well as protect others in the group with taunts and stuns.  With a shield in hand and holy righteousness on their side, not much can stop a crusader.

In Diablo III the Crusader class uses a resource called Wrath. Wrath is built up through the use of specific Crusader abilities and used up by other abilities.

The Primary skills all build up Wrath and these should be your main attack abilities, while your Secondary skills use up your Wrath.  Most other Crusader abilities are based on cooldowns, although some also require some Wrath to activate.

As with all Diablo III classes there is a strong theme to the armour that you will find for the class and an overall progression in the appearance.  For the Crusader that appearance does from a simple starting knight with bits of armour and some cloth through to a fully plated heavy knight.  Many of the armour sets look like they could be pulled from real life images from the Crusades, and higher level looks come from stylized movie interpretations. 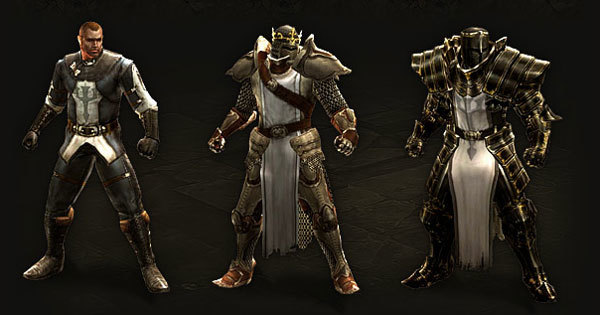 The only thing that I personally don’t like about the Crusader, has to do with the female version.  It is full out sacrilege!  Blizzard actually created an armoured female class that has a full set of armour!  There is no cleavage showing or bare mid-rift, she actually looks like she is ready for a fight.  That just isn’t supposed to happen in a fantasy game! In all seriousness though, it is a nice change, and the class looks really good as both male and female.

The Crusader class has 6 different skill types just like the other Diablo III classes.  They are:

Primary Skills – Used to generate Wrath through various attacks each granting 5 wrath.  These include Punish, Slash, Smite, and Justice.

Secondary Skills – You more powerful attacks that form your basic rotation, but these consume Wrath instead of generating it.  These include Shield Bash, Sweep Attack, Blessed Hammer, Blessed Shield, and Fist of the Heavens.

Defensive Skills – Help keep you and your party alive. They are Shield Glare, Iron Skin, Consecration, and Judgement

Utility – These are generic utility skills that cover taunts, mobility, and more.  The skills in this section include Provoke, Steed Charge, Condemn, and Phalanx.

Laws – These are dual purpose buffs that provide short term large benefit abilities when used as well as longer term buffs for you and your party after the short term effect expires.  They are the Laws of Valor, Laws of Justice, and Laws of Hope.

Conviction – These are various high damage long cool down abilities. They are Falling Sword, Akarat’s Champion, Heaven’s Fury, and Bombardment.

When gearing up any character in Diablo III there are multiple different paths that you can take.  For the Crusader those choices are basically aiming for maximum damage output or maximum survivability.

While levelling the main aim with any class is to kill enemies fast so that you can keep moving and earning more experience.  From levels 1-20 can be done by grabbing pretty much any skills you like as you get them.  However by level 30 and if you are playing higher than normal difficulty you will probably want to switch to something that allows you to burn through lots of enemies by keeping your Wrath levels high.

A solid leveling build is:

There are several good max level builds available that work.  Some focus on all out damage while other focus on survivability.  In general unless you always play with a group and are there to keep attention away from casters, it is almost always better to go for damage.

While there are melee and ranged damage builds, so far I have been preferring melee builds as the class just feels more melee based.  Ranged may be safer, but then there are other classes that do that.

A strong melee damage build that is good for both AOE damage for clearing monsters as well single target damage for boss fights can be based on the following: