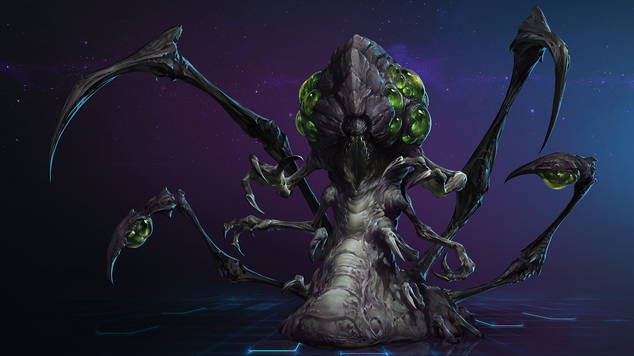 In this Abathur Build Guide, we provide an overview of its strengths, abilities and talents.

Abathur a very unique Hero. Rather than roaming the map like others, he uses Symbiote to help his team anywhere on the map, whether by soaking lanes or adding some damage and survivability to an allied hero. Using his body and Symbiote to soak lanes while his team looks to gain value elsewhere can allow Abathur's team to gain a large advantage.

Abathur can be a very challenging hero to play effectively due to requiring very strong map awareness and the fact that he plays very differently than any other hero. He also requires a team that knows how to play with him to be fully effective.

Locust Strain (Trait) - Locust Strain causes Abathur to create a Locust every 15 seconds. The Locust will leave his body and move slowly down into the nearest lane, attacking enemies in its way. The Locust has little health and very low damage, making it more of an ability you should watch for to make sure it is not giving away your position. If enemies are looking for you, move often to avoid them.

Symbiote (Q) - Symbiote is Abathur's bread and butter ability, allowing him to grant an ally a "hat". Using Symbiote removes your ability to move Abathur, and you can only Symbiote one thing at a time. Symbiote grants Abathur access to 3 abilities when "hatting" an ally. He can shoot a spine in a line dealing damage to the first enemy hit, deal damage to all nearby enemies, and shield the ally for a small amount. These abilities have a short cooldown but are not shorter than the cooldown on Symbiote itself, making it stronger to cancel Symbiote and cast it again on the same target after firing off all of the abilities. This also gives you the flexibility to choose a new target each time if the original target is too far to see value.

Toxic Nest (W) - Toxic Nest's are surprisingly strong and a valuable tool for Abathur. You can place them anywhere on the map within his rage regardless of vision and when planted, they'll turn invisible after a brief period. If an enemy touches them, they'll explode causing damage and revealing them briefly. Try to place them in area where enemies will want to rotate to gain that information and dismount them.

Evolve Monstrosity (R) - Evolve Monstrosity allows Abathur to target a minion or locust and evolve it. When he does so, the target will die and a Monstrosity will spawn at that location. The Monstrosity is amazing at pushing lanes, and it gains strength from killing other minions, to a maximum of 40. Unfortunately Monstrosity offers very little in the way of teamfighting and your team can struggle to win any objectives.

Ultimate Evolution (R) - Ultimate Evolution allows you to clone any other Hero, allowing Abathur to temporarily bring a lot of teamfight
potential. Although you cannot use a Heoric Ability, you can use your cloned Heroes abilities. Having a second of a powerful hero can give you an edge against the enemy team. 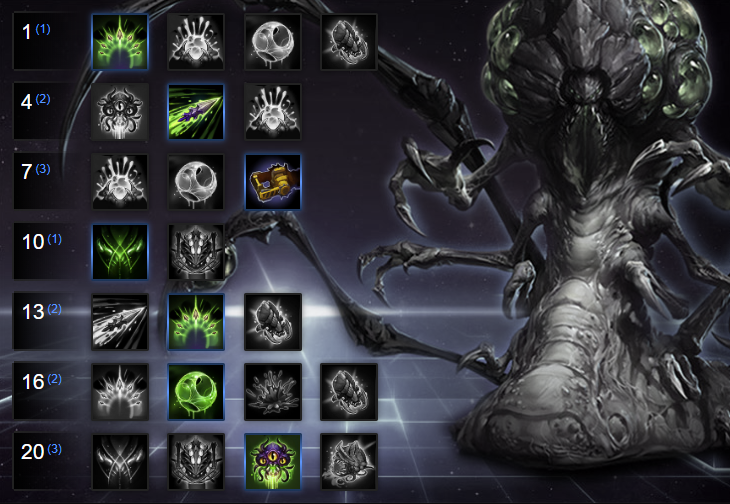 Pressurized Glands allows Spike Burst to have increased range and a shorter cooldown. This allows Abathur to hit enemies with Spike Burst when he is hatting an allied ranged DPS as well as make pushing lanes much easier.

Needlespine increases the damage and range of Stab by 20%, allowing Abathur to deal a little more damage to help allies or push lanes. A strong well rounded choice for most games.

Providing a 25% increase to attack speed, Adrenal Overload is very strong on heroes that benefit from attack speed greatly. Illidan is a great target due to his passive but keep in mind that looking to put too much on one hero can leave your team in a rough spot if enemies look to CC your hypercarry.

Part of the reason that makes Abathur so frustrating to deal with, is Mule. Unless the enemy team can finish off your structures, Mule allows Abathur to keep them intact for a very long period of time. A very strong ability that should be used as often as possible to keep your structures healthy and negate all poke damage on them.

Ultimate Evolution is a very powerful heroic that allows Abathur compositions to take teamfights. Due to the nature of his playstyle, the fact his body is never in a team fight makes any subsequent brawl a 4 versus 5, which if your team is smart, they will be avoiding until level 10. Just be sure to use it just before your tank looks to engage and force an all-in fight with it.

Soma Transference builds on Spike Burst, allowing it to heal the host based on how many enemy heroes hit. Factoring in the additional range offered, it can provide the Symbiote host with a significant boost of healing, allowing your melee heroes to survive for much longer.

Adrenaline Boost grants a 40% movement speed bonus to those who receive Carapace. This can allow allies to reposition, chase or escape. Keep in mind that this movement speed is lost if the Carapace shield breaks.

When you cast Symbiote on a Hero, you can now affect one other with Hivemind, dealing half damage and shielding. This allows Symbiote to be a real threat and equal to most heroes, allowing Abathur's team to take fights whenever.

These Hero Threat Levels (1 being lowest threat and 10 being highest threat) are to help you determine which enemy Heroes can give you a headache. For the Heroes listed here, take extra care as they're particularly annoying for Abathur.

This list of tips and tricks are just a handful of things we think will help your Abathur. We'll continue to add to the list as required and if you have any tips you'd like to share, let us know in the comments below and we'll place them here.

1. Abathur releases a Locust every 15 seconds. This can reveal your position.

2. Typically melee heroes benefit more from Symbiote due to the fact that they are in the middle of a fight, giving you options on who to deal damage to.

3. Remember to regularly change lanes to soak XP. Your Locust will continually move into the nearest lane, so if enemy Heroes are on the bottom, move to the top. You want to body soak as oft6en as possible but you need to have vision on the enemy team to avoid dying.

4. Abathur doesn't have a mount but does have a travel ability that allows him to burrow underground to anywhere on the map that is visible to him.

5. During any team fight, always try to use your Heroic on an allied hero that can cause the most impact. Heroes with weaker talents typically have stronger baseline abilities, which are great for your clone.

6. Key to playing Abathur is regularly rotating lanes. Use your Toxic Nests in bushes to grant you vision so you can quickly use your Z to travel to a new lane.

7. It's important as Abathur to body soak so that you're near to minions when they die. Since the experience changes, you will have to be in vision to gain the experience, requiring you to know the whereabouts of the enemy team before body soaking.