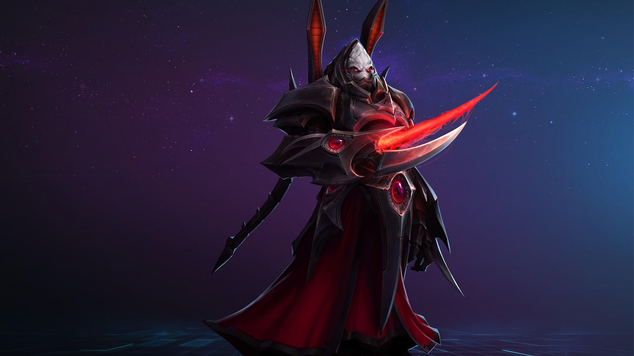 In this Alarak Build Guide, we provide an overview of his strengths, abilities, talents and matchups.

Alarak is a melee assassin that has many similarities to Kerrigan in terms of utility and strength. He can reposition enemies or himself to set up his Discord Strike to deal high damage and silence enemies hit. Alarak gains 100% extra damage and healing against Heroes from his trait, Sadism, with the possibility of increasing this value to deal even more damage.

Alarak can take a lot of practice to perform well consistently. His Discord Strike has a delay, and while you can guarantee the hit through Telekinesis, it is also his only form of escape, making positioning key to survival. Alarak is best when following up CC or pushing enemies into range of your tanks to give them a opportunity to lock the target down.

Sadism (Trait) - Alarak gain 100% more ability damage and healing versus enemy Heroes. This does not mean that he deals twice as much damage to heroes than other heroes but rather that he deals half damage to non heroes. However, any extra Sadism that he gains does make him more powerful than other heroes. If he can stay alive and stack Sadism, he can become a huge threat.

Discord Strike (Q) - Akarak's bread and butter ability. This will typically be Alarak's main source of damage. Due to the delay, it can be difficult to hit unhindered enemies if they are not right on top of you. Use Telekinesis to pull them into your Discord Strike or follow up on CC to guarantee the damage and silence.

Telekinesis (W) - Alarak's only means of controlling enemies around him, Telekinesis allows him to push or pull enemies. By default the push/pull isn't very far but it's often enough to disrupt the enemy or reposition them to a place they would rather avoid, such as into your Discord Strike. Be conscious of the fact that Telekinesis has a lengthy cooldown and although you can move while casting it, it's easy to miss if you are not used to vector targeting.

Lightning Surge (E) - Lightning Surge deals damage to an enemy and all enemies between you and your target as well as healing you per enemy hero hit. Try to aim for a Hero at the back of the fight, so you can hit multiple heroes, dealing more damage and healing much more.

Deadly Charge (R) - Deadly Charge has a brief channel before allowing Alarak to leap forwards dealing high damage to all those in a line. This is a very all-in heroic, placing you in a very poor position to attempt to deal high damage. It can be very powerful but keep in mind that trading 1 for 1 is unfavorable for Alarak since he also loses all of his Sadism when he dies.

Counter-Strike (R) - Counter-Strike causes Alarak to become Unstoppable and Protected for 1 second. If he is hit in this time, he'll send out a shockwave forwards that deals high AOE damage to those in front of him. This will most often be used to save yourself from some deadly CC or damage that enemies are throwing at you, with a nice bonus of some damage. 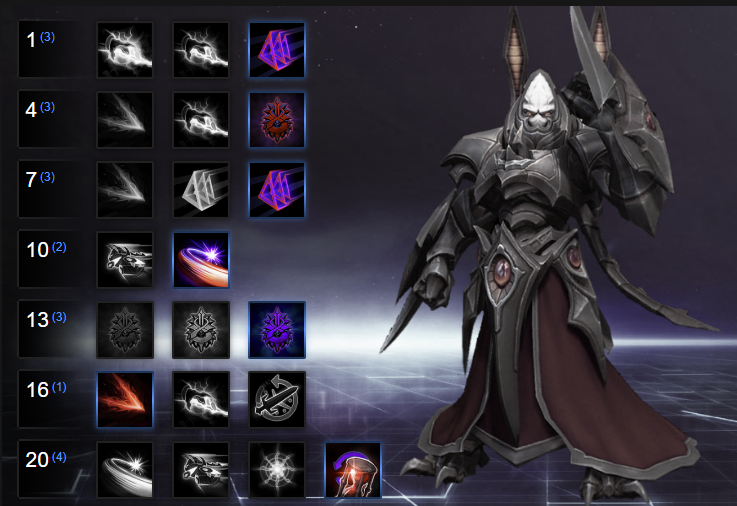 Ruthless Momentum allows Telekinesis to cooldown 75% faster while Alarak is above 80% health. This significantly recudes the downtime between your combos and it is fairly easy to stay at high health due to Alarak's slower playstyle.

Show of Force allows Alarak to deal extra damage and gain Sadism when he hits an enemy hero with 3 abilities in 2 seconds. Since Telekinesis and Discord Strike are almost always used together, you just need to follow up with a Lightning Surge to land your 3 hits, adding some consistent extra damage and scaling your Sadism.

By default Alarak's Telekinesis has a short range and doesn't pull particular far. Taking Applied Force allows you to pick on enemies that are playing farther back. It's fantastic for grabbing enemies who think they're safe. It might reduce your Sadism by 10%, but the utility it brings is very powerful.

Dissonance increases the silence duration of Discord Strike by 0.75 seconds. This can be very powerful against teams that all play within range of Telekinesis or if you need to lock down a certain hero for longer.

Counter Strike makes Alarak immune to damage and Untoppable for 1 second. If he was attacked during this second, he will send out a shockwave that deals high damage in a triangle in front of him. Think of this ability as an Ice Block with an added bonus of some damage. It is great for dodging CC or damage coming your way.

Rite of Rak'Shir is a targeted talent that allows Alarak to mark one hero. When he does, for 300 seconds every Discord Strike he lands against that target increases his Sadism by 3%. If he kills that player, he gains 5% Sadism and the cooldown is set to 10 seconds. This can quickly allow you to gain Sadism. Don't get too focused on gaining Rite of Rak'Shir stacks as if you mark an enemy tank looking to farm them for Sadism, you can quickly lose a fight since you were busy using your abilities on a high health tank rather than the kill target.

Lethal Onslaught allows Alarak's auto attacks to benefit from half of Sadism's damage bonus for 4 seconds when he hits an enemy hero with Discord Strike. This can add a ton of damage to the kill target or allow you to smack the enemy tanks very hard.

Hasty Bargain allows Alarak to permanently reduce his Sadism by 4% and reset the cooldown of his basic abilities. This can add a massive amount of burst damage to any target. Most games end very quickly after a team hits level 20 and the reduced Sadism is rarely going to ruin you.

Last laugh allows Alarak to teleport to a location around him. The downside is that if you don't land 3 basic abilities within 4 seconds, your health will drop to 1. It is best used as an escape tool to preserve your Sadism. If you are really daring, you can use it to get on top of an enemy hero to finish them off, but keep in mind if you do not land your abilities, you will be set to 1 health and most likely die.

These Hero Threat Levels (1 being lowest threat and 10 being highest threat) are to help you determine which enemy Heroes can give you a headache. If a Hero is listed in this Alarak build, take greater care to play around them.

This list of tips and tricks are just a handful of things we think will help your Alarak play. We'll continue to add to the list as required and if you have any tips you'd like to share, let us know in the comments below and we'll place them here.

1. Remember that Sadism increases by 3% for every takedown your team achieves, but this bonus is lost on death.

2. Sadism works against heroes such as Murky and allows you to stack quickly, if you can kill him quickly.

3. Don't be too worried about taking talents that reduce your Sadism. A handful of kills, or Sadism boosting talents can quickly see you surpass your base 100% bonus.

4. Discord strike deals damage in a triangle and two smaller perpendicular triangles. If you aim is 90 degrees off, you can still sometimes hit the enemy.

5. There's a very brief delay before attacking with Discord Strike. You can be interrupted in this moment. If you are, Discord Strike is not put on cooldown.

6. You can use Telekinesis to push yourself away from enemy players. Just press Alt + W for an instant shunt in the direction you're facing.

7. Although its primary use is to pull players, Telekinesis can be used to protect a teammate who's under attack.

8. Try to hit as many players as possible with your Lightning Surge, which typically means aiming at the furthest target at the back of a fight.

9. Counter Strike makes you immune to all damage. Even if you won't kill anyone with the after-shock, it can often save your life.