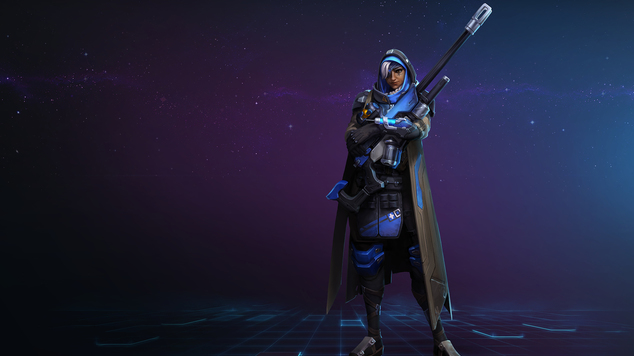 In this Ana Build Guide, we provide an overview of her strengths, abilities, talents and matchups.

Unlike her peers, Ana is a skill-shot based Support. She relies on her aim to not only deliver healing, but to also apply her Sleep Dart and Biotic Grenade. The fact that a miss with any of her abilities can be incredibly punishing leaves Ana requiring a player who not only has good aim, but also one that can position effectively to get the most out of her abilities.

Ana has very little self-sustain, and only one form of crowd control leaving her incredibly vulnerable to most Heroes, and if she does use Biotic Grenade for a quick splash of healing, she then faces a lengthy period where she cannot AoE heal her team, or reduce the healing of her opponent.

With correct positioning however, Ana is not only difficult to pin down, but she can comfortably sustain a team and pressure her opponents. Her long ranged abilites allow her to position farther from the fight and still be effective.

Shrike - Shrike has two functionalities. The first is to allow Ana's auto attacks to apply damage over time to her targets, stacking up to 5 times, for a large dose of damage over time. A percentage of the damage this DoT deals will also heal Ana. Ana's increased range, combined with the speed of her shots allows her to pepper opponents assuming you have your tanks with you to peel. Maintaining 5 stacks on a target isn't always possible, but with practice you can comfortably spread 3 or 4 across multiple Heroes for group-wide pressure. It's also important to note that Shrike will not wake a Hero who has been put to sleep by your Sleep Dart: they'll take damage, and remain incapacitated.

Finally, when activated Shrike takes on additional bonuses, granting Ana's Healing Dart and Sleep Dart to pierce a target, allowing you to hit two targets each shot as well as increase the range of these two abilities. However, it does slow Ana's movement speed. Remember to turn Shrike on and off, depending on the situation.

Healing Dart (Q) - Providing an almost instant heal from range, Healing Dart travels through minions and mercenaries and heals the first Hero it comes into contact with. If she is aiming down sights these darts can pierce one ally, allowing you to heal two allies with each shot. The low cooldown of Healing Dart, combined with its range, allows Ana to send heals where she sees fit. Try to position yourself where you can easily heal two allies with every shot. Sometimes your allies can help you out and stand more in a line if they really want healing.

Biotic Grenade (W) - Providing instant AoE healing as well as a healing buff to all allies affected by her Biotic Grenade, increasing the healing they receive by 25% for 3 seconds. Not only that, but with Biotic Grenade denying all healing to enemies struck by the grenade, it can be exceptionally powerful when used offensively. On a Hero that's low health, it can ensure they die, as any attempts to heal them will be instantly denied. Just be sure to save Biotic Grenade for when you need a quick heal, deny a heal that would save an enemy Hero, or for yourself. Don't just waste it for a burst of damage or healing when your rifle and Healing Dart are more than good enough.

Sleep Dart (E) - Sleep dart is a very powerful ability that can shut down enemy heroes for up to 3 seconds. This can be used to peel or set up a kill. Landing a Sleep Dart before a fight erupts can set up a kill target and allow your team to collapse on an enemy. Once the fight has begun, try to use Sleep Dart to slow down the enemy DPS that are far enough from the fight to stay asleep. If there are no good targets or your tank is struggling to peel, you can save Sleep Dart to slow down an enemy's advance.

Nano Boost (R) - As the reverse of Lt. Morales' Stim Drone, Nano Boost is designed to be used on ability focused Heroes. Restoring 200 mana, alongside a 30% Spell Power increase, and a 150% cooldown reduction, it allows Heroes such as Li-Ming, Jaina and Kael'thas to deal massive damage at an incredibly fast pace. It should be noted that Nano Boost can be strong on any hero where their abilities suit the battles. If your team needs more peel or CC, don't be afraid to Nano Boost your tank and let them throw out a ton of CC. A fun pairing is Kael'thas's Pyroblast and Nano Boost. It will hit hard enough to instantly kill many low health Heroes.

Eye of Horus (R) - Allowing Ana to globally snipe enemy Heroes, she can fire at allies or enemies to heal, or deal damage. The damage at level 20 is fairly significant (around 380 per shot), and Ana can fire each round very quickly. What's particularly powerful about Eye of Horus is the fact it allows Ana to participate in any skirmish anywhere on the map. A great choice if your team likes to fight in multiple locations at the same time. 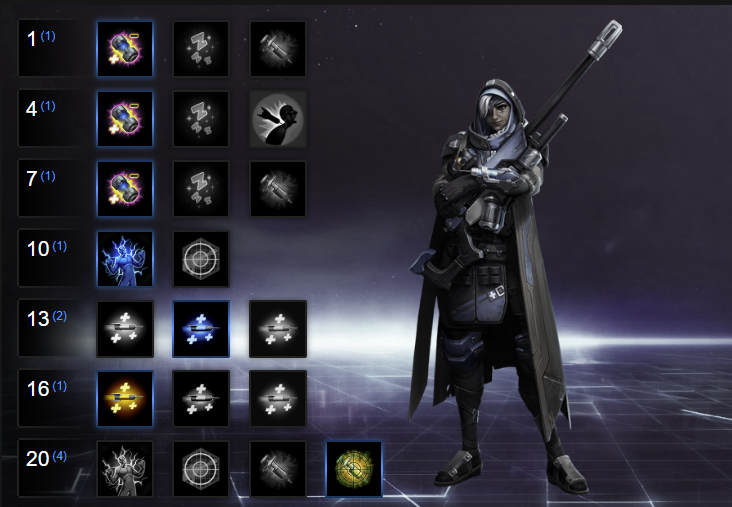 Contact Healing is a simple but effective Talent. It allows Ana to heal with her grenade for 30% more, for each enemy and ally hit. A solid amount of burst healing potential that builds into your level 4 and 7 Talents.

Biotic Enhancements increases the bonus healing duration by 50% and reduces the cooldown of your grenade by 2 seconds. When landing Healing Darts while aiming down sights, this boosts her healing output immensely.

Anti-Healer increases Biotic Grenade's radius, effectively allows Ana to heal her entire team with Biotic Grenade while also snagging the enemy team at the same time. It also increases the duration of the healing reduction. A real nuisance for the enemy healers.

Every Hero has some form of ability, so having the power to reduce it by 10% per stack of Shrike is huge. A 50% reduction against a Hero such as Kael'thas or Li-Ming, will seriously hurt their damage potential. Your basic attack range allows you to keep your stacks up fairly easy.

If you have a strong mage on your team (Jaina, Kael'thas, Gul'dan, or Li-Ming), Nano Boost can be exceptional. This can greatly increase the DPS of a mage on your team. It can also be used to grant your tank increased CC capability if your team is having trouble locking down targets or peeling.

Most teams will have some form of slows that is applies very often. Against these teams the root and slow removal on Healing Dart is incredible and adds some extra healing.

The stun removal and bonus armor will give the enemy team a very hard time trying to lock down a kill target.

Speed Serum adds some extra movement speed to allies that are healed by Healing Dart. This can be great for allowing your allies to keep on enemies or make distance. Keep in mind that your allies will becomes slightly harder to heal if they run faster and you will have to aim your Healing Darts accordingly.

Sharpshooter boosts the healing of Healing Dart by 5% for each ally you hit without missing. Considering when you aim down sights, your Healing Darts pierce, it's super easy to reach the 50% increase cap, and ensures your healing output is ridiculous.

Active Reload allows Ana to grant herself 3 charges of Healing Dart, allowing her to fire 3 Healing Darts as fast as you can mash the Q button. This can offer some excellent burst healing.

Dynamic Optics grants Ana increased attack speed and attack range while she is aiming down sights. This can allow you to deal some significant damage from a very long range.

Lets any Hero affected by Nano Boost heal themselves for 50% of the damage they deal. When used on Heroes such as Jaina or Kael'thas, it returns a ridiculous amount of healing, ensuring that Ana can focus her attention elsewhere. It can also be used on certain bruisers such as Sonya as the extra healing will make them very difficult to kill.

This list of tips and tricks are just a handful of things we think will help your Ana play. We'll continue to add to the list as required and if you have any tips you'd like to share, let us know in the comments below and we'll place them here.

1. Positioning is incredibly important for Ana. Be sure that you're always maximum distance away from your allies, and the enemy.

2. Try to regularly change positions so that you have sight-lines to land your abilities and attacks against allies and enemies.

3. Ana has an incredibly fast rate of fire, especially when stutter-stepping. Use this to stack Shrike quickly against multiple Heroes.

4. The Shrike dot will not break Sleeping Dart!

5. Healing Dart will pass through minions: there's no need to move if they're in the way.

6. Always change positions so that you can heal your front-line Warrior. Try to flank from the sides, rather than sitting immediately behind your team.

7. You have to wait 2 seconds between firing Healing Dart. Try to rotate who you heal, so that everyone on your team is topped up. Don't keep healing just one player (unless they're being heavily focused).

8. Always remember to turn Shrike on and off, depending on the circumstance. Need to move quickly? Off. Need to cleave enemies and allies? On.

9. Biotic Grenade reduces all healing of enemies affected by its blast by 100%. Use this to shut down large heals such as Rehgar's Ancestral Healing.

10. If a team fight is going your team's way, use Biotic Grenade aggressively to ensure those at low health won't survive your push.

10. Remember that Biotic Grenade boosts the healing received of those affected by 25%. Use it first, followed by Healing Dart, on a target under heavy fire.

13. Sleep Dart has a slight delay before it is fired. Take this into account when aiming.

14. Sleep Dart has a huge cooldown (14 seconds). You honestly can't afford to miss. Go to the training room with unlimited cooldowns to practice your aim.

15. Eye of Horus is brilliant if you want 8 rapid shots of healing for your team, or to finish off low-health Heroes. Try to use it from a hidden location, as long as your team are giving you vision. Once your ammo is depleted, be sure to quickly rejoin your team.