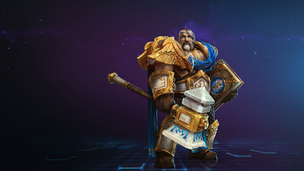 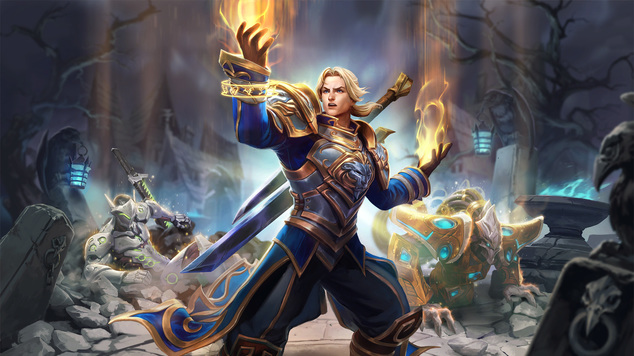 In this Anduin Build Guide, we provide an overview of his strengths, abilities, talents and matchups.

Anduin is a solid well rounded sustained healer with a root to follow up CC. He has strong AoE healing in Divine Star and solid single target healing in Flash Heal. If enemies stray to far or get caught in CC he can use Leap of Faith to pull them out of harms way. If you are looking for a well rounded healer that can fit into most compositions, Anduin is a great choice. Overall Anduin is a solid healer that you can't go wrong picking up.

Leap of Faith (Trait) – A powerful Trait, Leap of Faith allows Anduin to target an ally within a large radius and pull them towards him. When pulled, those allies are also granted Unstoppable. Whether grabbing someone from danger, or pulling a Warrior to you when you need peel, it's definitely one of the strongest Trait's in the game, but comes with a fairly long cooldown.

Flash Heal (Q) – A point and click heal with a low cooldown, Flash Heal has a fast cast-time and can be used often (it's also fairly cheap on mana). Its range is pretty long, but you have to remain stationary for a brief moment while you cast it. Make sure you keep your distance from enemies as they can use your cast time as a reason to aim abilities at you.

Divine Star (W) – An ability that allows Anduin to hurt enemies, and heal allies. After heading out and dealing damage, it'll boomerang back to heal his team in a wide path. Aim to hit as many enemies as possible for a larger heal but it is fine to throw it when no enemies are around for a decent AoE heal.

Chastise (E) – Chastise is a skillshot root that lasts for a short duration. It'll always hit the first enemy Hero it comes into contact with, and allows you to escape, or follow up CC. Try to position where you can follow up CC but are not in immediate danger. If you are threatened, you can throw it to force enemies back or be rooted.

Holy Word: Salvation (R) – Salvation is a very powerful heroic. It provides complete immunity to all damage to allies in its radius, while rapidly healing. Although its duration is short (3 seconds), it can instantly mitigate a team dive or when Heroics are triggered. Just ensure that when you cast Salvation, you are away from enemies that can stun you as it will cancel the effect.

Lightbomb (R) – An offensive Heroic, and one that you will want if the enemy team has a lot of ways to cancel Salvation. Lightbomb allows Anduin to apply a bomb on an ally which can stun multiple targets when it explodes. Not only that, but the recipient of Lightbomb will also be shielded. Ideally you want to cast this Heroic on your front-line so that they're in amongst the enemy team when it goes off but it can also be used to peel. 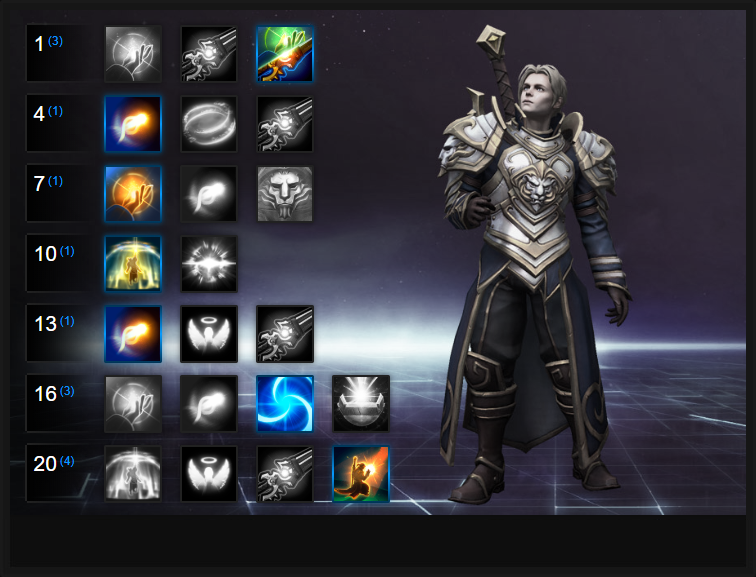 Bold Strategy allows you to obtain the other two Level 1 Talents, for the cost of a 2 second increase to the cooldown of Flash Heal. It's well worth it, as your Renew will gain a heal over time after you auto attack an enemy as well as all of your damage to enemy heroes will proc a small heal to a nearby ally hero.

Moral Compass is a solid Talent that always sees some value. It allows Anudin to poke from afar, dealing additional basic attack damage to those near the apex of his Divine Star. While the damage is reduced to 70% of your basic attack, it's still a solid amount of output that can hit multiple opponents quickly. These attacks are real basica attacks and proc the Renew portion of Bold Strategy, making your next Flash Heal heal more.

A simple Talent that provides Anduin with a little more sustain for himself, Binding Heal simply returns a small amount of healing to himself, every time he uses Flash Heal. Great for keeping your health pool topped up, without having to waste Flash Heal on yourself.

Power word: shield gives Anduin a shield whenever he casts Divine Star. This can provide some mitigation if against a burst composition. If you think you are going to take damage, enemies are likely close and will be easily hit by Divine Star, increasing the heal it provides as well as giving you a shield.

Holy Word: Salvation offers mitigation, and AOE healing, and can cancel out any opposition dive in an instant. Be wary of enemy CC as enemies can quickly cancel it with a stun, silence or displacement.

Alternative - Lightbomb
Lightbomb is a great option if you have an ally that wants to be in the thick of things or the enemy team as multiple ways to cancel Holy Word: Salvation. The AoE stun can turn teamfights quickly and forces enemies to spread out.

Enchanted Boots - Lion's Speed offers Anduin some added mobility. When your Trait is on cooldown, you gain a total of 15% movement speed, allowing you to move a little more freely in a team fight. This can be great for positioning for a strong Divine Star or looking for the right Chastise.

Desperate Prayer is an active Talent that allows Anduin to heal an ally for a very high amount, but makes him unable to act for 2 seconds. Not only that, but it also places Flash Heal on a 10 second cooldown. Basically, it's your "oh, shit!" button, and should be used only when you need a massive heal instantly or have nothing left to save an ally.

Glyph of Faith grants Anduin a second charge of Leap of Faith, allowing him to save two allies or one ally twice. Since the cooldown on Leap of Faith is so long, it can be great to have another charge in case you had used it recently.

These Hero Threat Levels (1 being lowest threat and 10 being highest threat) are to help you determine which enemy Heroes can give you a headache. If a Hero is listed here, play a little safer.

This list of tips and tricks are just a handful of things we think will help your Anduin play. We'll continue to add to the list as required and if you have any tips you'd like to share, let us know in the comments below and we'll place them here.

1. Positioning is crucial to not only land Chastise but also to pull allies with Leap of Faith to a safe position.

2. Chasitse is very slow. It is much easier to wait for your team to CC enemies and follow up on their CC than try to land a Chastise on unhindered enemies.

3. Flash Heal has a short cast time but you can cancel it with a move command if you are in danger.

4. Leap of Faith makes allies Unstoppable and can be used like a cleanse if needed.

5. Anduin has strong sustained healing but can struggle to heal burst damage in the early and mid game. Use Leap of Faith to help allies avoid burst before it happens.