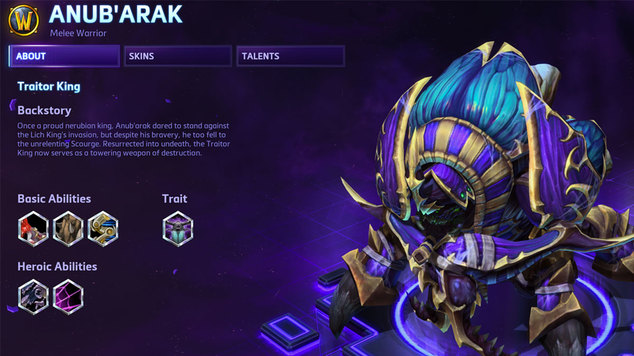 Anub’arak is a melee warrior character in Heroes of the Storm that comes from the Warcraft universe. While described as a melee character, and he is, a lot of what makes him powerful is actually his ranged abilities. Anub’arak can be built in two main ways that both offer support to the team as well as warrior tanking power.  He can be built to offer more crowd control (CC) or more damage output.  No matter which way you go though, don’t expect Anub’arak to win any damage races, as his overall damage output is low.

Impale (Q) [12 second cooldown] – This is a skill shot ability that deals damage to everything in it’s path as well as stunning targets for 1 second.  It can be used to push lanes hitting multiple minions at once, or to stun enemy players to help kill them off or to catch them while they are running.

Harden Carapace (W) [8 second cooldown] – Grants you a small shield that will prevent some damage, which is great due to your low healthpool.  Being on a low cooldown helps with health and with beetles (see passive trait below).

Burrow Charge (E) [14 second cooldown] – This ability is an amazing one that provides Anub’arak much of his power.  It allows him to burrow underground and charge into or out of combat, passing under most obstacles.  While submerged you can activate it again to emerge where you currently are.  You deal damage to enemies above you when you surface and briefly stun them.  This can be used to go in for a kill, help stun enemies, or to escape with your life, make use of it as often as you can.

Locust Swarm (R) [100 second cooldown] – This is the first of the level 10 options.  When activated you deal damage to all enemies around you as well as healing a portion of the damage you deal.  This provides a lot of damage in a team fight later in the game as well as helping you stay alive.

Web Blast (R) [60 second cooldown] – This is the second of the level 10 options. This ability wraps an opponent in webs for up to 8 seconds, which makes it one of the longest CC options in the game.  It can be shorted significantly though, because it is targetable by enemies as well, meaning they can set their captured ally free by focusing down the webs.

Scarab Host (Passive) – This passive trait spawns a beetle near you every time you use an ability.  They last for 10 seconds and deal a small amount of damage. They are not controllable though and have very low health, however since they are essentially free, it all adds up over time.

Every hero in Heroes of the Storm has several talents that they gain access to as they level in each match.  Rather than look at every talent here, we will focus on the best at each level for the two most popular builds for Anub’arak.  Those builds are a CC team build or a damage based beetle build.  Both are viable in the game, and which you should go with depends on your team makeup.  The CC team build is generally the way to go, but if you have a lot of CC in your group then helping with damage can be fun.

At the first level there are a few good options for each build type.  If you are focusing on CC and helping out your team then Extended Spikes is the way to go, as it helps reach out just a little further to catch players with a stun.  If you want to go with a beetle based build then Assault Scarab is the way to go as it allows your beetles to deal more damage.  Regeneration Master is also a good talent for a tanking build since it provides quite a bit of health regen over time, especially when you focus on collecting orbs.

There is one solid choice here for each built type.  To help with your team and to get into and out of places better, take Underking.  20% extra reach is a lot and allows you to gank enemies further away, or to escape just a little bit further.  The 2 second reduction to the abilities cooldown also helps significantly.  For Beetle builds, the Legion of Beetles talent here is a must, and in fact is sometimes worth taking for tanking builds as well as the beetles can get in the way of enemy abilities and help deal damage.  This ability spawns a beetle every 8 seconds in addition to the beetles you generate by your use of your talents.

This level grants a plethora of useful talents.  For CC builds there is Bed of Barbs, which allows your Impale spikes to persist for a few seconds, dealing damage to and slowing any enemy that crosses them.  For beetle based builds you can get Leeching Scarabs which grant health back to you for every hit your beetles do.  This adds up to a lot of healing over time when combined with other beetle abilities.

There are also two other talents that work well with either build.  Shed Exoskeleton grants you an extra 25% move speed for 3 seconds when you put your shield up.  This helps get into or out of combat quite a bit and should not be overlooked. Lastly, there is Mercenary Lord, which boosts damage of siege or bruiser mercenaries near you by 50%. If you are playing with a well coordinated team and plan on supporting your mercenaries as you capture them, then this ability adds a lot of damage!  If you are playing in a random group, where very few players understand how much mercenaries can do when supported, and leave them to die, then this talent becomes worthless.

At this level you gain access to either Locust Swarm or Web Blast.  The best choice here is Locust Swarm as it adds so much to Anub’arak.  It helps deal a lot of damage as well as healing your while doing it.  Web Blast has the potential to be good, however since the web has so little health, it can be killed off so fast that it rarely affects the battle.  With a lot of coordinated team effort it can be amazing, but the effort to make it really work often outweighs the result.

This level has a few good options, the first is Chitinous Plating and is the one I take most often. It boosts your shield ability by 40% which can really help keep you alive.  The other two abilities are really situational, but can be extremely useful against certain matchups.  Burning Rage can be extremely good against groups with lots of melee that will be around you or against any stealth characters as it will damage them and reveal them if they get too close.  Spell Shield is very strong against teams with high spell damage characters (like Nova, Jaina, Falstad, etc) as it provides a lot of damage reduction to their burst damage abilities.

This tier of talents has several good options. If you are playing more for CC and tanking, then Blood for Blood is the way to go as it can deal a lot of damage against high heath tanks like Stitches, Diablo, or Arthas, or even just help finish off a wounded assassin.  Since it also heals you, it is even better.  If you are doing a beetle build, then Beetle, Juiced is an obvious winner.  It boosts the damage of your beetles by a ton if they manage to kill something.  When pushing a lane in the late game, this can really add up to a lot of extra damage.  Lastly for either build, if you find yourself playing against a large number of characters that are heavily auto attack dependant, the Imposing Presence can be insanely good and boost your teams survival to crazy levels, since your opponents will be attacking 50% less.  Once they realize this though, they will stop attacking you.

Your top level talents provide some really good options and leaves it up to your play style to choose.  Assuming you took Locust Swarm at level 10 then Hive Master is a very good choice as it grants constant healing and damage.  My preference though is either Hardened Shield or Rewind.  If you are going for tanking ability, then Hardened Shield is amazing, especially if you use Locust Swarm at the same time.  It prevents a lot of damage and your locusts will heal far more damage than you take during that time.  The other option is Rewind, which allows even more damage output, CC output, beetle output, and move movement and escapes.  Time correctly Rewind can help your team cleanup in a team fight late game.

Anub’arak is a lot of fun to play as he is tank that offers a high skill ceiling.  He can be played multiple different ways and always adds a lot to the team.  Better yet, to me at least, is that he is underrated due to his low base damage, and the enemy team often overlook how dangerous he can be.

Once the game reaching the middle levels and you have access to Locust Swarm, you can become even more aggressive in lanes and when taking mercenary camps.  Make sure you are supported though when enemies are around as your damage output will not be high enough to kill them off quickly.

Once the late game arrives you should have all the tools you need to help setup kills in team fights by stunning enemies and picking off fleeing opponents.  Additionally your beetles will be dealing damage to players and minions around you.  At this stage a lot of your role in a team fight will be to keep enemies CCed whenever you can and to body block players from fleeing.  This means getting in their way so that they can no run, and allowing your team mates to get the kill.  Anub’arak is amazing at this due to his Burrow Charge ability, which allows you to charge past your opponent and come up on the other side of them to keep them closer to your allies for a few seconds longer.

While Anub’arak benefits from being played aggressively, and being in close, it  is critical to remember that he has a low heal pool.  He can be focused down quickly, and therefore you need to be aggressive, but cautious, which are opposites and hard to balance.  Essentially, make sure you don’t leave yourself with no escape routes, and make sure that you do not over extend from your team.  Once you learn how to push, but stay safe, Anub’arak is an amazing character.