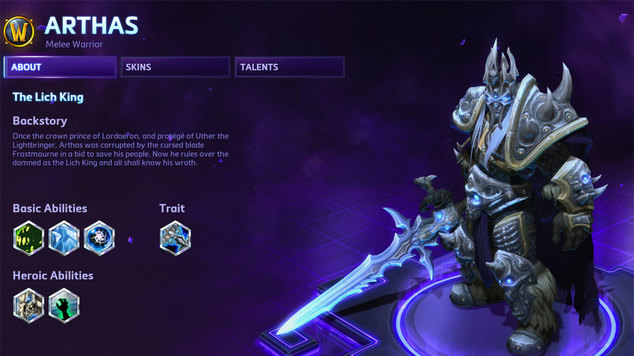 Arthas is a melee warrior character in Heroes of the Storm that comes from the Warcraft universe. He also just happens to be the Lich King, which makes him very powerful. He has talents that match abilities and themes from the World of Warcraft Wrath of the Lich King expansion, that focuses on cold and death.  These powers and abilities allow him to survive a long time and to help control opponents movements. Strengths

Death Coil (Q) [9 second cooldown] – This ability has two uses, it will deal damage if used against an enemy or can be targeted against yourself and will heal you.  Most of the time it is best to use it as a self heal rather than a damage ability when if fights.

Howling  Blast (W) [12 second cooldown] – This ability freezes the target in place for 1.5 seconds and deals a small amount of damage.  This is your ability that allows you to initiate team fights on your terms, freezing the target your team wants to focus in place to setup the kill.

Frozen Tempest (E) [1 second cooldown] – This ability is an aura that can be toggled either on or off as desired and consumes mana as it is left active.  It deals damage to all enemies in its AOE and slows them the longer they remain in it.  This lets you keep enemy players in range longer in a team fight.

Summon Sindragosa (R) [80 second cooldown] – This is the first of the level 10 options.  It deals damage to all enemies in its path and slows or freezes them, it also freezes structures for 20 seconds.  This ability helps setup engagements and disengages from fights by slowing the enemy team. Due to its ability to freeze enemy structures it also helps you destroy them since they will not be firing at you.

Army of the Dead (R) [100 second cooldown] – This is the second of the level 10 options. This ability summons a group of ghouls to fight by your side, each ghoul can also be sacrificed to heal yourself.  The ghouls last for 15 seconds.

Frostmourne Hungers (D) (12 second cooldown) – When activated this ability empowers your next basic attack, making it deal double damage and restores a small amount of mana.

Every hero in Heroes of the Storm has several talents that they gain access to as they level in each match.  Rather than look at every talent here, we will focus on the best at each level for what I believe is the best build out there for Arthas, which is one that focuses on controlling the fight and lasting as long as possible.  Some additional options are also provided.

At the first level there is only really one really good choice which is Frost Presence.  This talent reduces the cooldown by 3 seconds which is a 25% reduction allowing you to use it far more often.  This allows you to help setup fights or kills more often and really sets up advantages in team fights.

There is once again only one solid choice here, which is Frozen Wastes.  This reduces the mana cost of your Frozen Tempest ability by 3 mana per second, which allows you to keep it active for a significantly longer amount of time.  Since Frozen Tempest deals a lot of damage when in close with enemies it is a extremely strong ability.

This again only really provides one option to take, which is Rune Tap.  This talent heals you for 3% of your health every third basic attack. While 3% sounds like a small amount, it adds up over time.  There is a second option at this level, but is only really a good choice if you are facing a lot of enemies that have a lot of mobility.  If you do find your self fighting a team with high mobility then Frost Strike becomes a viable option since it slows down enemies hit by your Frostmourne Hungers attacks by 40% for a short time.

At this level you gain access to either Army of the Dead or Summon Sindragosa.  Army of the dead is a standard and very strong selection as it provides Arthas with a huge amount of healing.  Summoning the army and then sacrificing the for health in a team fight allows you to stay in the middle of a fight for longer than any other tank.  Summon Sindragosa is also a good option but only if your team is ahead and only if you are working as a team.  If taken in those situations then it can help push your team even further ahead,

This tier of talents has two more good options which are Immortal Coil and Stoneskin.  I prefer Immortal Coil as it allows you to use your Death Coil more aggressively since it will always heal you, but also boosts the healing it provides if you target yourself.  The other option, Stoneskin, can help keep you alive even when being focused down.  Which is better depends on which situation you find yourself in more often, needing healing or needing big damage prevention.

Your top level talents provide several options and most of them are really strong.  The best of them is Hardened Shield which makes Arthas almost impossible to kill for the 4 seconds that it is up.  Almost as good is Legion of Northrend which boosts the damage and healing that your Army of the Dead provides.  Lastly, if you took Summon Sindragosa then Absalute Zero is a good option as well as it allows you to affect far more targets at once.

Arthas has been one of the best tanks in the game right from the start of the alpha.  While he is limited in his mobility and escapes, he has a lot of CC and survivability which allows him to get into a fight, deal a lot of AOE damage with his aura, and live through a lot of incoming damage.

In the early game Arthas plays best when you can find a lane to push and kill off the incoming lane minions from the opponents team with your aura.  You can usually solo a lane pretty easily against most enemy players.  Arthas also makes a good floater in the early game, since he can join in on a lane where he was not expected, freeze an enemy hero and setup a kill very quickly.

Once the game reaches the middle levels and you gain access to your ultimate abilities, you have a choice to make.  Most of the time that choice will be Army of the Dead, but if you are in a strong position then Sindragosa may also be a good choice.  No matter which ultimate you do take, now is the time that you should start to group up and use your abilities to setup picks against enemy heroes.  This is also the time where death timers start to become important, so stay alive, do not be afraid to back out of fights.

Once the late game arrives you need to stay together with the team and help get kills.  Even though you may not be getting the killing blow, the constant AOE damage that you put out and the slows that you can cause, help set up team kills which are critical.  Death timers are even more important here at the end game, and while staying alive is important, sometimes Arthas can provide a lot to the team by staying in the fight for those few extra critical seconds that setup kills.  If you need to sacrifice yourself, do so, but only where it will ensure an advantage.  If you are going to die just to kill off one enemy player, then back out.  If by staying in the fight and dieing your team will kills 3 enemy players, then by all means sacrifice yourself.  Sure your team will be without a tank for 60 seconds, but the other team will be 3 men down for that time, ensuring your teams advantage.